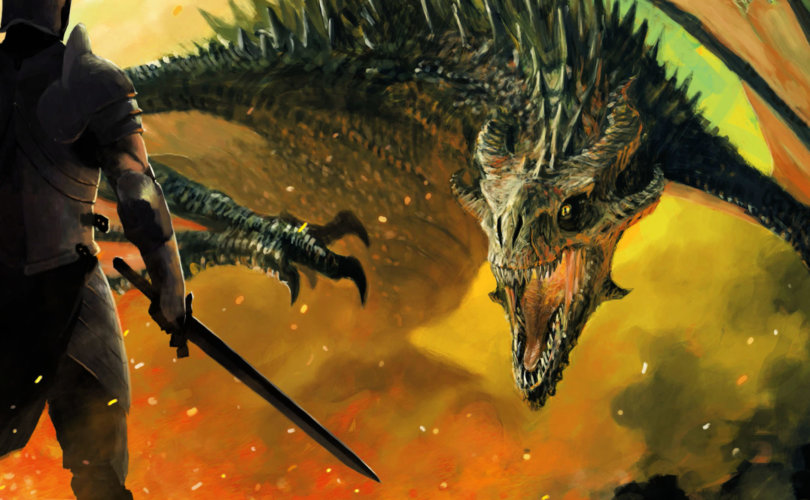 (LifeSiteNews) — In his recent video presentation titled, “Message to the Christian Churches,” Dr. Jordan Peterson thundered: “Ask more, not less, of [the young men] you are inviting. Ask more of them than anyone ever has!”

“Remind them who they are in the deepest sense and help them become that,” said the celebrated psychologist. “You’re churches, for God’s sake. Quit fighting for social justice. Quit saving the bloody planet. Attend to some souls — that’s what you’re supposed to do. That’s your holy duty.”

The left — mostly huddled under the umbrella of the Democrat Party here in the U.S. — has the worst beliefs, the worst creed, on Earth. But what we must appreciate is that they shout their beliefs from the housetop by every means available. They never give up, they never back down, while Christians speak in mostly subdued tones with hushed, apologetic voices.

The “Woke” are not ashamed. They are brazen carnival barkers peddling the worst ideas and practices known to man:  communism, abortion, transgenderism, same-sex marriage, homosexuality, and racism tidily wrapped up in identity politics and Critical Race Theory.

And while they unashamedly broadcast their inhuman, Luciferian messages night and day, Christians speak mostly to each other, not the world. And we do so softly, delicately, always ever-so-vigilant not to offend or to sound too zealous.

Here’s the thing: If anyone is going to change the world for the better, it is Christians, not leftists. Not the “Woke.” Not the social justice warriors. They are lunatics and monsters who defend infanticide, the genital mutilation of children, and the sexualization of young children by cross-dressing men prone to suicide. They promote the very things in which the demon world delights.

READ: President of women’s rights nonprofit cannot tell US congressman what a woman is

Religion-hating leftists exert an influence totally out of proportion to their real numbers, yet they seem to control all the levers of our modern society. In recent decades they have succeeded in decimating the family and marriages while murdering over 60 million children in their mothers’ wombs. With so many young people declaring themselves to be no-faith Nones, leftists are well underway to erasing God and eviscerating Christianity.

They win again and again and again. They capture the attention and imagination of society because of their firm dedication.  From sunup to sundown, they zealously pursue their cause. It’s what consumes their souls every minute of the day.

Catholics talk about membership in the mystical Body of Christ, but very few feel and experience that oneness and sense of purpose that pro-abortion, BLM, gay and trans activists, Marxists/progressives feel and experience in pursuit of their missions. For them, it’s always about oneness and solidarity with victims—and saving victims with their grandiose plans and schemes.  They burn with passion to save, but in reality, they impoverish, kill, and destroy.

Here’s the truth: We — Christians — have the only legitimate message of salvation. And more than that, we have the promise and reality of an entirely new life in Jesus Christ.

The more materialistic society becomes, the more dedicated men and women stand out. At this moment it’s the leftists, the “Woke,” who are standing out, not Christians.

Dr. Peterson is right: If the Church were to start making big demands — BIG ASKS — of her members, we would get a heroic response, heroic involvement, and heroic dedication.

Douglas Hyde, a post-World War II convert from communism to Catholicism whose words I have borrowed and amplified here, outlined all of this in his excellent guidebook, Dedication and Leadership:

When you have succeeded in making men believe that change is necessary and possible and that they are the ones who can achieve it; when you have convinced them that they and the small minority of whom they are a part can transform the world in their lifetime, they will achieve the impossible [emphasis added].

We are in the middle of an epic war, fighting against monstrously evil things.

This past week we saw female attorneys, medical professionals, and academics testify before a U.S. Senate committee on behalf of abortion rights. Matt Walsh noted that all “refused to condemn infanticide, refused to define the word ‘woman,’ and claimed that men can get pregnant.” And they did so with absolute impunity.

The elites who envision a Great Reset — bolstered by many government and quasi-government players, the abortion industry, the pharmaceutical industry, Big Tech, social media, legacy media, the Human Rights Campaign, GLAAD, and Black Lives Matter, and aided and abetted by most major corporations — have authored a new, fake, Christ-less gospel which they preach endlessly and with great enthusiasm.

All of these are arrayed against Christ and his Church.

Where are the men who will go into battle for Christ? For morality? For vulnerable children? For the victor’s crown that will last forever? As Dr. Peterson explained, this is what men are born to do:

The Christian church is there to remind people — young men included and perhaps even first and foremost — that they have a woman to find, a garden to walk in, a family to nurture, an ark to build, a land to conquer, a ladder to heaven to build, and the utter terrible catastrophe of life to face stalwartly in truth, devoted to love and without fear.

The world is languishing, groaning for the fullness of the Gospel message. The world is disintegrating, spiraling downward and out of control because of its ignorance and hostility toward Christ.

Why is that? Because the Catholic Church and the Protestant churches alongside her have become more concerned with being inoffensive and meek than with being bold and heroic. The visible Church from top to bottom — from the Pope to her prelates, to her priests, and to her people — has cowardly conformed to the world more than we’ve urged the world to conform to the Gospel.

No wonder men, especially young men, stay away from our feeble, effeminate, ruffled, granny-aproned Church who demands next to nothing from her members.

Men certainly are still poised to fight for their livelihoods, families, and way of life, if only they are called upon to do so.  Just look at the thousands of European farmers now standing in the breach against harmful environmental regulations inflicted by politicians in the thrall of the World Economic Forum. Their gallant defiance of the European elites’ Great Reset agenda is inspiring, reminding us that men are indeed still men.

In his book Rules for Radicals, communist Saul Alinsky said people have to see that they are fighting on the side of the angels while the other side is aligned with the devil. The atheist author and activist who obliquely dedicated his book to Lucifer let us know exactly what we need to know.

We are on a crusade from here on out, a crusade which requires the leadership, courage, strength, and energy of men — MEN — fighting on behalf of Christ, for the sake of the Church, their families, and the world.