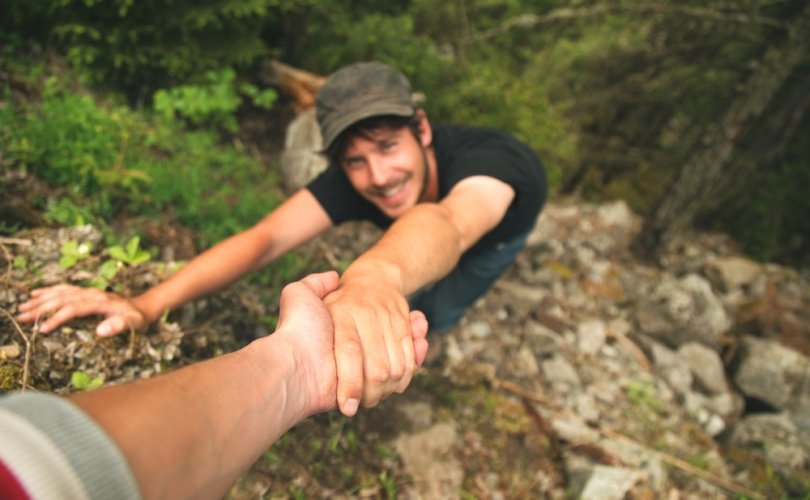 December 5, 2017 (LifeSiteNews) — Christians are not commanded to simply “tolerate” their neighbors, they are commanded to love their neighbors—and love, in the Christian tradition, is not simply a feeling of warmth or affection, it is quite literally to desire the other’s good.

Progressives, however, do not mean that we should all tolerate people—they mean that everyone must tolerate behaviors and lifestyles, regardless of whether some believe those lifestyles and behaviors to be harmful, and thus incompatible with desiring the other’s good.

One example of this trend is how Christians in North America are being smeared with the “homophobia” label.

Being labeled “homophobic” today doesn’t actually mean that you fear or hate gay people. What it simply means is that you disagree some parts of the LGBTQ agenda, whether that be gay “marriage” or transgender pronouns or religious liberty. In fact, you can have friends or family members who are members of this community that you know and love, and this doesn’t matter—the question is, will you give unqualified support to the entire political agenda of this particular movement, regardless of your own sincerely-held beliefs?

The case of Trinity Western University, which was before Canada’s Supreme Court last week, is one good example of this. Trinity Western has a “Community Covenant” that students agree to, a covenant which essentially reiterates the two-millennia-old Christian view that sexual relations should be confined to monogamous, heterosexual marriage.

Several gay students, after initially agreeing to this covenant, have later claimed that it was a terrible, awful thing—regardless of the fact that they voluntarily agreed to it.

One Trinity Western alumnus, who has been a prominent advocate of remaking TWU to suit the standards of the LGBTQ community, admits that he “felt bolstered by a supportive social circle at Trinity Western University” but that the existence of a covenant that expressed disapproval of the gay lifestyle felt “violating.”

A number of LGBTQ Trinity Western alumni, who openly admit that the staff and students at TWU treated them with love, respect, and compassion, have still decided to launch a full-scale and vitriolic attack on their alma mater, claiming that the university’s dedication to traditional Christian values is hurtful to them.

A scan of these debates on social media is jarring—the level of anger is often through the roof. Other TWU alumni express confusion—the very people attacking TWU, they point out, were treated no differently than anyone else, and would admit this themselves.

So why the attacks on the Christian identity of TWU? Why the insistence on attacking other TWU alumni on social media, often former friends of theirs—simply because those friends still hold to the traditional view of marriage?

It is because the LGBTQ movement has taught a generation that genuine love and compassion are not what is most important, it is tolerance–tolerance at the expense of everything else–that matters.

Another recent Canadian example would be the attempt of Alberta’s ruling NDP party to smear United Conservative Party leader Jason Kenney as a bigot bent on cruelly “outing” gay kids for his opposition to Bill 24.

Kenney opposed gay “marriage” when that debate raged nearly a decade ago, as did many other MPs—including some still sitting in the Liberal caucus. But, he also worked to bring gay men who would have been targeted for execution out of the Middle East and to safety in Canada during the Harper years, a fact that directly contradicts the “homophobe” label progressives would like to saddle him with.

So Jason Kenney, a man directly responsible for saving members of the LGBTQ community from execution by creating an “underground railroad” to bring them to safety in Canada, is still a “homophobe.” In fact, he’s a “homophobe” according to Rachel Notley’s NDP even though as a young man, he volunteered for several years at an AIDS hospice—and at the height of the crisis, when some still thought that AIDS could be infectious. He sat at the bedsides of dying men to offer them words of comfort. He served dying members of the gay community when some were alone and abandoned by everyone else.

This man is Rachel Notley’s version of a “homophobe.”

The same is true of Liberty University, the Christian institution established by controversial pastor Dr. Jerry Falwell in Lynchburg, Virginia. Many progressives view Liberty as a hotbed of “homophobic” evangelicals bent on establishing theocracy in America. But this caricature is far from the truth, as journalist Kevin Roose discovered when he decided to leave Brown University to go undercover for a semester at Liberty to discover what his evangelical counterparts believed and how they lived. His resulting book, The Unlikely Disciple: A Sinner’s Semester at America’s Holiest University, smashed the very stereotypes many expected his project to affirm.

Roose’s findings were corroborated by an essay published several years ago in The Atlantic, titled “Being Gay at Jerry Falwell’s University.” Brandon Ambrosino describes coming out to Dr. Karen Swallow Prior, an English professor at Liberty:

“Homosexuality!” I blurted. “I've been struggling with homosex…” and I broke down. Here I was in the English chair's office at the world's most homophobic university, and I'd just admitted to her I was gay.

She got up from her chair, and rushed over to me. I braced myself for the lecture I was going to receive, for the insults she would hurl, for the ridicule I would endure. I knew how Christians were, and how they clung to their beliefs about homosexuals and Sodom and Gomorrah, and how disgusted they were by gay people. The tears fell more freely now because I really liked this teacher, and now I ruined our relationship.

“I love you,” she said. I stopped crying for a second and looked up at her. Here was this conservative, pro-life, pro-marriage woman who taught lectures like “The Biblical Basis for Studying Literature,” and here she was kneeling down on the floor next me, rubbing my back, and going against every stereotype I'd held about Bible-believing, right-leaning, gun-slinging Christians.

When I heard her sniffle, I looked up at her. “It's going to be ok,” she said. “You're ok.” She nodded her head, squeezed my shoulder, and repeated, “I love you.”

That experience, Ambrosino writes, reflects the reaction he got from most at Liberty University. That, Trinity Western University alumni tell me, is how any students coming out at TWU were treated, too—with love.

But progressives insist that those who hold the Christian view of sexuality must be hateful—even if everything faithful Christians do contradicts that label, and even if they harbor not a single hateful thought or feeling.

“Tolerance” and “love” are not the same thing. Calling Christians “homophobic” who have no fear of or hatred for gay people is also profoundly deceitful and counterproductive.

It is possible to disagree without hatred or bigotry.

I know this because I have many friends with whom I have profound disagreements, and we still have enormous mutual respect for each other. To claim that disagreement is hatred is to intentionally make the entire debate about what is good for people and what makes us human a toxic one, rife with suspicions.

There is no need for this to be the case.

When progressive politicians claim that a man who served gay men dying of AIDS is “homophobic,” they are gutting that term of all it’s intended meaning. When LGBTQ activists claim that Christian friends who believe in traditional marriage are hateful bigots, they are sowing hatred where none exists.

Tolerance is easy. Love is hard. But loving, at the end of the day, is what Christians are commanded to do.

Editor’s note: Earlier this year, van Maron wrote a column explaining why the cardinal virtue promoted by the progressives—“tolerance”—is actually just an inadequate replacement for (and cheap counterfeit of) Christian love.