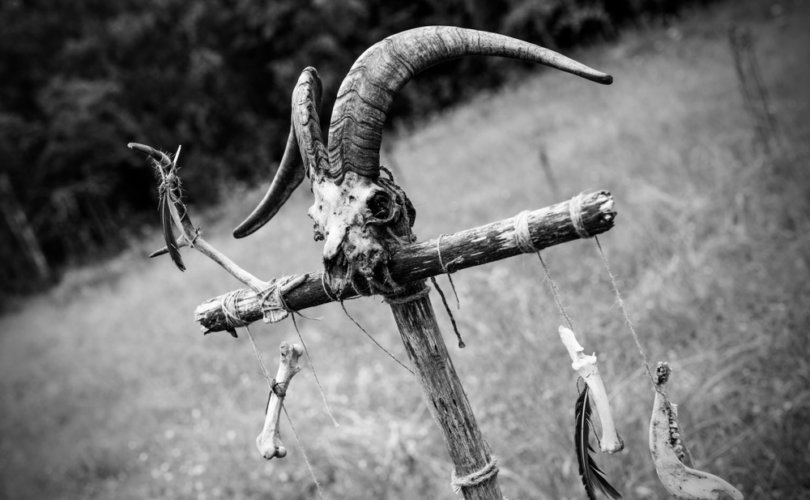 June 15, 2020 (LifeSiteNews) — When St. Boniface traveled from Devon in England to convert the pagans of Germany in the 8th century, he did so with supernatural courage. The Germans’ savagery had been notorious for centuries, and they did, indeed, eventually martyr him, while he was traveling in Frisia (now the Netherlands) in the year 754. Fourteen centuries on, it seems that the pagans have returned to Devon. A stone statue of him in the small town of Crediton has had sprayed onto its pedestal the words “God is dead” and “Pagan justice,” the latter accompanied by a pentangle, the symbol of Satanism.

There is a lot of neo-paganism in England’s bucolic southwest. Glastonbury, some way to the north and east of Crediton, is a particular center. The incongruous combination of messages — suggesting atheism, paganism, and Satanism — is characteristic of the more militant varieties. The local newspaper describes the attackers as “anarchists,” which may be a fair description but seems intended to distract attention from the central point: that this vandalism has got nothing to do with the riots in the United States or London but is the manifestation of local anti-Christian hatred.

Pagan attacks on Christian and above all Catholic symbols and churches are nothing new. What the secular press would rather not say is that Christians are the targets of a sustained, if low-level, campaign of physical and spiritual violence: thefts, vandalism, and sacrilege. That this is so is very clear, talking to Catholics in this part of England, and also to pagan converts to the Faith. Neo-pagans are not all dreamy nature-lovers. It is common for them to harbor a deep antipathy to Christianity.

In the system of political correctness, prejudice, discrimination, and even violence toward Christians is not regarded as very problematic, because Christians are stereotyped as aggressors, not victims. Christians attacked by neo-pagans, or by secularists, or indeed anyone else, can expect scant sympathy from the dominant opinion-formers of our society. Even Christians from minority ethnic groups are bypassed in the contest of victimhood: indeed, Asian and African Christians can find it particularly difficult to make themselves heard, for their very existence seems to contradict the favored worldview.

In past eras, it was often difficult for political leaders and the press to get complete and accurate information about who was doing what to whom, and why, in conflicts at home or abroad. Falling back on stereotypes in that situation was at least understandable. Today, we have a very different problem: of the press and politicians steadfastly ignoring facts that are repeatedly drawn to their attention when they don’t fit into a favored narrative. I wonder if there has ever been a time in history when ideology has so effectively distorted what is reported, discussed, and regarded as important.

This ideology is deeply engrained in journalists, and it is being aggressively taught to the young in schools. As antipathy to Christianity increases, we can expect to suffer while the world looks the other way. We have already seen this kind of thing: if the wrong kinds of victims are attacked by the wrong kinds of criminals — people who are not behaving according to the approved stereotype — police, social workers, and the education system appear incapable of responding in an appropriate way.

One part of Christians’ response to this situation must be a greater sense of solidarity and mutual support. This seems a distant prospect, however, while our leaders, both clerical and lay, are focusing their efforts on trying to prove their woke credentials. Nothing could be more embarrassing to the Anglican (Episcopalian) Archbishop Justin Welby, as he performs rituals of self-abnegation over “the sins of my British colonial history” in India, than the fate of Indian and Pakistani Christians who face violence in their own countries, or the black Evangelical Christians arrested in British cities for quoting the Bible in public.

I’m sure that on a personal level, he sympathizes with these victims, but I’ve never heard of him or any other Anglican bishop campaigning on their behalf. Sadly, I can’t claim that Catholic leaders are much better.

Catholics cannot wait for better bishops, and we get the lay opinion-formers we deserve. We should be focusing our concern on those who are, in the words of St. Paul, “of the household of the Faith” (Gal. 6:10). We will be told this is tribalism and sectarianism, but actually such an attitude is simply what it means to belong to a community. St. John admonishes us: “Wonder not, brethren, if the world hate you” and commands us to charity toward our fellow Christians. “But whoso hath the world’s goods, and beholdeth his brother in need, and shutteth up his compassion from him, how doth the love of God abide in him?” (1 John 3:13; 17).