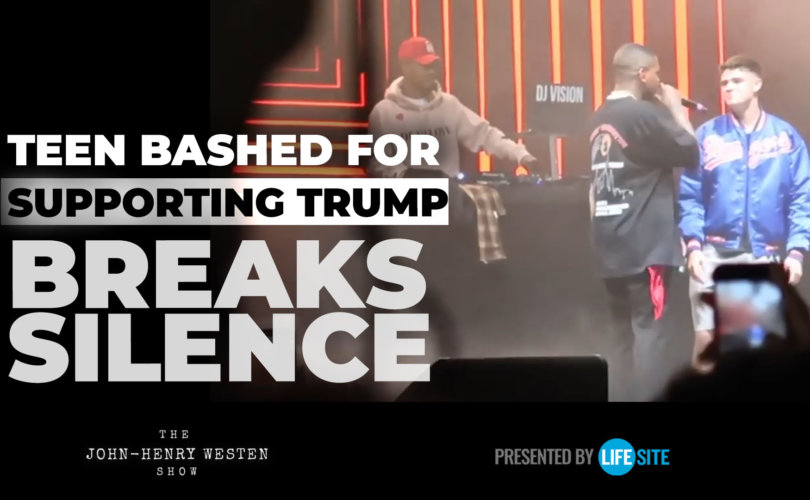 February 25, 2020 (LifeSiteNews) — There is an incredible story blowing up on the internet now. An 18-year-old Christian young man who was publicly humiliated in a most extreme manner at a music festival for refusing to say, “F*** Trump!” on stage has come out with an incredible letter of forgiveness. The foul-mouthed rapper, YG, physically pushed the young man and cursed him, calling him a racist while kicking him off the stage.

The readings at Mass this Sunday were about Our Lord’s admonition to turn the other cheek and to pray for your enemies and those who persecute you. There couldn’t be a more fitting example this week than that of Austin Joyner.

Austin turned 18 on Oct 27, 2019. For his birthday, he went with three friends to the two-day Mala Luna music festival in San Antonio, Texas. One of the musicians playing the concert was rapper Keenon Jackson — known as YG — who is famous for his “F*** Donald Trump!” song.

As he was performing, YG noticed that Austin, who was near the front, was not singing. So YG called him up on stage.

YG asked him to decide to say, “F-Donald Trump!” and to say his name because he knew his mother, father, grandmother, and grandfather were watching. When Austin refused, YG shoved him and hurled a barrage of curses at the young man for being a Trump supporter.

Here’s a video of what happened pic.twitter.com/K1Ymc9zlrQ

It took Austin until February 22, 2020 to prayerfully discern how to respond. And he has with a most beautiful letter which exemplifies Christ’s admonition to pray for your enemies and to turn the other cheek.

Austin explains in his letter that he was very nervous when he was singled out of the crowd. But he felt supported by the Holy Spirit. Here are his own words:

When I got up on the stage the Holy Spirit immediately took over. God was on my side. I was too nervous to handle that situation by myself. YG — you attempted to get me to curse someone publicly and to reveal my name to everyone. You may carry hatred in your heart for people like President Trump and me, but I don’t hate anyone, including you.

You don’t know me at all and you judged me completely wrong. I am a proud Christian, and I don’t talk about people that way. If the situation had been different and you asked me to curse President Obama or Hilary Clinton, I still would never have done that because I know that their lives have value just like yours and mine. You didn’t respect the fact that I said no, so you slandered me to the crowd and called me a racist.

Ironically, of the three friends who were celebrating my birthday with me, one is HIspanic and the other two are Nigerian. Also, my Mom is Mexican and my Dad is white. Clearly, I am not a racist and never have been. You misjudged everything about me. I’m sticking up for myself because I have the strength of God in me, but many people don't have that and just because you have a platform, that’s no excuse for you to use others to make your political statements.”

But the most incredible part of his letter comes as Austin addresses YG personally.

“You put a target on my back that night and made it unsafe for me at the festival. Thankfully two security guards came up to me after you kicked me off stage. They advised me to leave because they determined it was too risky for me to stay there at that point.”

Now think about this. There was a 17-year-old celebrating his 18th birthday with three friends at an overnight music festival and he was grossly, publicly humiliated and then told to leave the event for his own safety, spoiling his birthday and resulting in what for many would have been a life-altering negative encounter that could have led to disaster. Yet, as the good book says, “All things work for good for those who love Him!”

Austin recounts in his letter to YG the following:

As I drove home nervous and not knowing what to expect, I still prayed for you, because you, Keenan, still deserve and need God. Your actions were so wrong, but can be forgiven. Jesus did not die on that cross for no reason. And because of that, I have kept you in many of my prayers. So if you think no one has cared about you, I have.

WOW what incredible love this young man shows! Reminiscent of, “Father forgive them for they know not what they are doing”.

It has taken a few months for me to fully forgive you, but I did not want to respond to the incident until I did forgive. I forgave you on January 4, 2020. I really don’t want to hold on to those type of feelings. Because God created you with purpose, Keenan Jackson has the power to do great things in this world, I’m speaking it into existence. God is pursuing you and it’s going to become obvious to you, but God isn’t going to force himself into your life. That’s something you’ll have to accept if you want him. But if you ask me, it’s a strange coincidence you picked on a supposedly racist white boy like me out of all people in the crowd that night.”

He’s referring here of course to the fact that he is of Mexican heritage on his Mom’s side. And Austin speaks right into the heart of YG:

You have the potential to become a man who loves cherishes his wife and children, protects them, and treats them with utmost respect and stands up for people who are weak. Ultimately that’s how real men behave. I believe that you could even make the type of transition Kanye West has made. In the end I want you to succeed and I want you to become the man God designed you to be. I can keep writing about how great it would be but that is a decision you would have to make for yourself. I hope you take advantage of the opportunity you have.

Now let me close this episode with an amazing insight that I received from Exodus 90, a 90-day practice of fasting and asceticism I’ve taken on with some friends. Jesus invites us to take up our crosses and follow Him. Strangely though, He says, “My yoke is easy and my burden is light” Yet, we often feel our burden is very heavy sometimes, too heavy to bear in fact.

How did poor Austin feel experiencing what he did? How do we feel when we get into a car accident or are ridiculed by our spouse or our colleagues? There seems to be nothing easy or light about these crosses or burdens we are sometimes asked to carry. And yet we are told the saints would rejoice in adversity, in hardship! How is that even possible?

We know the line ‘offer it up’ which we should also know means offering up our sacrifices and sufferings in union with the Holy Sacrifice of the Mass the Sacrifice of Christ and Calvary. But still how do we get to that joy or rejoicing in such hardships?

Well, here is the example from Exodus 90 which made things clearer for me than they ever have been before.

Picture yourself sitting on a city bench in the bitter cold waiting for a bus late by 25 minutes. It’s freezing cold and snowing and you get more and more miserable by the second.

Now picture yourself on a similar bench on a similar cold and snowy day. Only this time, the bench is suspended from a cable, and it’s moving toward the top of a mountain peak. You aren’t aggravated or cynical about the cold and the snow. Instead, you are stoked and overflowing with joy. In fact, you paid good money to be out in these elements because these seemingly adverse things (the bitter cold, the uncomfortable bench, and the dumping snow) will gain for you the chance to be waist-deep in an iconic powder day skiing. As a skier, you possess the eyes to see the value of your ride on a chairlift. Thus, even this bitter cold moment is sweet.

There it is! There is the key to seeing your sufferings as an awesome opportunity to offer something worthy to the Lord in union with the Holy Sacrifice of the Mass. A gift to the Eternal Father is worth suffering for.

Let us see in all the adversities that Our Lord permits to come our way that this is our opportunity to offer something to Our Lord; to assist Him in a small way in the salvation of the world; to make a worthy gift to Our Saviour; to accept a small share of that suffering which He endured so that we might be co-redeemers with him and can repeat with St. Paul, “I make up in my own body that which is lacking in the sufferings of Christ.”

What lack is there in Christ’s sufferings? Only that which He intentionally left for us to do so that we could reign with Him in glory forever.

Let’s do good to our enemies and pray for those who persecute us just like Austin Joyner did this week.