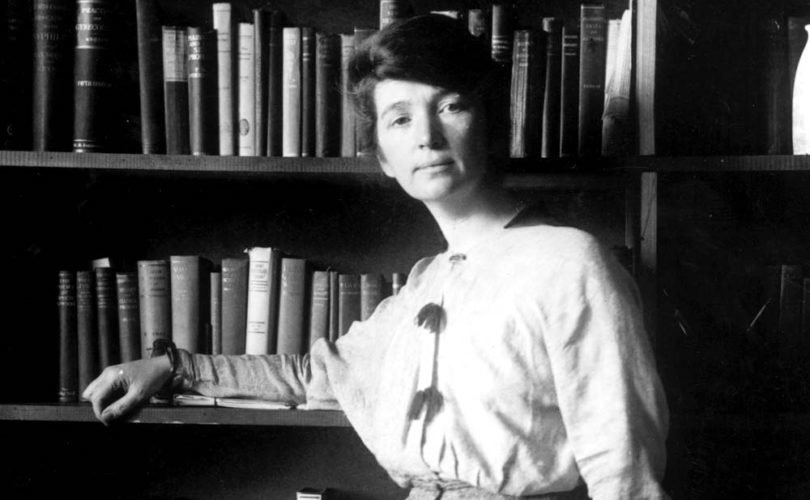 Christianity Today, founded by none other than Billy Graham, is not only the name of a popular magazine/global ministry source for Evangelicals, it’s a phrase that makes one wonder: “What is Christianity today?” I would suggest, in too many ways, it’s largely disconnected from the Christ that inspired it.

“I do not mean to excuse Sanger for holding these views, but I do want to give the charge of ‘eugenicist’ a more complete background,” writes Stone as she chooses to give a selective background of the inarguably racist, elitist and anti-Christian worldview of one of the leading members of the American Eugenics Society. (If she wanted a more complete background, she could easily have watched Maafa21 and gotten a thorough perspective on the mother of Planned Parenthood.) Instead, she proudly tweeted: “I am @amyjuliabecker’s blog today, defending #MargaretSanger and talking about how #birthcontrol saves lives.” (Thanks to SaynSumthn blog for screen grabbing the tweet!) Stone has since removed the tweet and later claimed defending Sanger was not her “primary concern.” She listed it first in her tweet and the subtitle to the article is: “Reconsidering Margaret Sanger as one who was opposed to abortion but emphatic about the personal and social good of contraception.” That seems quite primary to me.

Her twitter responses further illuminated a cluelessness about the central figure in her article, stating in several different tweets that: “I believe I did not accurately estimate how great a distraction the Sanger example would be. In her early days, she was motivated by compassion for the least of these.”

Yeah, not so much. From Sanger’s early days (she established her first “clinic” in NYC in 1916) to her dying days (in 1966), her eugenic views about birth control and human life were despicable. Here are just a few Sanger quotes (from her own writings) that span the entire spectrum of her public activism:

Granted, Stone somewhat alludes to Sanger’s eugenic views, but then excuses them because other “medical professionals” held the same ones. Well, they were just as wrong. From Sanger’s first public moments to the end of her life, her repugnant views never changed…just the semantics. After World War II, for instance, it wasn’t as popular to talk about forced sterilizations in light of the American Eugenics export of “racial hygiene theory” and the Holocaust that was based and implemented on its pseudoscientific lies. So Sanger suggested “voluntary” sterilizations of humans who were “unfit” to reproduce.

I find that certain liberals love their anecdotes but have such an aversion to history. It seems to be all about feelings. It’s all about the emotional devoid of the evidential.

I just returned from speaking on a panel at the United Nations, “Living Cooperation: Sexual Rights and Religious Rights at the UN”, which was part of a 2-week long conference for the Commission on the Status of Women (#CSW59). The panel consisted of 6 speakers. I joined 2 others from C-Fam (Center for Family and Human Rights) who shared a pro-life/pro-family worldview. Three other speakers (SisterSong, Muslims for Progressive Values, and International Gay and Lesbian Human Rights Commission), and the moderator shared a pro-abortion, pro-redefined-family/LGBT worldview. The conversation was wonderfully respectful and allowed some great dialogue. The interesting commonality among those who advocated for abortion and LGBT “rights” was that feelings were the basis of truth…not biological facts, not history, not statistics…just the emotional.

Monica Simpson, the ever-affable Executive Director of SisterSong, made the common claim about abortion reducing maternal mortality using Georgia as an example (giving rates but not actual numbers). Just to clarify, in 2007, 548 women sadly died throughout the entire United States from pregnancy complications; there were over 1.2 million abortions.  I responded to Simpson that the Maternal Mortality Rate (MMR) in America plummeted from 574.3 per 100,000 live births in 1917 to 26.1 per 100,000 live births in 1970 all without legalizing abortion (see infographic). It was medical advances like penicillin and sterilized medical equipment and environments and better healthcare that led to this drastic decline in deaths—not abortion and not contraception.

Better healthcare for women before, during and after pregnancy is the solution–not cancer-causing oral contraceptives, bone-density reducing Depo Provera, and billion-dollar population-control organizations like the Bill and Melinda Gates Foundation (promoted in her article) which believes in achieving a very eugenic “zero population growth” (because humans, in the pseudoscience of eugenics, are the scourge upon the earth…well, at least those deemed “less fit” to live). In this alarmist TED presentation that addresses the need to stop population growth to “save the planet” (see video here starting at 2:28), Bill Gates says: “First we got population. The world today has 6.8 billion people. That’s headed up to about 9 billion. Now if we do a really great job on new vaccines, health care, reproductive health services, we could lower that by perhaps 10 or 15 percent.” How do vaccinations reduce population growth? How does better healthcare reduce population growth? Only efforts like sterilization, birth control and abortion prevent and/or eliminate reproduction. This may explain why the Gates Foundation gives millions of dollars to Planned Parenthood.

Perhaps Stone, like many other liberal evangelicals, is naïve about global “family planning” funding and that it is inseparable from abortion. Perhaps Stone would rather ignore the 320% risk increase of Triple Negative Breast Cancer (TNBC) that women who use oral contraceptives (OC) face over those who don’t use OC (Louise Brinton, Ph.D., Branch Chief and Senior Investigator of the National Institutes of Health’s National Cancer Institute, was one of the lead researchers in this study that is ignored by her own employer). Perhaps Stone knows nothing of the clandestine and immoral Depo-Provera human experiments and how the injectable drug is aimed at primarily African countries. It is, by the way, the “birth control” choice of Melinda Gates’ efforts.

Stone uses old disputed data that, if one spent any time researching, would realize is a conjured stat from the Guttmacher Institute and the World Health Organization (WHO). She promotes the false narrative of 68,000 women dying from “unsafe” abortions, globally, as proof for the need for contraception. Guttmacher has revised this “stat” to 47,000 several years ago, although it doesn’t change the fact that the Planned Parenthood-funded organization cites the WHO as the source of the data, who then cites Guttmacher as the source of the data. Nice circular citation. She does realize, I hope, that abortion is always unsafe for at least one of the human beings involved and often for both mother and child (whether in a legal or an illegal abortion).

In fact, Stone then plugs a “study” done by Guttmacher (although her link goes nowhere, this is the study she’s regurgitating) that extols all of the alleged “benefits” of contraception with the typical unsubstantiated “stats” that the pro-abortion think tank is known for. The study is jointly done, by the way, by the UNFPA (formerly known as the United Nations Fund for Population Activities but now with the acronym-challenged name of United Nations Population Fund) which has been instrumentally involved in supporting and enabling China’s barbaric One-Child Policy. Contraception, here in the U.S., has not reduced our national unintended pregnancy rate. In 1995, according to the CDC, that rate was 49%. Twenty years later, even Guttmacher admits that the rate has only increased; it is 51% today. So with more access to contraception than ever before, we face more unintended pregnancies. And Guttmacher declared: “The truth is that behind virtually every abortion is an unintended pregnancy.” So, if there seems to be a correlation between higher contraceptive use and “unintended” pregnancy (which leads to abortion), shouldn’t there be a more honest conversation about all of this?

One would think that Stone, as a professing Christian, would do more to discover truth since it’s Truth that truly saves people lives, not birth control.