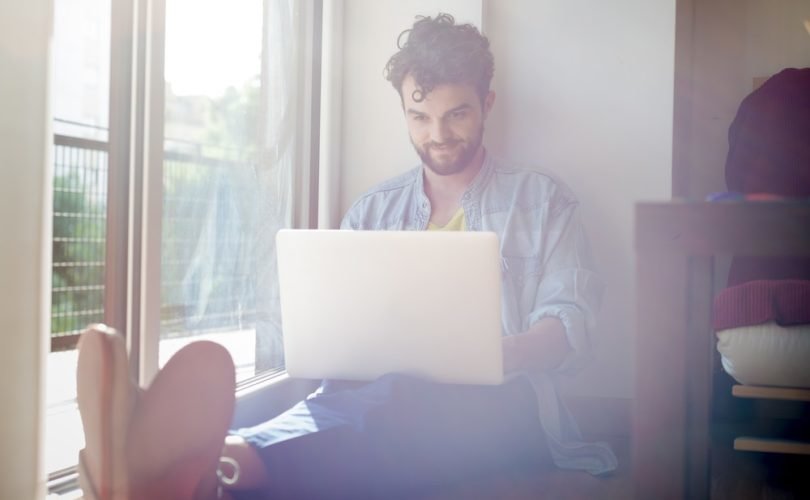 Knowing the vast and powerful impact of the media, [the Church] never tires of reminding communications workers of the dangers arising from the manipulation of truth. Indeed, what truth can there be in films, shows, and radio and television programs dominated by pornography and violence? Do these really serve the truth about man?

This is a very important question. Should not our recreational activities restore us, our leisure pursuits lead us more deeply into the truth of things? It would be an evil if the media to which we gave our attention were, in obvious or subtle ways, to take us away from moral and intellectual virtue, the love of beauty, and the ultimate truth for which we are made.

When we watch acts of lust or cruelty, we tend to become more lustful and cruel. What you look on with your eyes, you invite into your soul. How much of the so-called “entertainment” fare of our age falls into this category?

Fr. Legge is following the Angelic Doctor, who writes in the Summa:

The seeing of sights becomes sinful when it renders a man prone to the vices of lust and cruelty on account of things he sees represented. Hence Chrysostom says that such sights make men adulterers and shameless. (ST II-II 167.2 ad 2)

Another result of watching lust and cruelty portrayed graphically is that one can become indifferent to it and even callous about it, becoming numbed to the objective moral evil and sluggish in reacting with appropriate disgust and repentance. If I watch movie stars fornicating or murdering, I will have one of three responses: I will be moved in sympathy with what they are doing, which is sinful for me, or I will be indifferent to it, which is also sinful, or I will feel disgust. Feeling disgust for evil is right, but we are not supposed to go out of our way voluntarily to seek disgusting things.

There is, moreover, already a reason for caution and self-control in how much we watch to begin with, having to do with the nature of modern media. Movies, in particular, exercise a kind of “strong magic” because they fill the soul with hyperdefined imagery, overly potent images (called “phantasms” by Aristotle and St. Thomas). The soul cannot resist the influx and is molded accordingly. The medium tends toward a stimulation excessive for the faculties of a rational animal: too much for the animal, too little for the rational. It appeals primarily to the senses of the flesh and thereby induces a pragmatic primacy of matter over mind. Our memories and dreams become saturated with what we watch and listen to.

Sertillanges in The Intellectual Life rightly notes that we should prize and protect our interior purity and quietude. It is difficult for fallen creatures like ourselves to remain unstained in the midst of a corrupt generation and to keep our minds fixed on things above, as Scripture tells us to do. It is even more difficult to achieve inner silence and recollection for prayer. One wonders, then, what the great mystics would say about TV and movies. Think of St. Teresa of Jesus, St. John of the Cross, St. Thérèse of the Child Jesus, St. Elizabeth of the Trinity: would they not consider most of what people watch today to be, at best, a colossal waste of time, at worst, a pollution of the soul?

“Do I make my plans like a worldly man, ready to say Yes and No at once? As surely as God is faithful, our word to you has not been Yes and No” (2 Cor. 1:17–18). “But fornication and all impurity or covetousness must not even be named among you, as is fitting among saints. Let there be no filthiness, nor silly talk, nor levity, which are not fitting; but instead let there be thanksgiving” (Eph. 5:3–4). If we need sophisticated and elliptical arguments to justify something we are listening to or watching (or, for that matter, reading), we are probably guilty of trying to say Yes and No to Christ. How a Christian lives his life, what he spends his time on, where he puts his mind and heart should be utterly consistent with the Faith he professes.

The most stirring exhortation along these lines is found in the Letter to the Philippians: “Whatsoever things are true, whatsoever modest, whatsoever just, whatsoever holy, whatsoever lovely, whatsoever of good fame, if there be any virtue, if any praise of discipline, think on these things” (Phil. 4:8). Implied is a warning: do not think about, let alone linger over and soak in, the contrary of these things, for that will make your soul less Christian and less fully human. We don’t see here the false belief that the way to become a “fuller” person is to be “exposed” to a lot of evil, if only vicariously, so that one can better understand it and combat it — the weak argument to which proponents of modern media so often have recourse.

This argument has a certain strength in connection with literary portrayals of evil, if they are tastefully done, because the potency of the content is filtered through the intellect of the reader, who must first understand the words and concepts before he can, to some extent, re-create the scene in his imagination. The medium allows for the visceral impact of evil to be mediated by a spiritual process. With film, however, the image is taken straight in through the eyes, even as the dialogue and soundtrack are taken in by the ears; there is an immediacy that does not filter or interpret the content in the act of reception.

Nor are the consequences limited to the moral sphere; they extend to the intellectual as well. One watches a movie “effortlessly” — and that is exactly what is wrong with it. How many people today know how to entertain themselves by the use of their own intellects and imaginations? Why are we so passive, dependent on a giant money-making industry that homogenizes culture, instead of locally producing beautiful things ourselves, or at least actively assimilating a work of art?

Movies make unreality seem like reality — with the gradual effect, perhaps, of making reality seem like unreality. Movies and life blend together into a flickering phantasmagoria with no moral or eternal consequences. In the movies, dozens, hundreds, thousands of people get shot up on the screens in front of us: life is cheap, and violence is good entertainment. Should we be surprised when moderns are prepared to throw away the lives of unborn children or the elderly? Explicit sexual content is a non-negotiable titillation, and, in general, evil is treated as a spice in the recipe. Should we be surprised at the promiscuity, cheapness, and weirdness of modern sexual behavior, when images of the same are regularly impressed on the imaginations of millions of people? In the company of our entertainment, we are descending into a barbarism worse than that of the ancient pagans, because they, at least, had not enjoyed the benefit of Christianity to heal and elevate them.

Would I say we should never watch movies or TV? No. There are indeed some fine artistic movies that do not indulge in gratuitous evil. But the Word of God exhorts us to vigilance, careful discrimination, and a holy ruthlessness with our own tendency to cut corners, make excuses, and relax standards. We should adopt for all media the wise attitude of St. Basil the Great toward pagan authors. He says:

When they recount the words and deeds of good men, you should both love and imitate them, earnestly emulating such conduct. But when they portray base conduct, you must flee from them and stop up your ears, as Odysseus is said to have fled past the song of the sirens, for familiarity with evil writings paves the way for evil deeds. Therefore the soul must be guarded with great care, lest through our love for letters it receive some contamination unawares, as men drink in poison with honey.

If that is true of “letters” — i.e., literature — is it not a thousand times more true of movies and TV and many other forms of today’s popular entertainment?

As Christians, we need to be engaged in the effort of drawing our dispersed energies and faculties together in a focus on the Holy Trinity dwelling in our soul and outwardly displayed in the beauty of God’s creation. Modernity in general, and popular entertainment in particular, wages war on the created order and on our interiority, our “interior castle.” The constant buzz and fuzz of worldly images and noise distract us from the pursuit of the unum necessarium, the “one thing needful.”