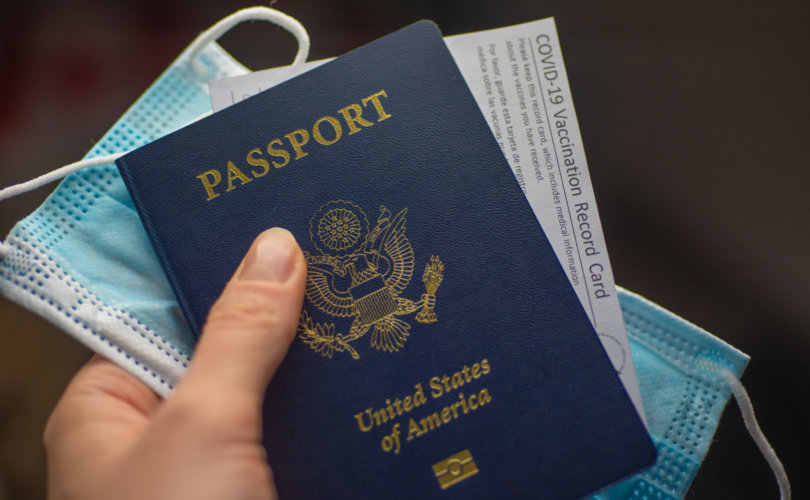 (LifeSiteNews) — It’s generally a truism that things speed up in the end. Whether we are getting closer to the reign of the anti-Christ or not, what’s undeniable is that the “Great Reset” is being implemented at breakneck speed.

Sinister men like Klaus Schwab from the World Economic Forum are leveraging this moment to literally re-create mankind (and society) from the ground up.

This is all a diabolical mimicking of the one and only Great Reset — the death of Christ on the cross that freed us from the chains of original sin.

The COVID jab represents a baptism into the new world order cult, a sort of cleansing ritual whereby one is granted basic human rights. Those who reject this sacrament from Satan are judged as heathens to be excommunicated from public life.

Until everyone submits to this communist roll out, “new variants” of the virus will continue to be discovered and hyped by the media. Eventually, new “booster” shots will be released every few months. The corrupt generals of this invisible regime, which has Satan at its head, want to stack the deck so high that it’ll be impossible for ordinary folks to resist getting at least one shot.

Everywhere you look, more and more countries and businesses are requiring proof that you’ve been injected with this de-population cocktail. In Michigan, where I live, hospitals are demanding employees get the jab or get fired. Multinational corporations are starting to do the same. International travel will likely require the shot in the not-so-distant future, too. Domestic airfare would probably follow suit.

Already at the Vatican, visitors need to show a Green Pass before visiting the museums. Pope Francis shamefully joined with the media’s mocking of Cardinal Burke for being outspoken on COVID and then ending up in the hospital because of it.

Another reason the COVID injection may well be the mark of the beast is that it has a transhumanist element to it. Just like the artificial food we eat and the phony pharmaceutical drugs we take, it’s geared toward subtly changing what we are as human beings.

Many pregnant women, for instance, have reported miscarriages after receiving the shot. Young people are having major heart problems in response to it, too. The human body is simply not designed by God to properly handle the ingredients in it.

Millions of people may die this coming fall and winter thanks to the jab having compromised their immune system, which won’t be able to fight off a common cold. The “unvaccinated” will likely be blamed if and when that happens. This has all been predicted in Hollywood movies for decades.

What we’re witnessing is a complete re-vamping of mankind in the image and likeness of the prince of this world. Many people across the world will seek to claim religious exemptions to remain injection-free. Others may retire from their work early. But communism knows no limits. Satan does not tolerate dissent. He’s a jealous demon and wants everything for himself. Pray that you, me, and our fellow Christians will withstand whatever the next aspect of the COVID reset he and his minions on earth are planning to roll out in the coming months and years. It’s likely only going to get worse before it gets better.