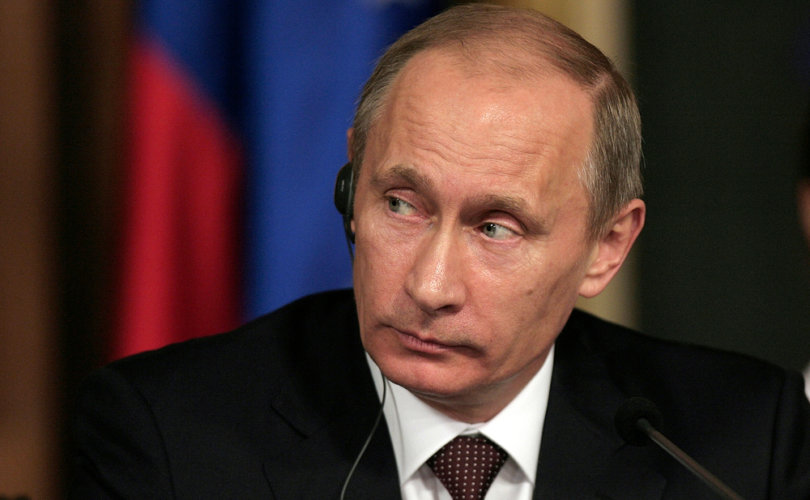 (LifeSiteNews) — Russian President Vladimir Putin continued his war on woke ideology Sunday by signing into law a bill that strengthens his country’s opposition to “LGBT propaganda.”

Western media predictably lashed out at the Orthodox Christian president, who, unlike European and North American politicians, has rejected international pressure to embrace transgenderism and state-sanctioned sodomy.

For defending Biblical marriage and sexuality — as well as for putting Russia first — Putin is vilified by the press as one of the most evil men to have ever lived. The reason why is obvious: He stands in the way of the military industrial complex’s plans for global hegemony.

Don’t get me wrong. I’m not saying Putin’s hands are entirely clean. He’s no saint by any means. But I have friends who would rather have him as their president than Joe Biden. I don’t blame them. After all, he said earlier this year that “the overthrow of faith and traditional values … has taken on the features of … outright Satanism.”

The new Russian bill laudably creates fines and broadens the scope of a 2013 law to now include a prohibition of LGBT content not only for children but Russians of all ages. It also bans the promotion of pedophilia and gender “reassignment” in films, books, media, and advertising. According to Russian outlet RT, the bill passed with unanimous support in both the upper and lower houses of Russia’s Federal Assembly. To that I say: Bravo. U.S. lawmakers should follow suit.

This isn’t the first time Putin has the social justice left up in arms. At the Valdai International Discussion Club in Sochi last year, he denounced those who promote “cancel culture,” equating them to the Bolsheviks who instigated the 1917 communist revolution in Russia. It is “simply monstrous” that “children are taught from an early age that a boy can easily become a girl and vice versa,” he rightly noted at the time.

Putin’s speech was so on target that he earned the praise of The American Conservative’s Rod Dreher, who wrote, “Putin, Orban, and all the illiberal leaders … are all completely clear and completely correct on the society-destroying nature of wokeness and postliberal leftism.”

Under the new law, individuals reportedly risk incurring a penalty of up to 400,000 rubles ($6,600). Corporate entities could be fined up to five million rubles (around $83,000). In 2020, Russian voters outlawed homosexual “marriage.” European Union authorities have routinely condemned Russia’s anti-LGBT laws. Meanwhile, abortion is currently legal in Russia but only until the 12th week of pregnancy. When compared to the rest of the world, these statutes arguably make Russia more Christian than most Western nations.

It’s been said that even a broken clock is right twice a day. I hope Christians who consider Putin an irredeemable villain will at least recognize the good he has done with this and other laws he’s supported that defend Biblical morality against the woke left. Leaders who support such bills are no doubt hard to come by in our post-Christian world. Let’s give credit where credit is due.