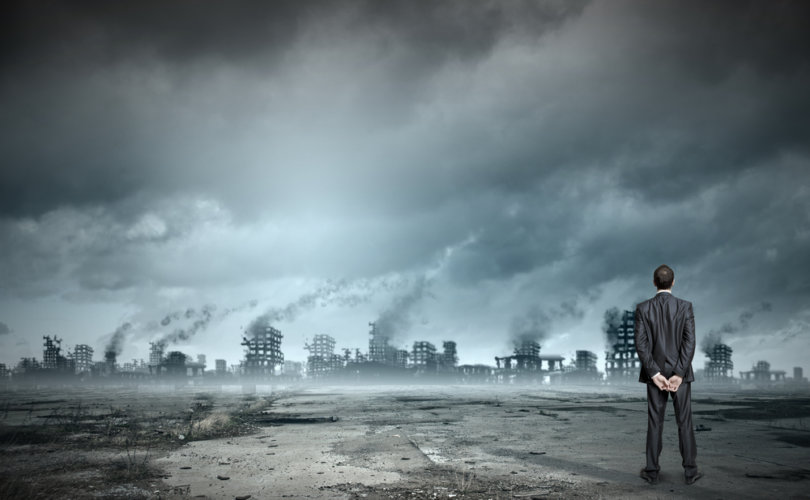 April 11, 2019 (LifeSiteNews) – History is made by free human beings under the gaze of a sovereignly free God, so it does not follow a strict and settled pattern. The dark nights of human history, ages of invasion, warfare, plague, rebellion, can last much longer than any natural winter does, while long days of religious fervor and cultural flourishing can stretch on with preternatural beauty. In all cases, however, sooner or later, night succeeds day, and day succeeds night. We have here no abiding day, even as we have no endless night. Everlasting day is heaven’s property; everlasting night, hell’s.

One of the most dangerous errors is that civilization is automatically bound to increase and spread. The lesson of history is the opposite; civilization is a rarity, attained with difficulty and easily lost. The normal state of humanity is barbarism, just as the normal surface of the planet is salt water. Land looms large in our imagination and civilization in history books, only because sea and savagery are to us less interesting.

Those conversant with modern Church history—in many ways epitomized, as Roberto de Mattei has argued, by the three symbolic dates 1517 (the start of the Protestant Revolt), 1717 (the founding of the first Masonic Lodge), and 1917 (the Bolshevik Revolution)—can see the ever-lengthening, descending gloom making its way, covering the beauty of the Bride of Christ on Earth, as if to smother her at last.

The lights go out, one by one—be it from national apostasy as in Germany or England, from anticlerical revolutions and state-sponsored brutality as in France or Russia, from the choking comforts of a world hypnotized by technology, from wolves who shepherd and sheep who wander into the night. Finally, in the era of Vatican II, the Church entered a winter like none she has ever seen before.

I recently read: “In 1914 the Russian Church had 54,457 churches; the Communist persecution reduced this number to 6,800.” The thought struck me: is not something like this true of the postconciliar disaster, as well? The ill-starred aggiornamento (updating, bringing the Church up to date in the modern world) tore down sanctuaries and now boards up churches everywhere throughout the Western world. The transmission of the Faith has been diluted, contaminated, in many cases simply dropped. Above all, the worship of God has been altered almost past recognition except in those few churches that hold on to tradition. As historian Henry Sire puts it: “In today’s climate, the many signs of irreverence that originated as abuses and were then promptly authorised, are taken for granted; and a generation brought up in ignorance of the Church’s true prayer has been taught to regard Paul VI’s creation as the norm.”

If most Catholics are still in the dark about the devastation that was wrought on liturgy, theology, spirituality, catechesis, everything, during and after the Second Vatican Council, who can blame them? Are they likely to hear about any of this in RCIA or from the pulpit? That is why those who take their faith seriously are understandably bewildered by what is happening in high speed under Pope Francis: they have no mental or spiritual framework within which to make sense out of it. How did we reach a moment when a pope of the Catholic Church would celebrate Luther and invite Lutherans to communion, sing the praises of “fraternity” to the applause of the Freemasons, and cut a deal subjecting the Church to the control of China’s Communist Party? The spirits of 1517, 1717, and 1917 have descended on Vatican Hill and made themselves at home.

Happily, the traditionalist critique of the current pontificate and of the entire trajectory that paved the way for it is becoming much better known. Ever increasing numbers of Catholics are opening their eyes, dropping their faulty assumptions, preparing themselves for the great tribulation and purification ahead of us—indeed, already upon us.

Let us be candid: we are in another Dark Ages, only this time it’s much darker than the first run. And yet people think we are well off because we have technology and comfort. So what? That makes us (in T.S. Eliot’s memorable phrase) “techno-barbarians.” We can cause more harm more quickly—and then follow it on the news, or replay it as a video game.

This kind of unnatural Western way of life, including its ecclesiastical manifestations, cannot survive. It is contrary to all the laws of sound growth; it is stillborn. Where the Catholic Faith survives, it will be not in the realms of Cardinals Tobin, Cupich, or Marx. It will be in the many places, most of them humble and small, where the Faith is still believed and lived in earnest.