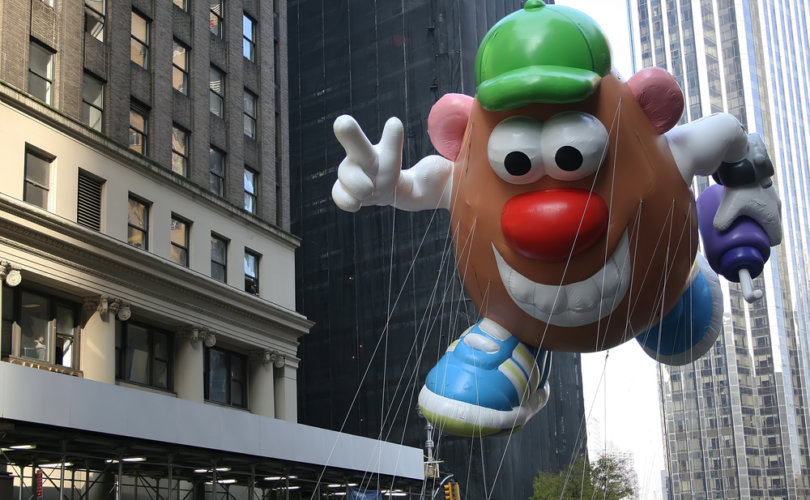 February 26, 2021 (LifeSiteNews) — On the heels of a California bill addressing the ugly injustice inflicted on non-binary children (yes, that’s a thing now) by the presence of boys and girls sections in department stores, Hasbro has announced that it will be removing the gender from the classic toy Mr. Potato Head. Virtue signaling is particularly important for Big Business these days, since we are in the midst of a massive transfer of wealth from citizens to corporations brought about by the COVID-19 pandemic.

But if you’re concerned about the ongoing chaos and collapse, this should brighten your day: Mr. Potato Head is now just “Potato Head,” in order to ensure that “all feel welcome in the Potato Head world.” If this seems like a solution without a problem, you’ll be happy to know that the LGBT lobbyists over at GLAAD were thrilled. “Hasbro is helping kids to simply see toys as toys, which encourages them to be their authentic selves outside of the traditional gender norms,” announced GLAAD’s chief comms officer, Rich Ferraro. Ferraro failed to notice that whatever this is, allowing toys to be “simply toys” it certainly isn’t.

Hasbro must be thrilled by how much traction their move got from the LGBT crowd considering how little effort they put into it. They’re not even changing their Mr. and Mrs. Potato Head characters; they’re just dropping the “Mr.” from the branding on the package. In fact, the company tweeted that not much was changing at all: “While it was announced today that the POTATO HEAD brand name & logo are dropping the ‘MR.’ I yam proud to confirm that MR. & MRS. POTATO HEAD aren’t going anywhere and will remain MR. & MRS. POTATO HEAD.”

Ali Mierzejewski, editor-in-chief at The Toy Insider, strained to find some significance beyond the general stupidity of everything. “It’s a potato,” he told the Associated Press, in case we hadn’t noticed. “But kids like to see themselves in the toys they are playing with.” It is, you understand, very important that children see themselves as a Potato Head rather than a Mr. or Mrs. Potato Head. More importantly, it is essential that Hasbro get seen by groups like GLAAD as being on the Right Side of History.

It all makes sense if you think about it. After all, groups like GLAAD think that kids, like the Potato Heads, have interchangeable parts that can be removed at will and identities that can be changed at a will. And kids like to see themselves in their toys.