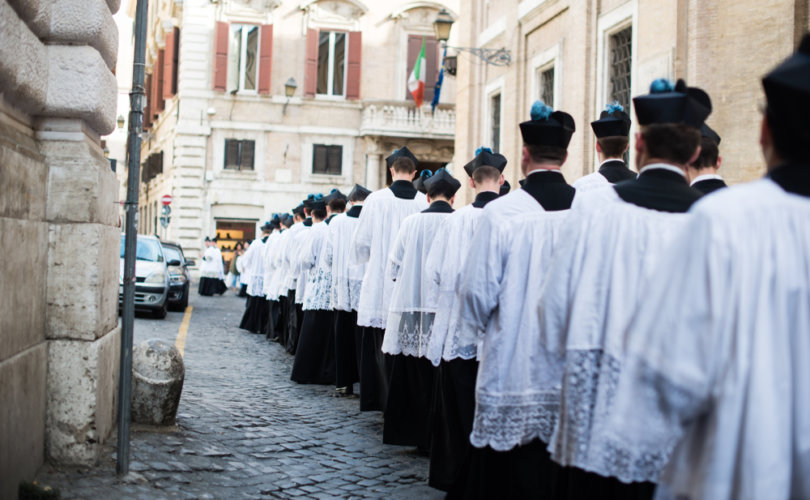 November 23, 2018 (LifeSiteNews) – An opposition seems to have developed between explaining the abuse crisis in the Church in terms of clericalism and in terms of sexual sin and temptation, usually of a homosexual nature. It would be useful to ask what the term ‘clericalism’ actually means.

Pope Francis, in particular, has made much use of this term, but characteristically has not given it a precise definition. Kathleen Hattrup on Aleteia gives several extended quotations from the Holy Father to illustrate the way he uses the term, and she defines it as ‘a false or sycophantic respect and esteem for clergy’, either as demanded by the clergy, or as offered by the laity.

One way of filling out what clericalism is, which follows some hints in Pope Francis’ use of the term, is in terms of a stress on a distinct clerical status. In accordance with the Church’s law and tradition, for example, clerics characteristically wear distinct clothes and have particular titles. In the liturgy, they are separated from the laity to perform a distinct symbolic and ritual function. They have a distinct way of life as a result of celibacy, and are called to a special regime of prayer and mortification. Such things, which mark out the clergy as a group, give them a degree of brotherly solidarity, and underpin the inner, spiritual foundations for their public work, are sometimes criticized by liberal Catholics as separating priests from the laity, making them into a caste set apart from others, and implying their superiority.

This allows them to criticize conservative priests who make the effort to wear clerical dress, be faithful to the Office, and behave in a way which does not lead them into occasions of sin or give scandal to the faithful.

It is also sometimes claimed that clerical solidarity—an ‘us and them’ attitude—contributes to the dismissal of lay complaints against the clergy. There may be some truth in this, but the reality of the abuse of seminarians and younger priests by senior priests and bishops shows that clerical fellow-feeling is not the heart of the problem.

Highlighting the distinctness of the clerical state is not, in any case, the same as asserting its superiority, and even an assertion of superiority (in certain respects) does not imply the demand for exaggerated or wrongful deference. Distinct garb and forms of address pick out social outcasts in some societies: let us hope that never applies to priests in the Catholic community. If there is a correct level of respect for the clergy, and if the clergy have a distinct role to play, then they must be identifiable, and have the spiritual resources to fulfil that role.

Indeed, the erasing of the distinction between clergy and laity does not remove the danger of the abuse of power. Priests who see themselves, or are seen by the laity, primarily as managers, and perhaps as more-or-less interchangeable with their lay assistants, rather than as men consecrated to a special sacramental role, can very easily abuse the power which their managerial status gives them.

Even more dangerous is the substitution of personal charisma for formal clerical prerogatives, as the basis of a priest’s role in the community. It is clear enough where the role of the ordained priesthood begins and ends, what he has authority over and what he does not, what obligations he has and to whom he is responsible. A charismatic leader is not bound by any of this, and the devotion of his followers very easily opens up opportunities for abuse of all kinds.

To give a proper definition of clericalism, we must appeal to what the role of the clergy actually is. Once we have an idea of what priests ought to be doing, then we can say what they ought not to be doing. The term ‘clericalism’ implies that they are overstepping the mark, specifically, in relation to the rights and duties of the laity.

The dignity of the baptized laity, and their role in spreading the Gospel, include the role of parents as the primary educators of their children (see Vatican II’s Gravissimum Educationis 3), and their primary role in evangelizing the temporal sphere: the world of home, work, and politics (see Vatican II’s Apostolicam actuositatem 7). If the primacy of the laity in these areas and other were truly respected by bishops and priests, then clericalism would indeed be defeated.