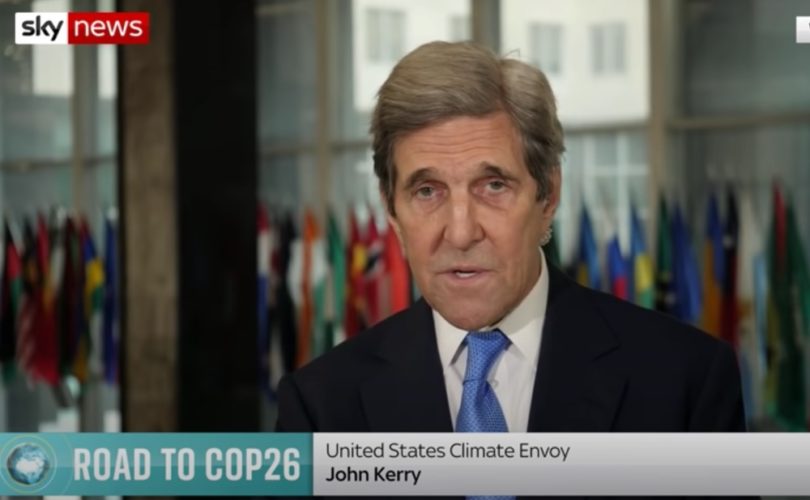 April 19, 2021 (LifeSiteNews) – After fossil-fueling his way back and forth to Shanghai – expelling a few dozen tons of carbon dioxide into the upper atmosphere in the process – Climate Czar John Kerry announced that he had reached an agreement with the Chinese Communist Party (CCP).

Their joint statement about the “climate crisis” begins with:

The United States and China are committed to cooperating with each other and with other countries to tackle the climate crisis, which must be addressed with the seriousness and urgency that it demands.This includes both enhancing their respective actions and cooperating in multilateral processes, including the United Nations Framework Convention on Climate Change and the Paris Agreement. Both countries recall their historic contribution to the development, adoption, signature, and entry into force of the Paris Agreement through their leadership and collaboration. (italics added)

You might ask why we are signing any kind of agreement with the CCP, given how it is crushing freedom in Hong Kong, committing genocide against the Uyghurs in Eastern Turkestan, and constantly threatening to invade Taiwan. After all, Beijing promised to respect Hong Kong’s autonomy for 50 years when the U.K. handed over control of the city-state in 1997, only to tear up the agreement 20 years later and imprison those Hong Kongers who resist.

When that very question was put to Kerry during a Sunday morning interview in Seoul, Korea, he explained, “climate is a life-or-death issue in so many different parts of the world.” He added, “What we need to do is prove we can actually get together [with the Chinese Communist Party], sit down and work on some things constructively.”

The Uyghurs and other minorities in China, not to mention Catholics, non-Catholic Christians, and Buddhists in that country—all of whom are being persecuted at the present time – have real “life-or-death” issues, of course, even though Kerry chose not to address them. After all, the CCP poses a much more immediate threat to their lives than a slight rise in global temperatures over the next century.

Although he avoided criticizing China, Kerry did not hesitate to criticize his own country, saying, “We’ve seen commitments before where everybody falls short. I mean, frankly, we’re all falling short. The entire world right now is falling short. This is not a finger-pointing exercise of one nation alone.”

Apparently no Biden official can open his mouth without apologizing for the country they are supposed to be serving, as everyone from Vice President Kamala Harris to U.N. Ambassador Thomas-Greenfield have recently demonstrated by attacking America for “white supremacy.”

One problem with the Climate Czar’s willingness to blame America first is that, thanks to the expansion of fracking under the Trump administration, and the increased use of natural gas, our CO2 emissions actually fell under Trump.

That didn’t stop Kerry from engaging in the other favorite pastime of Biden and his officials, namely, bashing Trump. In an interview with Sky News’s “Sophy Ridge on Sunday,” Kerry said he was “very sorry for the last four years when the president didn't care about science.”

Although he was careful not to single out China, that country is by far the most egregious polluter on the planet. And I’m not talking here just about CO2 (which is not a pollutant at all, properly speaking), but about such things as sulfur dioxide, which comes from burning dirty coal.

If the Biden administration thinks it can convince hard-nosed Chinese officials to forgo cheap, abundant carbon dioxide-emitting energy for more expensive intermittent sources, it is indulging in a fantasy. China will not shutter its coal-fired plants, but will continue to build new ones while extending the life of existing ones. Beijing knows that rapid economic development depends upon having the affordable, reliable energy that they provide.

What is much more likely is that Biden will buckle to Chinese demands.

The CCP is demanding that the U.S. President announce deep cuts in emissions. This would raise the cost of energy for American consumers, lower our standard of living, and make our goods less competitive overseas.

Another one of Beijing’s demands is that America fork over billions to developing countries to obtain “clean” technology and adapt to “climate change.” Given that China is the dominant global supplier of wind turbines and solar panels, a lot of this money would wind up being passed through to China.

This would be a win-win for China, weakening the U.S. industrial base while strengthening China’s.

It would be a real-world example of the ancient Chinese strategy for defeating an enemy called “Taking the firewood out from under the pot.”

It means to deprive your enemy of some vital resource, in this case, energy.

In a few days President Joe Biden is set to have a virtual conference on climate change. Let’s hope he does not further cripple the U.S. economy, already laboring under the aftereffects of the pandemic, by agreeing to the Chinese demands.

The Paris Climate Accords, from which President Trump withdrew but Biden has now rejoined, are based on the premise that human beings can control the future climate of planet earth.

There is a very specific goal in the Paris agreement, namely, that humanity can and should “hold the global average temperature increase to well below 2 degrees C and to pursue efforts to limit it to 1.5 degrees C.”

There is a real question as to whether this is even possible, regardless of how much CO2 is released – on not released – into the atmosphere. The reason is that the earth’s climate depends overwhelmingly on solar activity, not man’s activity.

In other words, if the Biden administration imposes a radical “green energy” plan on America, we may be destroying our industrial base – built on abundant, widely available energy – for nothing.

We will be making one of the biggest strategic blunders in history, namely, removing our own “firewood” from under our own “pot.”