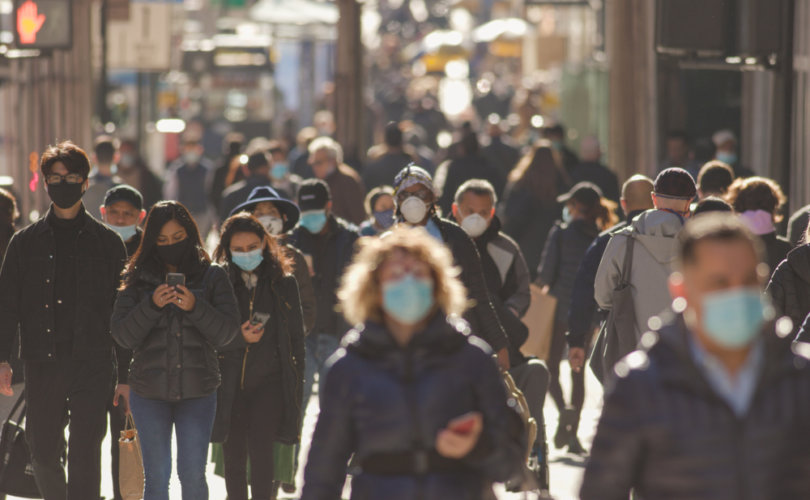 See Editor’s Note at the end of this blog with comments from Dr. Robert Malone supportive of  Dr. Desmet’s concepts.

(LifeSiteNews) — Since the early days of the COVID-19 pandemic, while a majority of people have gone along with the various health directives and “followed the science,” a growing minority of people — largely conservatives and Christians — have pushed back against the prevailing narrative.

Dissidents of the global lockstep wisdom of mandates, economic shutdowns, and government control began even in the early days of the so-called “public health crisis” to describe the ritualistic hand washing, “social-distancing,” and mask-wearing behaviors as highly symbolic cult-like practices, suggesting that “The Science” had, in the era of COVID-19, become the new worldwide theology, with vaccination the final ritual of initiation: a kind of baptism into the public health religion.

Now, nearly two years after “two weeks to slow the spread,” those whose intuition told them something was seriously amiss with the mainstream perspective have received the cold comfort of vindication.

Discriminatory lockdowns, “show me your papers” policies, mandatory quarantines for healthy people, and incomprehensible police brutality against anti-lockdown protesters who merely want their lives back have demonstrated that those who worried more about the creeping rise of a totalitarian health dictatorship were far more correct than those who panicked about what was supposed to be the worst pandemic since the Spanish flu.

Meanwhile, independent-thinking professors, researchers, and other academics worldwide have pointed out that COVID-19 is not nearly as lethal as initially modeled, while lockdowns, masks, and vaccines have failed to stop transmission of the virus and caused serious harm in themselves.

So why, in the face of serious human rights abuses and the obvious inefficacy of the heavy-handed measures enacted to eradicate a relatively mild endemic virus, have so many people failed to recognize what has happened?

Why, after locking down, masking up, social distancing, and getting their booster jabs, are a seeming majority of people willing to do it all over again out of apparent terror of the latest new variant, which by all metrics appears to be nothing whatsoever to be concerned about?

Why, in the face of historical atrocities like the Holocaust and the horrific genocides committed by the Soviet Union, does our luxurious modern society appear to be marching toward the demonization and ostracization (or worse) of those opposed to the dominant regime?

Dr. Mattias Desmet, professor of clinical psychology at Ghent University in Belgium, has a word for it.

He says it’s an example of the psychological concept of “mass formation,” a kind of broad scale hypnosis that causes large groups of people to band together to fight a common enemy with complete lack of concern for the loss of individual rights, privileges, and even well-being.

According to Desmet, historical analysis shows that such “mass formation” can be the first step toward totalitarianism and the commission of atrocity in the name of collective welfare.

In a September podcast interview with Dan Astin-Gregory, Dr. Desmet, who said he was skeptical of the mainstream narrative from the beginning of the pandemic, said he first analyzed the information from a statistical perspective and found the numbers simply didn’t add up: The true pandemic numbers were far less alarming than those projected by Imperial College London’s initial model that propelled the U.S. and U.K. into lockdown in early 2020.

But soon Desmet said his focus shifted from the statistical to the psychological, as he began to observe behaviors emerge in relationship to the virus and the prevailing narrative surrounding it which he described as a form of widespread hypnosis.

Specifically, Desmet described a process of so-called “mass formation,” a kind of hypnotic state in which people around the world were able to offload their loneliness, their frustrations, their “free-floating anxiety,” and their dissatisfaction with jobs and lifestyles they considered meaningless onto the COVID-19 narrative promulgated by the corporate media, government officials, and global elites

Desmet said the COVID narrative has presented millions of disaffected moderns with an identifiable enemy, a battle plan to combat it, camaraderie with fellow soldiers, and something for which to sacrifice even their most fundamental rights and liberties ostensibly for the common good, which he said “leads to a kind of mental intoxication of connectedness, which is the real reason why people continue to buy into the narrative, even if it’s utterly absurd or blatantly wrong.”

Indeed, as the pandemic has worn on and major elements of the narrative crumbled, those who oppose the upending of the traditional order in favor of the public health technocracy have discovered that no amount of catastrophic effects from lockdowns, or studies demonstrating the inefficacy of anti-COVID measures, have put a stop to the endless deployment of lockdowns, mandates, mass media hysteria, and public shaming.

Instead, the professor pointed out that COVID adherents have only become more zealous and have learned to personalize the enemy, shifting their sights onto those who don’t comply with draconian rules that have failed to suppress the virus, and blaming them for the restrictions and mandates they themselves have voluntarily adopted.

Desmet said those caught in the grip of the COVID hypnosis don’t want to be alerted to the fact that the narrative they follow is demonstrably false, because they don’t want to lose the sense of purpose they have derived from it.

Attempting to awaken them from their stupor, he said, instead generates a violent response no doubt familiar to many who have attempted to discuss the matter with friends and relatives.
According to Desmet, people who have signed on to the “new normal” don’t want to be nudged back into an “old normal” in which their lives felt less significant; in which they weren’t a part of a global effort to save the world through the attempted eradication of a single virus. An old normal in which their “free-floating frustrations” can’t be channeled toward a single, heroic aim.

Instead, Desmet argued the answer is not necessarily to attempt to wake up the hypnotized, but instead to guide them toward a different fight that rejects both the old meaninglessness and the new authoritarianism.

If that task is not accomplished, Desmet issued a stark warning: Once a population has bought into a narrative that justifies totalitarian control, the annihilation of foundational rights and freedoms, censorship of dissenting opinions, and the demonization of the class of people who don’t comply, history shows atrocities soon follow, justified under the banner of the common good.

“Masses stand to commit atrocities as if they perform a holy duty,” Desmet said. “That’s very typical. What they actually feel is that by trying to destroy the dissonant voices [they] actually protect the collective … and satisfy a certain need to channel frustration and aggression.”

Desmet said “the real solution,” rather than pursuing the horrific logical outgrowth of demonization and groupthink, “would be to start to think, all together, how we ended up in this terrible state of social isolation, of lack of meaning-making, of free-floating anxiety, and of all this frustration and aggression. That’s the real question we should ask ourselves.”

Desmet emphasized that “mass formation is a kind of hypnosis,” and like hypnosis “is a phenomenon that is provoked by the vibration of a voice.”

“You have to take this literally,” he said. “Totalitarian leaders know this very well. They start every new day with 30 minutes of propaganda in which the voice of the leader constantly penetrates the consciousness of the population.”

The professor noted that “without mass media,” purveyors of the mass formation narratives in Germany and the Soviet Union would have been unable to retain their blind following as they evolved into genocidal regimes responsible for the deaths of millions of innocent people.

“What we have to convince each other of, time and time again, is that we all together have to continue to speak out,” Desmet said. “Just to say that you do not agree with the mainstream narrative. That’s the most basic thing.”

Desmet’s admonitions are mirrored by Archbishop Carlo Maria Viganò, former apostolic nuncio to the United States who has warned that “[o]ur enemy is not the virus, but the insanity of those who betray their duties to the detriment of the community.”

Viganò has called upon people around the world to form an alliance under the Cross of Christ the King in opposition to the hypnotic global regime that is leading millions blindly down the path of atrocity, urging people to stand together to prevent the rise of a totalitarian state perhaps more dangerous than any seen before in history.

“If we continue to delay, if we do not understand the threat that looms over us all, if we do not react by organizing ourselves into a firm and courageous resistance, this infernal regime that is establishing itself everywhere will not be able to be stopped,” Viganò said.

As both Desmet and Vigano have warned, if a stable resistance capable of breaking through the perpetual mass hypnosis is not formed, our modern world stands to unnecessarily repeat some of the worst and most horrific chapters of human history.

In a recent LifeSite interview with Dr. Robert Malone, the chief inventor of mRNA technology, he gave the following very supportive comments on Desmet’s analysis:

I personally really like the argument of Mattias Desmet, which is this mass formation psychosis argument, that fundamentally a significant fraction of the population [has] been hypnotized. It’s not [something] that they are conscious of. So the ‘they’re so dug in that they can’t back out argument,’ is founded on the belief that they’re actually aware, that they’re not experiencing cognitive dissonance because they’re aware that they’ve made a mistake.

Right? The mass formations psychosis argument of Mattias Desmet of Ghent argues that they are truly hypnotized, that a large fraction of the population has become hypnotized, much as happened to the German people during the 1930s and 1920s. And it has similar psychological roots in a lot of us, including myself. I’m just one of many who find the arguments of Dr Desmet very compelling. They seem to explain a lot of behaviors that are otherwise inexplicable, like this extreme level of aggression and venom that is vented against anyone who’s expressing anything such as you do at LifeSiteNews. Anything that is contrary to the dominant narrative they attack this in the most personal terms. It is their venomous, aggressive attacks that are not based on any data or information.

I believe that the only recourse now that most of us have, is this idea of building local community. I really believe that we’re now in a situation, and again, I’m very influenced by Mattias Desmet’s analysis. He’s of the opinion, it’s quite dark, that this period of global totalitarianism will sweep over us. It’s now gained enough momentum and enough buy-in from enough nation-states and political organizations, that it has a momentum of its own. And we are going to have to come to terms with that, while we also come to terms with the fact that the virus will have its way with us.