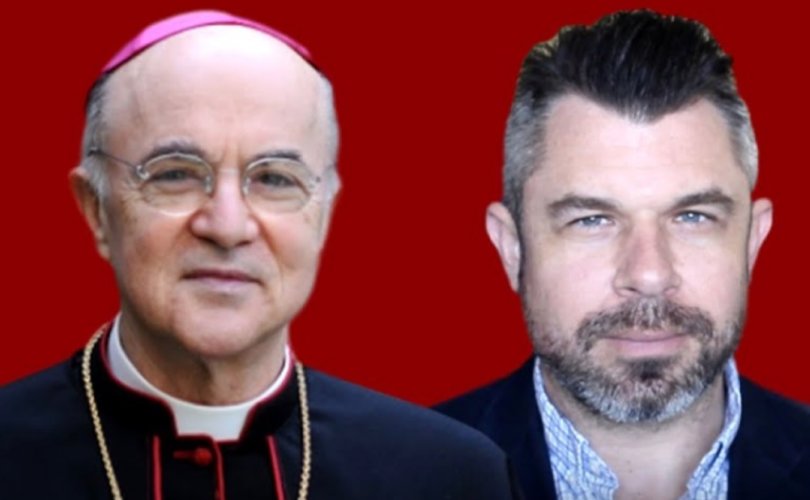 July 10, 2020 (LifeSiteNews) – The Catholic media outlet CNA is giving voice to two Catholics working in senior positions in the White House who criticize their own superior’s endorsement of Archbishop Carlo Maria Viganò and Dr. Taylor Marshall. Both sources are anonymous and claim that President Donald Trump’s endorsement of these two Catholic witnesses is putting “the White House at odds with the U.S. bishops.”

According to the sources quoted by CNA in a post yesterday, it is Dan Scavino – President Trump’s social media manager – who proposed the president endorse Archbishop Viganò and Dr. Marshall, in order to reach the base of the Catholic community while the Catholic U.S bishops at large keep their distance from the president. Even the two anonymous sources told CNA that they regret that the U.S. bishops have not supported the Trump administration much in its efforts to promote life issues and religious liberty.

“Frankly, we’d have liked a little more support from the bishops – not for the president personally or the campaign, but for the work we are doing,” one of the two sources stated.

The anonymous sources also relate how the U.S. bishops’ – and here especially Archbishop Wilton Gregory’s – negative response to Trump’s June 2 visit to the John Paul II Shrine in Washington, D.C. gave Trump’s team the idea to bypass the Catholic hierarchy and to approach directly the Catholic base.

As CNA stated: “A second senior administration official, who attends weekly meetings with the president in the Oval Office, told CNA the president believes he has not been supported by U.S. bishops for his efforts on religious liberty, and that White House strategists have urged him to court Catholic votes through figures like Marshall and Viganò.”

“To [Scavino and Senior Advisor to the President Stephen Miller] the [U.S.] bishops are all shades of Pope Francis, especially on immigration, which drives Miller crazy,” one of the two sources is quoted as saying.

In June, President Trump tweeted a LifeSiteNews report on a supportive open letter to him written by Archbishop Viganò, and then he quoted on Twitter Dr. Marshall’s recent interview with Jack Posobiec, in which the Catholic author had stated that “there is a war against Christianity.”

Dr. Taylor Marshall, author. “There Is A War On Christianity”. @OANN

Scavino himself responded to the CNA article, calling it a “disgraceful hit piece.”

Great journalism here, compliments of @cnalive and their ANONYMOUS sources who claim to be “REAL Catholics” and “SERIOUS Catholics.” Such a pathetic hit piece by the Catholic News Agency, it was worth sharing, because people get it!! https://t.co/cT7DfX1qDu

Archbishop Viganò has gained much prominence ever since he revealed, in August of 2018, that he had told Pope Francis in person about the restrictions that Pope Benedict XVI had placed upon then-Cardinal Theodore McCarrick, due to his record of immoral behavior and sexual abuse. The Italian prelate also did not shy away from naming the names of other prelates in the U.S. and in the Vatican who were involved in covering up the criminal conduct of McCarrick. Thus, he has helped open the eyes of many lay Catholics to see the moral corruption in the midst of the Catholic hierarchy.

Dr. Marshall, a Catholic theologian and podcaster, authored a book last year, called Infiltration: The Plot to Destroy the Church From Within, in which he describes how modernists have infiltrated the very Catholic hierarchy that Archbishop Viganò had called out. He is a promoter of the traditional faith and perennial Church teachings, the traditional Latin Mass, the rosary, and many other aspects of a fuller Catholic witness and life.

But for CNA, these two men are merely “figures with polarizing reputations among Catholics.”

And on Dan Scavino, CNA quotes one of the sources as saying: “For headbangers like Scavino, ‘real Catholics’ are the ones on message with the president, it doesn’t matter how off the reservation they might be in the Church.”

That is to say, CNA allows itself to become the mouthpiece of anonymous sources who claim that both Archbishop Viganò and Dr. Marshall – both of whom try to defend the Catholic Church against moral and doctrinal corruption coming to her from within and from without – as people at the margins, “off the reservation.”

In response to this July 9 article by CNA, Catharine O’Neill, the Executive Director of Catholics for Trump, replied:

Not sure who these “White House Catholics” are that are leaking against @realdonldtrump, but they're wrong.@DanScavino is definitely on the right path. Faithful Catholics love @TaylorRMarshall and @ArchbpVigano !https://t.co/tQeoDLdebA

And Posobiec – the Catholic journalist from One America News Network – asked:

Why is CNA smearing @Scavino45, @TaylorRMarshall, and Archbishop Vigano? https://t.co/jk5AK26uGF

In a similar vein, CNA recently took sides with Bishop Robert Barron, who, after being challenged by Dr. Marshall for claiming only laypeople should defend Catholic statues against those who try to tear them down, had blocked the author on twitter and had called him an “extremist.”

In comments to LifeSite, Dr. Marshall says, “I'm disappointed that CNA did not reach out to me for comment or link my content so that people could see what I actually said.” He adds that “CNA took my words out of context, and used two anonymous sources to build an article that amounts to clickbait.”

He further asks, “how are these CNA journalists in alignment with Catholic moral teaching? Unlike these anonymous sources, Archbishop Viganò and I speak openly and on the record. I encourage people to read and listen to what people actually say on the record. See Proverbs 28:1: ‘Fugit impius nemine persequente; justus autem, quasi leo confidens, absque terrore erit.’”