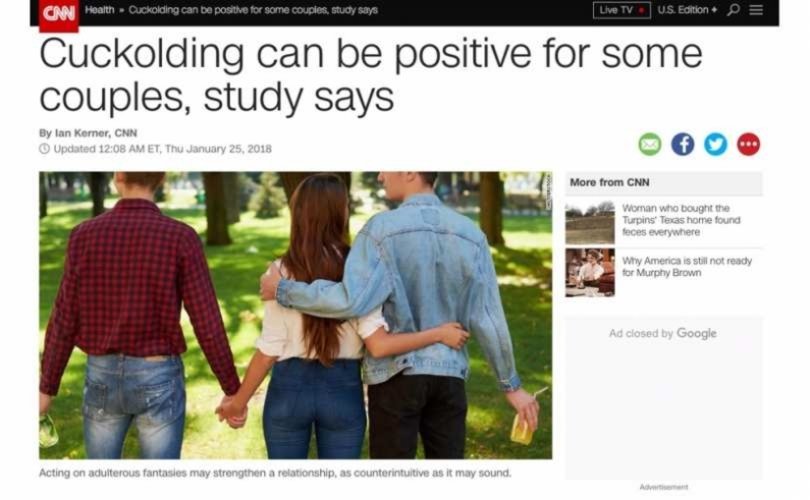 WASHINGTON DC, January 29, 2018 (LifeSiteNews) – CNN, “The most trusted name in news,” misinterpreted a recent study on threesomes among homosexuals to suggest that the practice, also known as “cuckolding,” was normal among male-female couples.

In an article titled Cuckolding can be positive for some couples, study says, CNN author Ian Kerner states that “a recent study by David Ley, Justin Lehmiller and the writer Dan Savage” shows that “acting on cuckolding fantasies can be a largely positive experience for many couples, and hardly a sign of weakness.” Kerner is listed at the end of the article as a “licensed psychotherapist and sexuality counselor in New York City.”

“Indeed, the numbers suggest that cuckolding, or at least thinking about it, is more common than you might imagine,” stated the CNN article.

Cuckolding is the practice of viewing one's partner engaging in sexual activity with a third partner for the purpose of becoming sexually aroused. It is essentially adultery under a different name.

What goes unmentioned until much later in the article, however, is that the study which forms the basis of the CNN report was based on an online survey of 580 gay men who engage in cuckolding behaviors or fantasies.

CNN failed to mention the source material for the study as if it were inconsequential to its reporting while, apparently accepting its questionable methodology.

In so doing, CNN led its reading audience to think that “cuckolding” is a common practice among married male-female couples, and that science affirms the goodness of extramarital affairs and fantasies.

However, the study is not based on married male-female couples: it focused almost exclusively on homosexual couples who practice “consensual non-monogamy.” Titled The Psychology of Gay Men’s Cuckolding Fantasies, the study's survey participants were largely drummed up from pro-homosexual social media sites, including those belonging to homosexual activist Dan Savage.

While this fact was hidden from CNN readers, the author's of the study made the bias clear: “This research is also limited due to the fact that we advertised this as a study of cuckolding fantasies and recruited participants from sources where men with this sexual interest may be over-represented. As such, it is unclear whether the results are generalizable,” states the study in the Archives of Sexual Behavior Journal.

Despite this homosexual bias, CNN went ahead and generalized, extrapolating from research gathered about sexually adventurous non-monogamous homosexual men in order to offer what can only be called poisonous advice to married complementary couples.

What CNN omitted from the gay-cuckolding study

Over two-thirds of the respondents who said they are currently in a “romantic relationship” indicated that their relationship was sexually open (i.e., consensually non-monogamous).”

Here’s what some of the homosexual men told the researchers about their experience of “cuckolding.” While some of these are graphic, the most disturbing examples have been omitted from this report:

My long-term (13-year) partner and I have been occasionally non-monogamous since about 2 years into our relationship, and I have been aroused by picturing the times he has had sex with other men without me present. I’ve fantasized about him calling me and leaving the phone on during his sexual encounters so I could hear it, and I’ve pressed him for details of the encounters so I can imagine them better.

Having my husband flirt with other guys and have sex with them either in front of me, or by taking pictures to send me. I particularly like when he does it without my knowledge and then tells me about it. I like for him to tell me how much better the other partner is and how much more attractive they are.

My cuckolding fantasies (and relationship) revolve around orgasm denial while my boyfriend enjoys multiple sex partners and frequent ejaculation. This establishes his dominance over me. I’m not permitted to sleep with other men. I find in most arousing for him to top other guys, but he’ll occasionally bottom. I love to lick the c*m from a guy’s *ss after my boyfriend has ejaculated there.

I love the idea of my husband coming home with a man’s load in him and telling me all about the guy.

Conservative media criticized the CNN article for using the study to promote “cuckolding” as a normal sexual practice.

“It’s hard to tell what exactly the intent of the article is except to encourage the breakdown of healthy marriages as they have been understood for all of history,” said Tucker Carlson on his Fox News show, Friday Night. “There’s a common theme on the left which hates the traditional family for reasons that are not really clear.”

Carlson went on to say that the left always “pushes the envelope” in the same direction, “toward things that are perverse, disgusting, creepy, weird, unhappy, and against the one thing they hate … [the] average family.  They hate that.”

“Make no mistake, this article is an attempt to normalize as ‘fantasy’ a traditional man's worst nightmare,” said PJ Media’s Tyler O’Neil, noting that the CNN author “nowhere condemns the practice or suggests that men and women should have a healthy respect for their marriage vows — which almost always forbid such ‘fantasies.’”

“CNN's rush to publish, and even to partially endorse, this research seems reckless,” continued O’Neil.  “Marriage isn't just the fundamental institution on which society rests — it is a covenant between two people … to remain faithful for life, and that emphatically includes sexual fidelity.”

“This is just open marriage, recycled from the seventies with a gay twist,” said Ruth Institute founder Jennifer Roback Morse.

“It didn’t work then. It won’t work now. I knew people who tried it. I don’t know a single person for whom it worked.  Divorces, abortion, out of wedlock baby, even one suicide,” she added.