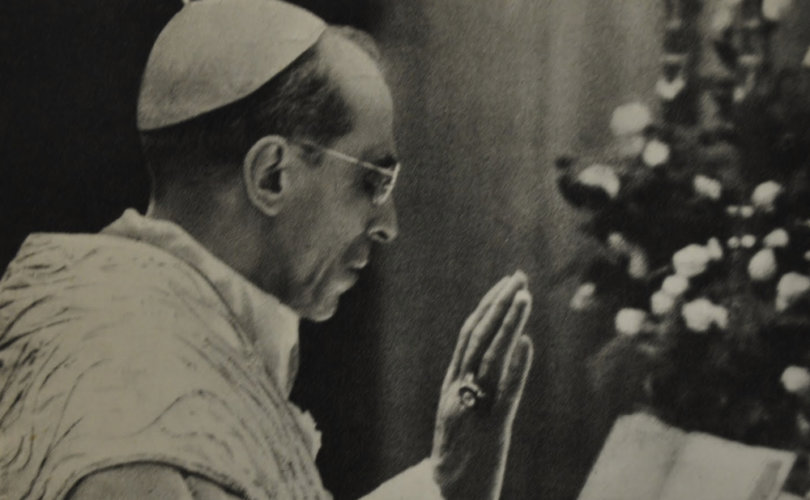 (LifeSiteNews) – In 1948, Pope Pius XII established the Commission for Liturgical Reform with Annibale Bugnini as its Secretary. This commission would research and propose liturgical reforms that culminated in an experimental Easter Vigil in 1951 and a thoroughly revamped Holy Week in 1955, and paved the way for the Novus Ordo Mass of 1969.

Historically speaking, both 1947 and 1954 stick out as significant dates, which may be worth taking into account as we try to unravel how the liturgical debacle took place. The information that follows was relayed to me by a writer who has made twentieth-century political conspiracy one of his main topics of research.

1947 was the year that Operation Gladio was started by the CIA to stop the spread of Communism in western Europe. Those who wish to read more about the operation will find a good introductory article here, but the summary is that the CIA generated funding for Gladio through conspiring with mafia groups operating in the international drug trade and, in order to launder the drug money, employed the Vatican Bank due to Article 2 of the Lateran Treaty of 1929, which permitted the privacy they needed.

These anti-Communist actions resulted in the funding of various terrorist cells to prevent Communist and anti-American parties from gaining electoral office in Post-War Europe, as well as some high-level assassinations. Gladio, in essence, is the European version of Operation Condor of South America and reminds one of how the CIA trained the Taliban in the 1980s during the Soviet invasion of Afghanistan. 1948 saw the first election in which Gladio would interfere, when the Italian electorate were close to electing a Communist party to office.

Already in 1945, Pope Pius XII had met with William Donovan (former head of the OSS, precursor to the CIA, and chairman at the time of the American Committee on United Europe) about preventing the spread of Communism in Europe. Donovan was reportedly rewarded the Grand Cross of the Order of Sylvester due to his role as an anti-Communist crusader.

Further, Pius XII is alleged to have worked with Alan Dulles, the first CIA Director (as well as a 33rd-degree Freemason and Council of Foreign Relations member) around the same time as part of Operation Paperclip, where over 1,600 German scientists were smuggled out of Post-War Germany to help in the development of US scientific endeavors, including defense and space capabilities related to rocket propulsion technology.

I mention Dulles too because he was influential in reviving the Italian Masonic Lodge Propaganda Due (P2), which Mussolini banned during the 1920s and which would play an important role in Operation Gladio and seems likely to have played a role in shaping Vatican II as well. (It must never be forgotten that much of Vatican II’s agenda and strategy was determined by behind-the-scenes geopolitical negotiations; we know, for example, about the lengths to which the pursuit of Ostpolitik drove the Vatican.)

With regards to the ramming-through of major liturgical change in 1955, it is vital to note that Pius XII suffered from a lengthy and debilitating illness starting in 1954, which prevented him from being as effective in office as he was prior to this illness (indeed, he even considered abdicating). The illness divides his pontificate: after it, His Holiness became more reclusive and reportedly went under a personality change. It is indeed difficult to believe that the pope who promulgated Mediator Dei in 1947 would have agreed to the drastic changes to the liturgy of 1955 had he not been compromised in his mental faculties or moral strength.

Considering all of this, as well as what would later follow, is it possible that Pope Pius XII, in a sincere attempt to defend the Church against Communism, accidentally gave the Freemasons the leverage that they would need to (in effect) blackmail the Church and to make long-desired changes during Vatican II and beyond—especially by means of the liturgical reform run by Bugnini, a likely Freemason himself?

This would not be the first time that a good Pope made a bad political decision that deeply affected the Church. For example, Pope Leo XIII’s support of the French Republic bitterly divided French Catholics (historian Roberto de Mattei calls it “a grave error in pastoral strategy”), while Pope Pius XI brokered a deal with the Mexican government that led to the defeat of La Cristiada or the Cristeros rebellion and occasioned the killing of Catholics. Pius XI’s condemnation of Action Française was also a watershed moment in the rehabilitation of liberal Catholicism and the estrangement between the political right and the Church. Further, as Paul L. Williams argues in his book Operation Gladio: The Unholy Alliance between the Vatican, the CIA, and the Mafia, the death of Pope John Paul I and the attempted assassination of Pope John Paul II may well be connected to Gladio.

Certainly, if Gladio shaped the Catholic Church, it would explain why David Rockefeller would think he could ask Pope Paul VI to write an encyclical to promote Catholic contraception (which thankfully Humanae Vitae refuted), why Pope Paul VI would give the Papal Tiara to the United States, why Pope John Paul II changed his outlook on US foreign policy, and why there are still so many questions surrounding the Vatican Bank scandal and the retirement of Pope Benedict XVI.

Moreover, the financial and moral corruption of the court of Bergoglio has reached a new high comparable to that of the worst Renaissance popes, except without the cultural compensation of their artistic taste and patronage. In regard to the current papacy, we can safely say there is far more we do not (yet) know than anything that has come to light so far.

It seems at least plausible that the Holy See’s twentieth-century misjudgment of international relations, with the dangerous bed-partners to which it led, has more than a little to do with the ambiguities and silences in Vatican II and with the shape of the liturgical reform before and after that council.