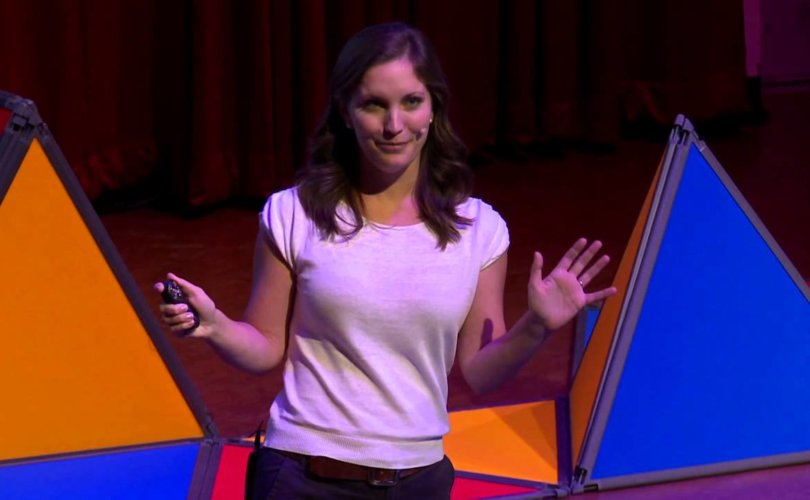 November 23, 2017 (LifeSiteNews) – Proving once again that Teen Vogue is not fit reading material for you or your daughters, columnist Emily Lindin has tweeted her contempt for men falsely accused of sexual assault or harassment.

“Here’s an unpopular opinion,” she wrote. “I’m actually not at all concerned about innocent men losing their jobs over false sexual assault/harassment allegations.”

Lindin next tweeted her belief that “false allegations VERY rarely happen, so even bringing it up borders on a derailment tactic” in discussing what she sees as the “worldwide, systemic oppression of half the population.”

Let that be a comfort to the innocent chap who has just lost his job–or chaps, as Lindin anticipates that there may be more than one:

“If some innocent men’s reputations have to take a hit in the process of undoing the patriarchy, that is a price I am willing to pay,” she tweeted.

It wouldn’t be you paying the price, I might have tweeted back, but Jake Tapper of CNN tweeted it first.

I read the thread. You said “if some innocent men's reputations have to take a hit in the process of undoing the patriarchy, that is a price I am absolutely willing to pay.” That’s immoral. And it’s not a price *you* would be paying, btw. It would be innocent men doing that.

I myself am concerned about innocent men losing their jobs over false sexual assault/harassment allegations for four reasons. The first is that I have a strong sense of natural justice and think it a very serious problem if the innocent are punished. The second is that I have a husband and two brothers in work, and they would be devastated if a colleague made false accusations against them. The third is that I am unconvinced that the world would be a better place if we undid the patriarchy, but I suppose it all depends on what people mean by that highly contestable word. The fourth is that, being moral agents, women are indeed capable of lying, of revenge, and of wickedness in general.

Even very small children have a sense of natural justice. They learn very quickly that there are consequence for their actions, that the naughty are (or should be) punished, and that those who do no wrong should not be punished. They are also told, generally after hitting the sibling who hit them first, that two wrongs don’t make a right. They get that. What is difficult for children to grasp, and often comes as a shock, is that the world is not fair. However, the lesson should be an inspiration to the children to reject the unfairness of the world and work in their own small way for justice. Justice should not involve hurting the innocent in our eagerness to punish the guilty.

Compassion may be easier to learn when a child has siblings, and I wonder if Emily Lindin has a brother. When you have siblings, you have an opportunity to love someone-not-your-parents as much as (or almost as much as) you love yourself from a very early age. I grew up in a rather rough schoolyard, where boy-on-girl sexual harassment abounded, but I knew that boys could be loveable because my brothers were boys. Unfortunately, witnessing boys hurt girls made it more difficult for me think of men-not-my-brothers as potential victims of female aggression. It took a while, but I got there. Maybe Lindin will, too.

My sibs and I grew up in a traditional family in which the father worked at his job and the mother stayed home with the children and controlled the family finances. It seems to me that this system worked very well although it would have worked better if homemakers were not being excoriated publically by feminists as “parasites” at the time. Nevertheless, my mother was living the dream: she had married someone with more education and a higher income than she had. Her considerable contribution to everyone’s comfort and her semi-sacred status as Wife and Mother were universally acknowledged. My father laid down the law that none of us kids were allowed to disrespect our mother, and my mother told us a thousand times how much we owed to our father. If patriarchy–which currently means different things in different places—can mean traditional families like ours, bring it on, I say.

Incidentally, the financial well-being of seven people, five of them children, depended heavily on my father not being deprived of a job. But I suppose all of us having to depend, like too many abandoned wives and single mothers, on the state for our sustenance would have been a price Emily Lindin would have been happy to pay for the overthrowing of our own particular patriarchy.

Finally, I don’t want to ignore the shameful abuse women experience in the workplace or at school. Some men do indeed sexually harass women or other men, and they are probably in greater numbers than the women who sexually harass men. (“He’s six-foot-three, and I wish we had ten of him,” said one of my female managers of one of my male colleagues in his hearing.)  However, I don’t understand how it helps women flourish to pretend that women never tell lies, never engage in the basest of office politics and never feel like revenge for hurt feelings. I’ve seen women in an office gang together to make another woman cry; I can easily imagine the same women concocting a story to get an innocent man fired.