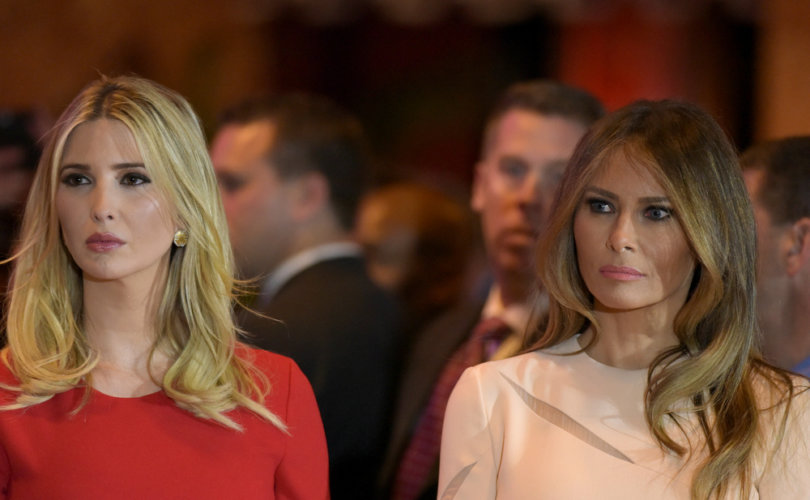 April 3, 2017 (LifeSiteNews) – Canadian media outlets have been on a roll with their publication of irrational feminist columns. First, it was the National Post’s Ashley Csanady claiming that Mike Pence’s marital precautions constituted “rape culture.” Now, Anne Kingston of Maclean’s has published a hysterical article titled “Donald Trump’s first ‘End of Women’s History’ month.” Her thesis is the same tired one every other one radical feminist has published since Trump’s election: Trump is a misogynist, his administration is misogynist, and every woman related to his administration is a secret misogynist.

Kingston’s raw contempt for women who do not choose the path she thinks women should choose is so overt it’s jarring. Melania Trump, for example, is portrayed as a prop and a political tool who is stashed in Trump Tower like a Republican Rapunzel until the Misogynist-in-Chief needs to trot her out, ignoring reports that Melania actually decided to stay longer in New York to ensure that their son Barron’s school year would not be interrupted. It is Kingston who turns out to be contemptuous of women here: Melania Trump is apparently a puppet without agency simply because Kingston appears to find her choices bewildering. As is always the case with progressives, it’s not really about choice—it’s about making what they consider to be the right choice.

It’s long past time that we began to see these mainstream feminist commentators for what they are: Corporate shills doing their best to shame women who make different choices and decline to define themselves by their economic roles.

One line in Kingston’s column really stood out to me: “Trust the Trump administration to exploit Women’s History Month to highlight, reinforce, and even institutionalize a retrograde female-role trifecta: women as daughters, wives, and mothers.” And in one sentence, Kingston reveals that modern feminism, which was once a radical left-wing ideology, has now sold out to run-amok capitalism and corporations.

Let me explain. First of all, it is very indicative that Kingston finds the titles of daughter, wife, or mother to be “retrograde”—obviously, Kingston values the career titles women earn through their economic roles over those that define their infinitely more valuable relationships to other people. The exact same standard would apply to men: My roles as a son, husband, and father are infinitely more important than my roles as a public speaker or as a communications director. Most people would feel the same way, unless they define their value by their economic role and role as a consumer. I don’t think this is even controversial. Does anyone think it’s a good idea to value your economic role more than your wife, your husband, or your children?

Meanwhile, progressive ideology has actually allowed a capitalist system that has divested itself of values to monetize the bodies of women on a scale never before seen in human history. There are real threats to women that need to be addressed, and those threats do not include valuing them as “daughters, mothers, and wives.” Online pornography is consumed by over 80% of men every month. The sexual exploitation industries, as Dr. Mary Anne Layden refers to them—strip clubs, prostitution, and other forms of sexual entertainment—are booming as never before. So is sex trafficking. Girls can sell their eggs (often at the cost of their fertility) to supply women who waited too long to have children in their pursuit of a career, and women can rent out their wombs to gestate other women’s children, sometimes because those women don’t want their bodies impacted by pregnancy.

I remember Peter Hitchens once silencing an entire theater audience during the Festival of Dangerous Ideas in Australia a few years back, when the laughing feminists somberly began to realize that he was right, as he explained that our economies are often designed to force women back to work as soon after birth as possible—and that wage slavery was not freedom. In reality, Hitchens noted, the tacit partnership between so-called feminists and corporations to ensure women leave the home and fill economic roles, regardless of what they want to do, is a “sinister” pact. Hitchens laid this out further in a column in the Daily Mail a couple of years ago:

The view seems to be that it’s just about all right for women to give birth, but after that can we please separate them from their young as soon as possible, for the sake of the economy?…The Lib Dems’ chief feminist, Lynne Featherstone, says with her usual simple-minded bluntness that having a baby is a ‘bit of a setback’, adding that: ‘One of the main barriers to full equality in the UK is the fact women still have babies.’

The Coalition wants 40 per cent of two-year-olds in day care by next year. The shiny Modern Tory Liz Truss (I can’t call her a conservative) hires a costly nanny for her own children but wants the less wealthy to stuff their progeny into baby farms with industrial staff-to-toddler ratios. Even the Leftist Polly Toynbee, who has nothing in principle against nationalising childcare, describes the Truss plan as ‘warehousing’.

Nobody ever questions the claim that it is automatically good for mothers to go out and be wage-slaves. Once, this idea was widely hated, and every self-respecting man worked as hard as he could to free his wife from the workbench.

Then the feminist revolutionaries began to argue that the home was a prison and marriage was penal servitude, chained to a sink. Most people thought that was nuts – until big business realised that women were cheaper than men, more reliable than men and much less likely to go on strike or be hungover than men.

They got tax-breaks. Fatherless households got welfare subsidies. So as far as the State was concerned, the one arrangement that was discriminated against – and hard – was the one where one parent went out to work and the other stayed at home. A selfish upper crust of female lawyers, professional politicians, bankers and journalists imagined that all women enjoyed work as much as they did – when the truth is that most do it to pay the bills.

This “self-satisfied clique,” Peter Hitchens points out, will not stand for these women. Corporate shills like Anne Kingston and her ilk “have done very well out of the sex war,” and can now sneer at those women who prize the positions of “daughter, wife, and mother” over journalist, or lawyer, or businesswoman. Their value is based on their economic output or their paycheck. It all comes down to money.

These so-called feminists view the idea that men would even give their partners the option of staying home with the children with contempt. One female interviewer was reduced to sputtering shock when the late Christopher Hitchens, Peter’s brother, told her, “I don’t think that Mrs. Hitchens should have to work.” “You don’t think women should go and work?” the interviewer demanded. “I’m thrilled if they want to. But they don’t’ have to,” Christopher replied. For the life of her, his interviewer could not wrap her head around that concept. “You’re 61, not 180 [years old],”she protested in bewilderment.

Hitchens shook his head with a smile and reaffirmed. “Mrs. Hitchens doesn’t have to work if she doesn’t want to.” Still confused, the reeling feminist closed the interview, thanking the “charming but sexist Christopher Hitchens,” a man who had the gall to say he would financially support his wife if she chose to stay at home with their daughter, for coming on her show. Hitchens’ statement, “I would expect to take care of them,” it turns out, is not only controversial but sexist.

It’s long past time that we began to see these mainstream feminist commentators for what they are: Corporate shills doing their best to shame women who make different choices and who decline to define themselves by their economic roles. These elite leftists are not interested in ordinary families making tough choices to be able to pay for the needs of their children, they are only interested in demanding that female traitors stop degrading themselves by paying too much attention to those they love and start thinking bigger for a change. After all, there is money to be made.