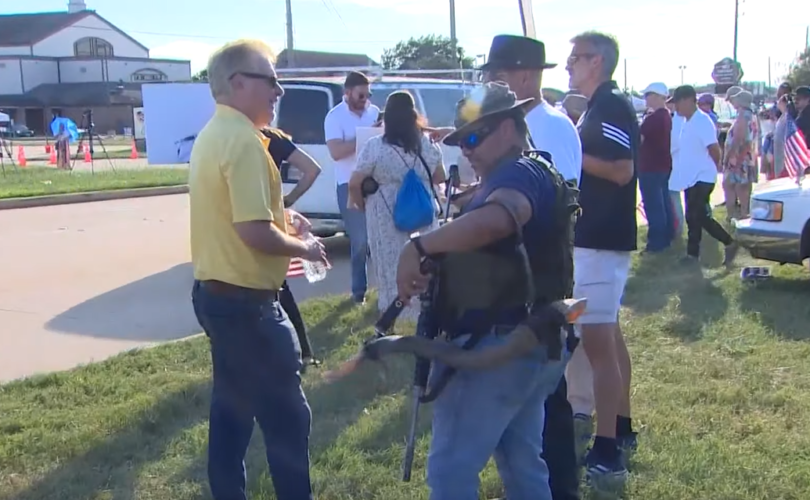 (LifeSiteNews) — The trend of drag queens becoming a bizarre flashpoint in the late-stage sexual revolution culture wars continues — this time, at a church in Texas, of all places.

Last Saturday, Reverend Heather Tolleson of the First Christian Church of Katy, Texas, hosted an “all ages” bingo night with drag queens to show the support of her church for “trans and exploring” children.

Members of the County Citizens Defending Freedom, a handful of parents, Catholics praying the rosary, and members of traditional churches protested the event in response — as, unfortunately, did a few members of the controversial group the Proud Boys. A counter-protest featuring supporters of “all ages” drag events and some masked members of Antifa, an anarchist revolutionary group, formed on the other side of the street.

Unfortunately, both sides of the protest came heavily armed, with police standing between the two to ensure order. There was no violence or arrests, but groups like the Proud Boys and Antifa are notorious for getting into scuffles (and worse), and so the ingredients for a nasty ending were present. As I wrote previously about one of these protests that got slightly out of hand, it is essential that pro-family protests — which are good and necessary — are utterly devoid of violence or the threat of violence.

Tolleson’s “church” is with the ironically-named Disciples of Christ denomination, and her particular franchise has a minister of “LGBT+ Ministries” and leans into its role as a spiritual lapdog for the sexual revolution.

“We create a place for people to feel welcomed and understand that there will always be people who disagree with us,” Tolleson said. It must be noted that nearly every ministry listed on the church’s website references LGBT issues in some way.

Remember here that the drag queen debate has been raging for a couple of years now, and recent events have attracted large protests, especially in Texas. Tolleson was fully aware of this when she decided to host a drag queen fundraiser, and was likely counting on the publicity boosting her profile as an “affirming” clergyperson. Indeed, her church hosts a “Transparent Closet,” a place where “trans and exploring teens, youth and young adults” can find clothes for cross-dressing as well as makeup and other amenities for “passing” as the opposite sex.

Tolleson got her publicity, with many members of the Katy community expressing their outrage that an event featuring drag queens was billed as “all ages.”

Rebecca Clark of Fort Bend’s CCDF told the Epoch Times that “we are done tolerating the exploitation and sexualization of children in this country. Sarah Feigleson of the CCDF concurred: “These events are happening in your back yard. Stand up and raise a respectful ruckus.”

The tensions surrounding these events are likely to rise, especially as drag performers are outed for their shady pasts and sexual proclivities. There’s also this, reported by The Blaze:

Though the event itself was controversial, there was yet another aspect of it that drew further ire from critics. The event was originally supposed to feature drag queen Tisha Flowers, aka Jaysen Kettl. Not only does Kettl now don a macabre persona when dressed as Flowers, but he also has a troubling past. Back in 2004, Kettl, then 17, pled guilty to conspiracy to commit capital murder after administrators at his school learned that he and at least one other student had plotted to commit a mass school shooting. Thankfully, the plot was foiled before anyone could carry it out. However, once Kettl’s criminal history was made known, the church quietly removed him from event promotions. It is unclear whether Kettl attended the event.

After years of apathy, ordinary men and women are getting involved in pushing back against the excesses of the sexual revolution. There is a growing movement; parents confronting and taking over schoolboards; moms and dads demanding change. Let’s not screw it up by affirming Joe Biden’s greatest hope: that somebody, somewhere, will act out in violence and discredit the whole movement.