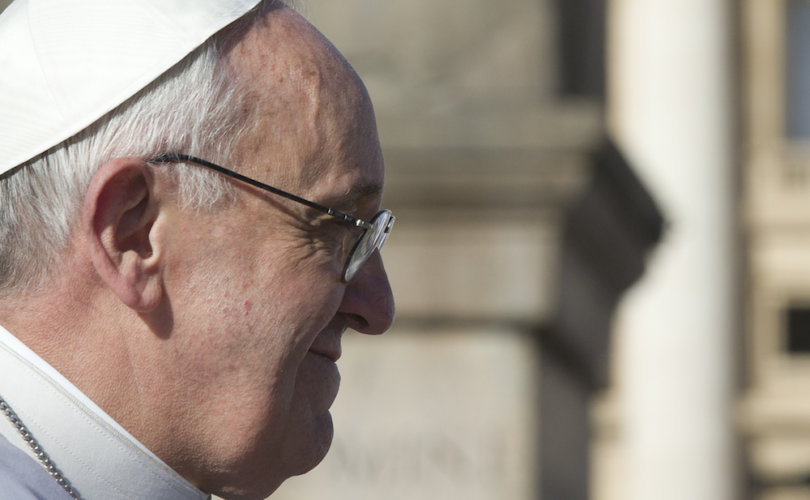 June 3, 2016 (LifeSiteNews) – Two weeks ago the latest controversial interview with Pope Francis hit the press, this time in France with the daily newspaper La Croix. Contrary to the teaching of previous popes, such as Leo XIII in Libertas and Pius XI in Quas Primas, Pope Francis said, “States must be secular. Confessional states end badly. That goes against the grain of History.” In the same interview, Francis suggested a comparison between Christianity and Islamic adherents’ use of conquest to impose their beliefs. “It is true that the idea of conquest is inherent in the soul of Islam,” he said. “However, it is also possible to interpret the objective in Matthew’s Gospel, where Jesus sends his disciples to all nations, in terms of the same idea of conquest.”

The shocking statements reminded me of the very first leaked Q&A with Pope Francis at the beginning of his papacy. It’s an interview remembered most for the pope's admission that there is a “gay lobby” inside the Vatican. Despite the fact that such explosive news would have been huge for LifeSiteNews, you won’t find that first interview covered on LifeSiteNews anywhere near the date of its release. I simply could not believe it to be authentic or accurate – not because of the ‘gay lobby’ comment – but because the Pope had spoken disparagingly about a spiritual bouquet of rosaries he had received upon his election.

Pope Francis was quoted as saying:

It concerns me; when I was elected, I received a letter from one of these groups, and they said: “Your Holiness, we offer you this spiritual treasure: 3,525 rosaries.” Why don't they say, “we pray for you, we ask…”, but this thing of counting… And these groups return to practices and to disciplines that I lived through – not you, because you are not old – to disciplines, to things that in that moment took place, but not now, they do not exist today…

“There is no way,” I remember thinking to myself, “a Pope would ever say anything slighting the rosary.” That aspect of the interview made me question whether any of it was authentic. Thus, I resisted the pressure to publish a story on the Pope’s remarks on the ‘gay lobby’ in the Vatican. A few weeks later I was in Rome and finally got a chance to ask someone in the know about the leaked interview. I was shocked to hear: “of course it was true.” It was, I was told, the first example of a new communications method employed by the Pope using different channels.

That sense, of “there’s no way a pope could ever say such a thing,” has resurfaced time and again over the last few years, and not only from the Holy Father’s off-the-cuff and leaked interviews. Even in official teachings such as his Angelus addresses and homilies at big events, Pope Francis has shocked Catholic sensibilities. Such as the Angelus of June 2, 2013, where he spoke about Christ’s miracle of the multiplication of the loaves and fishes as taking place by “sharing.” “This is the miracle: rather than a multiplication it is a sharing, inspired by faith and prayer,” he said.

He was even more explicit about it in July of last year in a homily preached in Christ the Redeemer Square in Bolivia. Pope Francis said, “This is how the miracle takes place. It is not magic or sorcery. … Jesus managed to generate a current among his followers: they all went on sharing what was their own, turning it into a gift for the others; and that is how they all got to eat their fill. Incredibly, food was left over: they collected it in seven baskets.”

There have been many of these jarring incidents. Here is a list of some of them:

– In July 2013 when a reporter asked why during his trip to Brazil he failed to speak of abortion and homosexuality despite the fact that the nation had just approved laws concerning these matters, the Pope replied: “The Church has already spoken quite clearly on this. It was unnecessary to return to it, just as I didn’t speak about cheating, lying, or other matters on which the Church has a clear teaching!”

– In an October 2013 interview with La Repubblica, Pope Francis was reported to have said: “The most serious of the evils that afflict the world these days are youth unemployment and the loneliness of the old…  the most urgent problem that the Church is facing.” In the same interview he said: “Proselytism is solemn nonsense, it makes no sense.” And also: “I believe in God, not in a Catholic God, there is no Catholic God, there is God and I believe in Jesus Christ, his incarnation.”

– The November 2013 Apostolic Exhortation Evangelii Gaudium was similar to the Repubblica interview in that the Pope focuses on “two great issues” that, he says, “will shape the future of humanity.” “These issues are first, the inclusion of the poor in society, and second, peace and social dialogue,” he wrote.

– In the 2014 book on Pope Francis, The Great Reformer, we learn from papal biographer Austin Ivereigh that Tony Palmer, an Anglican and long time friend of Pope Francis, spoke to then-Cardinal Bergoglio about whether he should become Catholic. Mr. Palmer described the then-Cardinal’s response as: “[Bergoglio] told me that we need to have bridge-builders. He counseled me not to take the step because it looked like I was choosing a side and I would cease to be a bridge-builder.”

– In January of 2015 came the “don’t breed like rabbits” in-flight interview on his return from Manila. Speaking of a woman he knows who was pregnant with her eighth child after having the first seven by C-section, he said he had “rebuked” her, saying, “But do you want to leave seven orphans? That is to tempt God!” “That is an irresponsibility,” he added, “God gives you methods to be responsible.” Pope Francis then said, “Some think that, excuse me if I use that word, that in order to be good Catholics we have to be like rabbits.” He added, “No. Responsible parenthood!”

– In March 2015 came another interview with Repubblica in which the Pope seemed to suggest no person could go to hell, but if they fully rejected God they would be annihilated. The article says: “What happens to that lost soul? Will it be punished? And how? The response of Francis is distinct and clear: there is no punishment, but the annihilation of that soul.  All the others will participate in the beatitude of living in the presence of the Father. The souls that are annihilated will not take part in that banquet; with the death of the body their journey is finished.”

– There was some controversy over Repubblica's Scalfari interview. The Vatican would neither verify nor deny it in its specific parts, but nevertheless published it in the Vatican newspaper, and on the Vatican website. It was later deleted from the website, only to republish it again, then delete it again. Vatican watchers compared the most controversial part regarding the impossibility of people going to hell for all eternity to the statement from the Pope’s latest exhortation Amoris Laetitia, in which he said, “No one can be condemned for ever, because that is not the logic of the Gospel!”

– In a February 2016 interview with one of Italy’s most prominent dailies, Corriere Della Sera, Pope Francis praised Italy’s leading proponent of abortion, Emma Bonino, as one of the nation’s “forgotten greats,” comparing her to great historical figures such as Konrad Adenauer and Robert Schuman. The Pope praised her for her work with refugees from Africa. Bonino was famously arrested for illegal abortions and then became a politician who has led the fight for the legalization of abortion, euthanasia, homosexual “marriage,” legalization of recreational drugs, graphic sex education, and more.

– On February 18, 2016 on the papal plane returning from Mexico, the Pope commented on Donald Trump during the Presidential Primaries.  “A person who only thinks about building walls, wherever they may be, and not building bridges, is not Christian,” he said, according to a transcript of his remarks. In the same press scrum, the Pope said he would not comment on Italy’s same-sex civil union legislation “because the pope is for everybody and he can’t insert himself in the specific internal politics of a country.”

This small sampling gives enough reason why faithful Catholics who love the Church and the Holy Father are concerned. They are so concerned they are overcoming the natural reticence to criticize the actions of the Pope – the Vicar of Christ on earth. With reverence and love, with prayer and prudence—as well as the pain of children questioning their father—they are beginning to speak with greater boldness, sensing that the result of remaining silent about the current trajectory implies acquiescence and even approval, which would only contribute to the spreading ambiguities about the meaning of morality, faith and salvation.