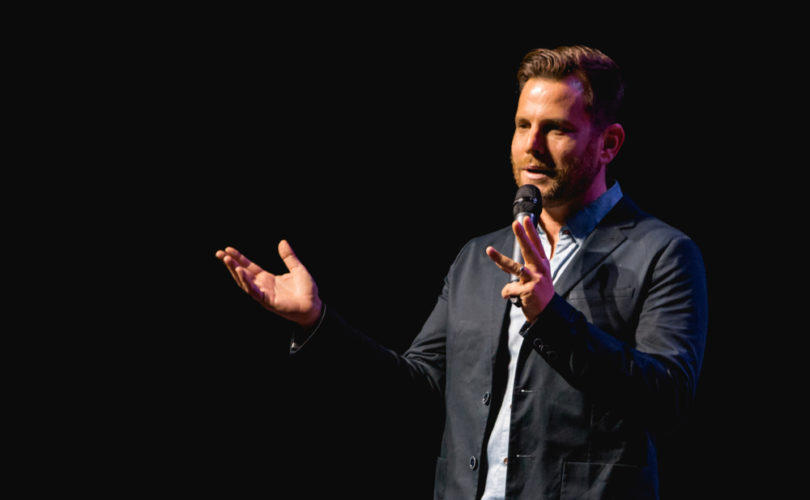 (LifeSiteNews) — On March 16, podcaster Dave Rubin of The Rubin Report tweeted out two photos of himself and his gay partner holding ultrasound photographs and a sign reading: “COMING SOON Baby 1 8/22/22” and “Baby 2, 10/14/22.” Those, presumably, are the projected due dates for when the surrogate mothers Rubin and his partner hired will give birth.

Beneath the tweet, the congratulations rolled in. Glenn Beck’s BlazeTV offered congratulations. So did PragerU, Meghan McCain, and conservative activist Christopher Rufo. Many other purported conservative figures joined in. As a founding member of the so-called Intellectual Dark Web who made a very public journey from Left to Right, Rubin’s news attracted plenty of attention.

As it turns out, there are plenty of conservatives who are entirely supportive of gay men renting the bodies of two women in order to procure children who will be raised without mothers.

In debates surrounding adoption by same-sex couples, the focus is often on whether or not “two moms” or “two dads” can be great parents. That discussion entirely misses the point. A man cannot be a mother and a woman cannot be a father. Motherless children are a tragedy. Fatherless children are also a tragedy. In situations such as those orchestrated by Rubin and his partner, the tragedy is an intentional one.

It did not used to be controversial to say things like: “Children need their mothers.” The children raised by Rubin and his partner will, regardless of how kind and loving they are, grow up desperately craving the maternal attention and affection that all children need. Men cannot provide what mothers provide, no matter how hard they try. Women cannot provide what fathers provide, no matter how hard they try. These are the simple facts of life, and no amount of LGBT propaganda can change that.

In the ongoing war on wokeness, Christians should be careful as to which allies they choose — and how they form those alliances. Dave Rubin is a nice guy — affable, courteous, and a decent (albeit boring) podcaster. But for some reason, he got invited to be one of the speakers at the National Conservatism Conference in Florida earlier this year. How, exactly, does an advocate of the redefinition of marriage engaged in hiring surrogates to carry children that will be raised by two men qualify as any kind of “conservative”?

As Jake Meador of Mere Orthodoxy put it when commenting on Rubin’s announcement and the response by many conservatives: “For a certain type of anti-woke ‘Christian’ conservative, being ‘anti-woke’ matters more than being faithful to church teaching. This is Conservatism, brought to you by Claremont and the Bronze Age Pervert. And loads of professing Christians are apparently 100% fine with it.”

The sheer power of the cultural gravitational pull now exerted by the LGBT movement means that many Christians and conservatives are eager to hurry on and leave the same-sex “marriage” debate behind them. But regardless of the law, it is essential that Christians do not participate in the normalization of what Rubin and his partner are doing. Nobody should celebrate motherless children — especially not Christians. This is not something we should ever support, much less congratulate somebody for.

Two children will be raised without ever knowing a mother’s love. That is heartbreaking.