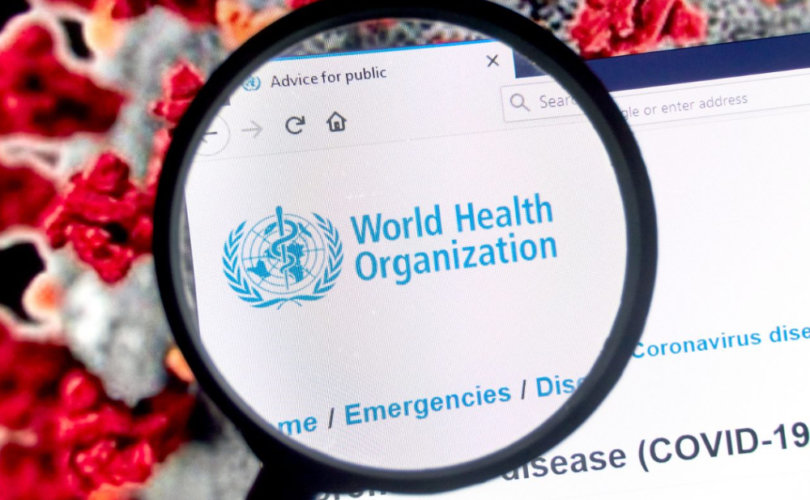 (LifeSiteNews) – By now, there’s a good chance that you will have heard of the WHO’s Global Pandemic Treaty. If you’re confused about exactly what it is and how it will work, that’s understandable. There’s myriad information about this and most of it is written in bureaucratic legalese.

Corbett is a veteran conspiracy analyst and some of his commentary is geared toward those who have been following his work for some time.

He is extremely thorough, and his web page for the video contains all the resources he cited in the video.  That being said, his style is engaging and should be easy to follow for those who aren’t familiar with his work.

Here are his main points of interest from the video:

At the outset of the video, Corbett outlines the impetus for the proposed global treaty explained at a series of public hearings that took place on April 12 and 13 at an event hosted by the WHO.

The lead speaker of the event was none other than Tedros Adhanom, the director-general of the WHO. In his opening remarks, the WHO chief said a lot without saying much. He opined about the state of the world, speaking about the declared COVID pandemic as if it were the worst thing that has ever befallen the human race.

He spoke of “vulnerable people pushed into poverty,” although he curiously didn’t mention the fact that it was governments who did that and not a virus. After sufficiently hammering home his point about the state of the post-COVID dystopia that his organization largely created, he got to the real point — vaccines.

“…[E]ven as some high income countries now roll out first doses of vaccine for their populations, one-third of the world’s population is yet to receive a single dose, including 83% of the population of Africa,” he said.

To “solve” this problem of not having unanimous vaccination of the whole world, Adhanom asked for a “shared response,” with a treaty similar to treaties that exist for “nuclear war … climate change, and many other threats.”

Corbett was not surprised that the WHO head would use a perceived global disaster to push mass vaccination with a jab still going through experimental trials due to his connections.

“Nothing, I think particularly surprising here, but ties to President Clinton and a close collaboration with the Clintons and the Clinton Foundation, and its Clinton HIV AIDS Initiative,” Corbettsaid. “And, of course, a close relationship with the Bill and Melinda Gates Foundation, and he went on to chair the Global Fund to Fight AIDS, Tuberculosis and Malaria that was co-founded by the Gates Foundation. And I think the implication is that Tedros is in the position he’s in because he is so connected specifically to people like the Gates’s and is willing to listen to what his paymasters tell him to do.”

Gates famously remarked that he had no issue promoting universal vaccination because he believed it would lead to a smaller world population.

Outside of mass vaccination, the goals of the proposed treaty are still up for debate, although it is likely that much of what we have seen over the past two years would just be distilled into a more universal framework headed by the WHO.

The next question worth discussing, according to the Corbett Report host, is the application mechanism of a proposed treaty.

Corbett explained that the WHO is not a legally binding governmental body, as it functions more like a globalist consulting firm not dissimilar to the WEF. How the WHO gets countries to codify its efforts into law is interesting.

Nations sign up as “member states” and promise to abide by the directives of the WHO under certain circumstances. However, some nations go a step further and codify into law the WHO’s wishes.

Corbett pointed to a recent timeline that was released by the European Council “for health tyranny.” He published an article on the subject that readers might find especially helpful.

“Earlier this month, the European Council (EC) released a document laying out the Eurocrats own timetable for the implementation of global health tyranny … ”

According to the EC document, the organization has “proposed an international treaty on pandemics rooted in the Constitution” that would be ratified by legally binding agreements by member states.

The Constitution referred to is from the WHO. “Not that pesky constitution of your nation State government,” Corbett quipped.  “No, no, no. The WHO. Constitution. Which, of course, will override that in a legally binding agreement.”

In essence, Corbett believes that if nations apply legally binding precepts in their own countries, the WHO would be able to more or less dictate public health policy with the force of law.

He likened the pursuit of a global health-security state to the actions that nations have taken under the auspices of the War on Terror since 9/11.

The current timeline, according to the WHO, suggests that the proposed treaty could be ratified by 2024 but is still in the initial stages. Although it isn’t clear what the final treaty would look like, Corbett believes that the process is just for show, and that the final result is a foregone conclusion.

Now that the ball is rolling regarding the proposed treaty, Corbett – a master in propaganda – shared his thoughts on a publication from the London School of Economics (LSE) that is a major global player in finances and governance.

The article, A new pandemic treaty: what the World Health Organization needs to do next, was published March 30 and reads as a cheerleading mechanism for a wide-ranging implementation of the WHO’s goals.

“The justification for a pandemic treaty is that whilst the technical expertise on how to govern and end a pandemic exists, the political will to do so is missing,” the article reads.

The LSE article also stated, “While a framework convention may seem appealing from a ‘get it done’ perspective, its inability to create a harmonious international legal regime could leave significant gaps.”

Corbett opined about what this meant: “So here it’s just like, can we get a 100% truly global system that is truly convened and run from World Health Organization headquarters? Or will these pesky nation states retain some of their sovereignty over public health matters? Again, just what flavor and how much of globalism do you want is essentially the limits of the debate here.”

He then went over the “long list of thematic wishes” from the LSE piece, which include:

These wishes are ill defined and leave much room for interpretation, but Corbett believes that is the point. “But it’s the kind of stuff you might expect, anchoring the treaty in human rights and addressing the principles of the right to health equity, solidarity, transparency, trust and accountability. I like good things to sign me up for that. So again, it could be again, just vague language that means anything you want it to be.”

Particularly striking for Corbett was the notion there could be a “right to health” as if it were a human right to be healthy.

“The right to health is an interesting formulation because, of course, depending again, how you actually detail out that very vague statement, it could mean something along the lines of you have not just the right but the obligation to be healthy because you can infect other people’s right to be healthy if you’re a spreader, if you are an asymptomatic spreader of the new cooties that we tell you exists because of our PCR test, then it is the right of other people to forcibly inject you with whatever concoction they say will stop you or slightly slow down transmission of this new cooties or whatever the case may be.”

The ultimate goal is total control

He believes that ultimately the end game would be a global vaccine passport system for travel, although he is not convinced it will happen.

“Who knows what form this will take and whether they’ll achieve it. But you better believe that’s going to be something that will be pushed at these negotiations, along with pathogen and genomic data sharing.”

Near the end of the LSE piece is read a call for the WHO “to be empowered – financially and politically,” which Corbett believes is consistent with the “propaganda” surrounding the treaty talks.

During the final moments of the Corbett Report episode, Corbett read from an article critical of the pandemic treaty published by Off Guardian, citing a section that he believed summed up the whole affair:

“Yes, the proposed treaty could allow the DG of the WHO to declare a state of global emergency to prevent a potential pandemic, not in response to one. A kind of pandemic pre-crime. If you combine this with the proposed “financial aid” for developing nations reporting “potential health emergencies,” you can see what they’re building – essentially bribing third world governments to give the WHO a pretext for declaring a state of emergency. We already know the other key points likely to be included in a pandemic treaty. They will almost certainly try to introduce international vaccine passports, and pour funding into big Pharma’s pockets to produce “vaccines” ever faster and with even less safety testing. But all of that could pale in comparison to the legal powers potentially being handed to the director-general of the WHO (or whatever new “independent” body they may decide to create) to punish, rebuke or reward national governments. A “Pandemic Treaty” that overrides or overrules national or local governments would hand supranational powers to an unelected bureaucrat or “expert,” who could exercise them entirely at his own discretion and on completely subjective criteria. This is the very definition of technocratic globalism.”