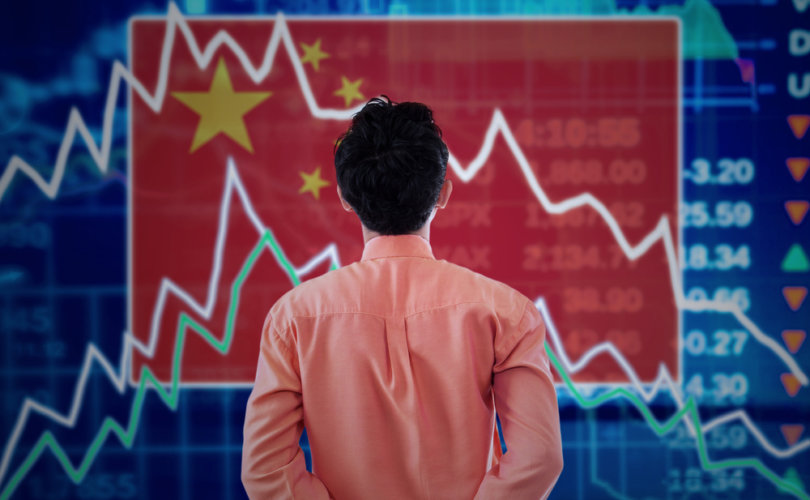 February 28, 2020 (LifeSiteNews) – Appearing on Fox Business last week, I was about as welcome as a ghost at a feast.  “China Inc is shut down for at least another month,” I said to audible groans from the host. “And if the epidemic spreads north to Beijing, west to Shanghai, south to Guangzhou-Shenzhen, or east to Chongqing, you can add another month or two to that.”

“There is virtually no economic activity taking place in much of China,” I explained. “Most factories are shut down, and the only things that many Chinese are consuming are food and whatever medical supplies they can get their hands on.”

Much of the world has yet to take notice of the fact that the second largest economy in the world has checked out.  The Communist Party, whose survival depends upon delivering robust economic growth year after year, is of course still projecting that the economy will grow “around 6 percent” in 2020.

But foreign analysts are growing less sanguine by the day. HSBC, for example, lowered its estimate for first-quarter growth from an annualized rate of 5.8 percent to 4.1 percent, although for the full year it still projected 5.3 percent growth.

Despite the efforts of the authorities to force factories and stores to reopen, the reality on the ground is that, aside from the state-owned sector of the economy, most factories, shops, and services remain shuttered.  Pictures show that Wuhan and other quarantined cities resemble ghost towns, their streets eerily empty of people, who have been ordered to stay inside their apartments until March 10, by which time the plague will hopefully have passed.

But the malaise extends well beyond the quarantined areas to virtually all of China.  How do we know that economic activity everywhere has ground to a halt?  Certainly not from the official figures, which of course are sheer fabrications.  We must look at proxies for economic activity.

The skies over China’s major metropolises, such as Guangzhou, Shanghai, and Chengdu, are still virtually free of pollution.  According to a Morgan Stanley analyst, this suggests that “human activities such as traffic and industrial production … are running 50-80% below their potential capacity.” Car sales are off a striking 92% in the first half of February.

Tyler Durden of Zero Hedge also looked at daily coal consumption, traffic congestion levels, construction steel demand, daily passenger traffic, electricity use, property sales—virtually every proxy for economic activity for which there is available data—and found that China’s economy is, as he put it, “disintegrating.”

It is clear that the second-largest economy is, at the present moment, virtually on life support.  When will economic activity pick back up?  Not until the Chinese people are convinced that they won’t be risking their lives by going about their normal activities.

This may not happen any time soon, despite the efforts of the authorities to strong-arm people back to work.  The police may visit factory owners and order them to reopen, but if half your workers are hunkered down in their native villages, they still won’t have enough manpower to run their assembly lines.

There is a simple reason why tens of millions of workers are simply staying put.  Many face a two-week quarantine if they venture back to the cities, possibly in makeshift detention centers that seem almost designed to spread the disease.  There is a Chinese saying that expresses their concern:  “To be sick at home is not real sick; to be sick on the road can kill you.”

It doesn’t help that, on the plague front, the bad news just keeps coming.  Despite Beijing’s effort to fudge the numbers, it is clear that the epidemic is spreading to other cities, including the capital itself.

The reason is that the coronavirus seems to be far more infectious than SARS, more akin to the flu in this regard.  That means that it can be spread by aerosol transmission.  The virus can literally hang out in the air for hours in rooms and corridors, infecting passersby when no one else is even present.   Making matters worse, the disease can be spread by persons who are asymptomatic, and the incubation period may, at least in some cases, be longer than two weeks.

These inconvenient facts mean that the current screening protocols, such as the two-week quarantine period, will only slow, not stop, the propagation of the disease.  One newly published study by the Imperial College of London estimates that “about two thirds of COVID-19 cases exported from mainland China have remained undetected worldwide.” This means that we can expect considerably more outbreaks outside of China.

Within China, the authorities have surely realized by now that their current containment procedures are ineffective.  That is presumably why they have told the residents of Wuhan, for example, to remain inside their apartments for another three weeks.  No date at all has been set for the reopening of Wuhan’s schools, which of course are prime sites for the spreading of disease.  And even those who have been released from hospitals are facing an additional two-week quarantine, since cases where the “cured” have relapsed have been cropping up.
Despite the danger of contagion, the Communist Party is forcing factories to open and workers back on the job.  The Party is determined to resurrect the economy, even if that means sacrificing thousands–potentially tens of thousands–of lives.

Steven W. Mosher is the President of the Population Research Institute and the author of Bully of Asia: Why China’s “Dream” is the New Threat to World Order.  He is following the epidemic @StevenWMosher