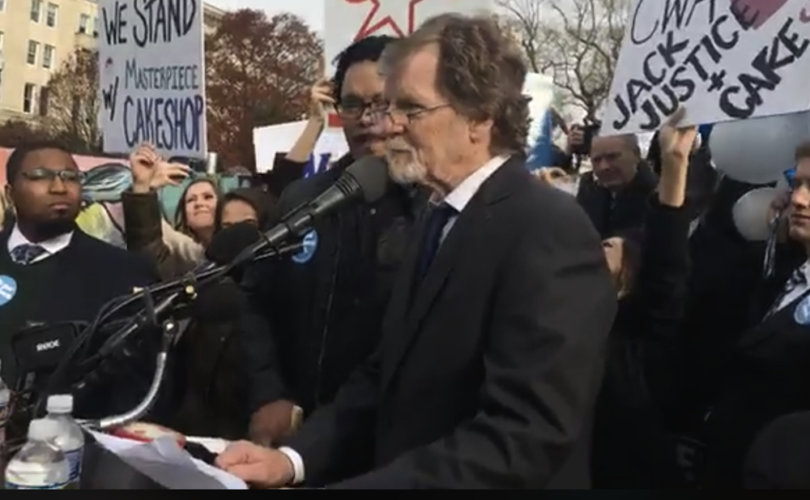 WASHINGTON, D.C., December 8, 2017 (LifeSiteNews) – Three dozen corporations recently banded together to file an amicus brief in which they take a stand against religious liberty in a case now before the U.S. Supreme Court.

In 2015, the Colorado Court of Appeals upheld the decision. Then the Colorado Supreme Court refused to hear the case in July 2016. Consequently, Alliance Defending Freedom (ADF), representing Phillips, asked the U.S. Supreme Court to take it up.

Earlier this week, the Supreme Court heard oral arguments in the case.

In the lead-up to the court hearing, 37 corporations, organized by the LGBT-promoting Human Rights Campaign, joined forces to author their brief on behalf of the gay couple who sought legal action against Phillips for his religious convictions.

Most of these corporations are well known: from Amazon, Apple and American Airlines to PayPal, Pfizer and PriceWaterhouseCoopers.

For the case currently before the court, less than 10 percent of that number have stepped forward as allies in the effort against religious liberty.

Perhaps it’s because they’ve calculated the danger of going on the record against religious liberty and tolerance as just too risky. Perhaps they sense the mean-spiritedness of this case, which is anathema to many Americans who treasure religious liberty as a preeminent, foundational principle.

In any event, it’s an unsurprising anemic show of support for an unpopular notion.

The list of 37 corporations seeking to deny religious liberty

Among several claims made in the short brief, the corporations claim:

“Amici’s diverse employees may be unable to engage in ordinary, everyday commercial transactions because of their identity if Petitioners’ views were adopted. Amici object to such treatment of their employees — or any individual for that matter — on principle, and also for practical reasons. Amici’s employees who are subjected to such discrimination will suffer emotional and psychological harm which is likely to negatively affect their job performance and productivity … Thus, a ruling for the Petitioners would mean that employees choose to work for a company because of its non-discrimination policies, but then must live in an environment where, as a customer, discrimination is permissible.”

The brief makes no mention of the “emotional suffering” and “psychological harm” to Amici’s employees who, like Phillips, have strong religious convictions and may feel discriminated against or silenced in the workplace. It’s statistically impossible to have agreement about the subverting of religious liberty among 100 percent of the employees in any corporation.

Nor does the brief consider the suffering and harm against vendors and other professionals tyrannically forced to abandon both conscience and religion in order to meet the demands of state-imposed will.

“Every American should be free to choose which art they will create and which art they won’t create without fear of being unjustly punished by the government,” said ADF Senior Counsel David Cortman, when SCOTUS agreed to hear the Phillips’ case. “That’s why the bad decision in this case needs to be reversed. It imperils everyone’s freedom by crushing dissent instead of tolerating a diversity of views. We are all at risk when government is able to punish citizens like Jack just because it doesn’t like how he exercises his artistic freedom. America must have room for people who disagree to coexist.”

“The U.S. Supreme Court now has an opportunity to issue a ruling that makes clear the government has no authority to force Americans like Jack Phillips to use their artistic talents to celebrate events with which they have a moral and/or religious disagreement,” said Tony Perkins, president of the Family Research Council (FRC). “With Justice Gorsuch now on the bench, we are more optimistic that the Supreme Court will uphold our nation's long tradition of respecting the freedom of Americans to follow their deeply held beliefs…The First Amendment has long protected Americans from being compelled by the government to advocate a message to which one objects.”