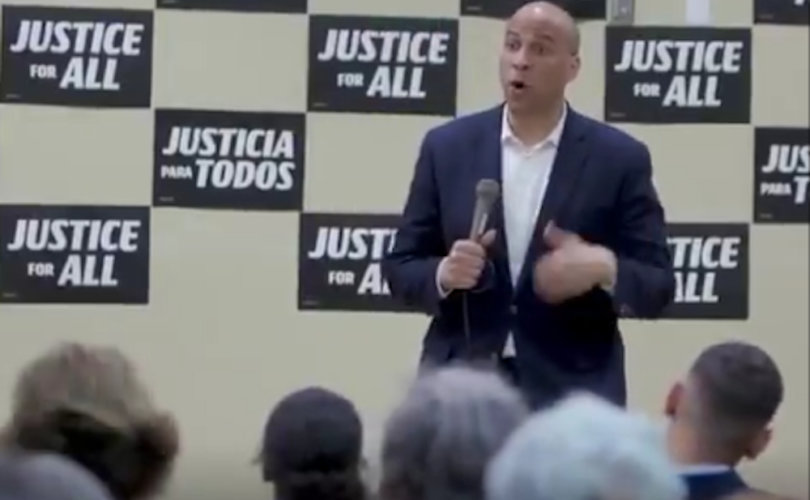 August 23, 2019 (LifeSiteNews) – As Democratic presidential candidates battle for airtime in their efforts to make the next debate stage, the progressive Olympics are fully underway. Elizabeth Warren, with her characteristically magnificent obliviousness to irony, celebrated her birthday at Planned Parenthood. Kirsten Gillibrand attempted to display her rainbow street cred by awkwardly downing a shot in a crowded bar and pausing before croaking, “Gay rights!” Joe Biden is busily scurrying to catch up with the abortion extremism of his colleagues, and Tulsi Gabbard is promising that her experience as a veteran of the War on Terror taught her that her previous socially conservative views on issues like same-sex “marriage” and abortion were wrong.

And then, of course, there is Spartacus. Cory Booker is second only to Kamala Harris in his cloying, insufferable wokeness, and he is apparently determined to prove to the American voters who cast their ballot for Donald Trump that he can be counted on to elevate the transgender cause like no other Democrat. He recently sat down with Maria Keisling, the executive director of the National Center for Transgender Equality Action Fund, and he was so eager to prove that he was fully on board with the agenda that he began by making up a brand-new word: “nie-phew.”

“Nie-phew,” a word which I cannot find on the Internet (not even on any LGBT sites that frequently traffic in the latest fads in woke-speak), is a word Booker uses to describe his brother’s child, a trans activist named Avery who identifies as non-binary. As such, “nie-phew” is a “combination of niece and nephew,” Booker solemnly told Keisling, who was definitely buying what Cory was selling. “[They] have helped their uncle be someone who is more aware of specific issues facing trans youth in schools today.” He used the word “they,” of course, not to refer to more than one person, but as Avery’s presumably preferred pronoun (it seems earlier in the conversation, though, Cory referred to Avery as “she”).

It is his nie-phew, Booker noted, who informed and inspired his commitment to the transgender cause. “I think that this is a moral moment in America and that the next president has to [be] someone that understands that there’s a restoration of the best of our values,” Booker noted gravely. “It has to be done from that office by elevating how we are rendering populations in this country invisible. Marginalizing them is just not acceptable to me. So I hope that one day very soon—let’s call it maybe less than two years—that Avery, my nie-phew, and other great trans leaders in the youth community have a seat at the White House to talk about issues.”

Booker did not explain how the invention of scads of new genders and words like “nie-phew” were, in fact, the “best of our values,” but progressives these days are not particularly inclined to introspection. To their mind, the America that existed 15 minutes ago was a transphobic hellscape where people were either men or women and nobody had any nie-phews, just nieces and nephews. Booker, however, made it clear that he is running for president to change all of that, and trumpeted the fact that his first Senate vote was cast in favor of the transgender ideology.

“For me, the fact that I could be in the Senate for a historic day like that, it really made me feel this jubilance to know that I got to be there for that moment,” he said, oozing that pure and honest sincerity peculiar to men attempting to nail down a presidential nomination. Booker isn’t doing this for himself, you see. He’s running to make sure that the nie-phews of America have a seat in the Oval Office. Not the seat he wants, mind you. But he’s happy to share his power if the trans lobby helps him achieve it, and he is ready to be the champion of our culture’s latest collective delusion.