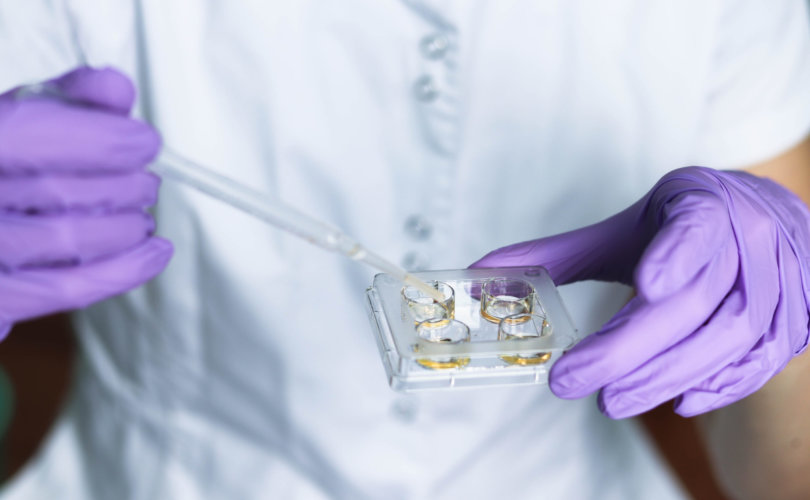 (LifeSiteNews) —The Oviedo Convention is the only binding international text that aims to protect human rights and the dignity of the human being in the field of medical and biological techniques and practice. Linked to the Council of Europe, the Convention is set to undergo a modification of the guidelines for its interpretation. This will lead to opening loopholes in its general ban on editing the human genome in the human embryo.

A working group was set up in June 2021 at the demand of the Bioethics Committee of the Council of Europe (COE), tasked with “clarifying” the Oviedo Convention’s Article 13, which contains a blanket ban on editing the human embryo in the following terms:

“An intervention seeking to modify the human genome may only be undertaken for preventive, diagnostic or therapeutic purposes and only if its aim is not to introduce any modification in the genome of any descendants.”

In other words, any editing of the genome of the human embryo whose modification would be hereditary was declared out of bounds by the Convention, and that is how Article 13 was understood. Editing was allowed for medical, clinical purposes, to help people who are ill or to prevent illness in individuals.

In the field of bioethics, however, scientific progress and changing conditions have long been used as excuses to modify existing regulations as time goes by, adapting laws to the desires and requirements of research. International competition and the “necessity” of keeping up with nations who have no such regulations play a role in this ever-drifting set of norms. French bioethics laws, for instance, give a good example of this mindset: they include a five-year “review clause” by which legislators are invited to continually bring them up to date – and this never leads to added protection for human life and the human genome.

The Oviedo Convention dates back to 1997 and was signed by 35 member states of the COE. Twenty-nine of these are full members of the Convention and have promised to abide by its dispositions. It was negotiated to address “concerns about genetic enhancement or germline genetic engineering by limiting the purposes of any intervention on the human genome, including in the field of research, to prevention, diagnosis or therapy,” according to the Human Rights and Biomedicine Committee of the COE. It clearly prohibited editing embryos who would be allowed to develop as genetically modified human beings.

“This Article was guided by the acknowledgement of the positive perspectives of genetic modification with the development of knowledge of the human genome; but also by the greater possibility to intervene on and control genetic characteristics of human beings, raising concern about possible misuse and abuses,” the Committee added in its June 2021 statement announcing work towards a “clarification” of the letter of Article 13.

In its 18th plenary meeting from 1-4 June 2021, the Committee decided: “Taking into account the technical and scientific aspects” of recent developments in human genome editing “as well as the ethical issues they raise, it considered that the conditions were not met for a modification of the provisions of Article 13.”

This laconic comment could have meant either that the Committee was not worried about the growing capacity to modify or “edit” DNA – what Professor Jérôme Lejeune called “the message of life” – or that the prohibition contained in the Oviedo Convention must not be altered in order to continue protecting the human genetic code. But in deciding to “clarify” when such editing is allowed, including in research, in view of “preventive, diagnostic and therapeutic” purposes, the Committee was already opening the door to a laxer interpretation.

— Article continues below Petition —
The Quebec College of Physicians must not be allowed murder infants
Show Petition Text
4932 have signed the petition.
Let's get to 5000!
Thank you for signing this petition!
Add your signature:
Show Petition Text

As it turned out, the clarifications adopted one year later, in June 2022, by the Steering Committee for Human Rights in the fields of Biomedicine and Health (CDBIO), and presented at the end of last month to the Committee of Ministers of the COE, were issued in particular to stress that research in genome editing for  “preventive, diagnostic and therapeutic” purposes falls under the limits of the Oviedo Convention – but that is also a way of saying that research is allowed under these provisions.

Under the heading “research,” the clarifications state that “the prohibition of an intervention seeking to introduce a modification in the genome of any descendants has the implication that gametes, embryos or their precursors that have been subjected to such intervention may not be used for the purposes of procreation.” This means that under the Oviedo Convention, genome editing in procreative cells or embryos is no longer out of bounds, as long as the edited “embryos, gametes and their precursors” are not “used for the purposes of procreation” – that is, as long as these cells, including living embryos, are not left to develop. In the case of embryos, this means they should be left to die or destroyed, typically by the 14th day of development. But that is only part of the problem: the very fact of tinkering with human reproductive cells and embryos is in itself a grave transgression.

The context, content and “importance” of these modifications were presented in a video by the chair of CDBIO, Anne Foras, who stressed that CRISPR technology has made genome editing simple, cheap, and applicable to a wide variety of organisms. The video underscored the “significant improvements in human healthcare” that could result from the new technique. However, it also recalled that using it on human gametes and embryos raises “ethical, legal and social issues, particularly where a modification of the genome could be passed on to future generations.”

Pete Mills, a member of the Steering Committee, explained that Article 13 was worded to ban human genome engineering for unacceptable purposes such as “human enhancement.” He added that the purposes must be “medical” but that interventions to gain “knowledge” in view of these purposes “may also be carried out.” These would include better knowledge of genetic disorders and the “development of means to treat, diagnose or prevent the occurrence of such diseases or disorders,” both in the fields of clinical intervention and research.

Anne Foras explained that the new clarifications show that the provisions of article 13 also fully apply to research, and she said that “prevention, diagnosis and treatment” of “diseases or disorders” apply to such “ailments” as are commonly defined under international standards.

However, the fact that genetic engineering of human embryos for research is now considered “ethical” by the Oviedo Convention was conveniently left in a haze of repetitive statements.

Généthique.org, the bioethics news site edited by the Fondation Jérôme Lejeune in France, issued a clear explanation of what is underway: “The last remaining prohibition is on the use of modified gametes, embryos, or their precursors for reproductive purposes. So doing, the only binding international text in bioethics now allows the editing of the genome of human embryos.”

The push for editing the human genome has already led France, which ratified the Convention in 2011 (but not its additional protocols, including the one that banned human cloning) to legalize the creation of “transgenic embryos” or “chimeras” by modifying their genome and even by introducing animal elements in human embryos. France interpreted the Convention as allowing this further transgression in its most recent bioethics laws in 2021. Such moves by member states of the Convention may have weighed on the Committee’s decision to modify the text via “clarification,” thereby avoiding a modification of the Convention itself which have required a unanimous vote and would never have been greenlighted by some states.