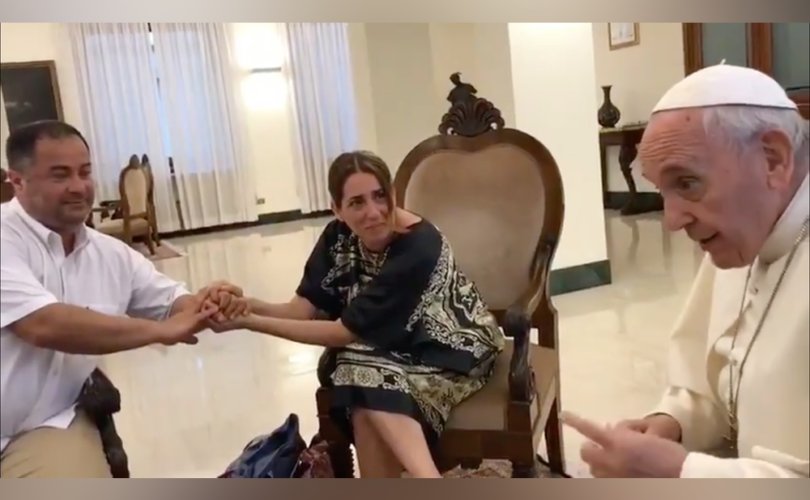 September 24, 2018 (LifeSiteNews) – Pope Francis has done it again. During a private audience at Santa Marta in Rome, which preceded the general audience in St. Peter's Square last Wednesday, the Pope blessed a civilly married couple in a whirlwind ceremony including a general absolution for all those present. We all remember the (not so) spontaneous in-flight wedding of two crewmembers in the airplane flying Pope Francis over Chile last January. This time, the Uruguayan couple involved appears really to have been taken by surprise, and there is a complete video of the one and a half-minute event to prove it.

Noelia Franco and Omar Caballero were united in a civil marriage 24 years ago. Five daughters, two sons-in-law and one granddaughter later, they were hoping not so much to regularize this irregular situation as to obtain Pope Francis’ blessing.

This story commences with what they feel was the miraculous healing of their youngest daughter, Sara, 4 years old, who was in intensive care with respiratory distress. One of Noelia’s friends in Montevideo, Uruguay had brought back holy water from Rome, blessed by Pope Francis. The distraught mother poured a few drops of it on her daughter's forehead: Sara, she says, immediately took a turn for the better and was soon out of intensive care.

The news spread (Noelia started her career at 17 as a journalist and for the last 12 years, she’s been running a public relations company with her husband Omar). In April 2017, she decided to bring her little daughter to Rome in order to thank Pope Francis during a public audience. She also took holy water blessed by the Pope back to Montevideo. She started handing it out to friends in need – and obtained, so she says, a number of miracles, thanks to the Francis-blessed water.

At this point, the Franco-Caballeros decided they needed to go to Rome to tell the Pope about what was happening, to thank him and to ask for his blessing. Last July, Noelia Franco sent an email to Monsignor Fabian Pedacchio, Pope Francis’ private secretary who was before that, according to Henry Sire’s Dictator Pope, Cardinal Bergoglio’s eyes and ears in Rome. She asked for an invitation to the Pope's public audience on September 19th, adding a letter to Pope Francis himself that has been published by the Uruguayan press.

Its most important excerpts read as follows:

“We would like to thank you for all these blessings received from the moment you made us return to our faith in the church, and we want you to bless our marriage.

“This year, we celebrated the 24th year of our marriage, my husband and I. When we got married we had no money for wedding rings and even less for a party or for the white dress. We always had the idea that we would have to get married in church, but being able to see you with our family would be the greatest blessing that we could receive.

“In all, there will be four adults, two teenagers and two children.

“We don't want to ask too much, we’re just asking you for 30 seconds to say thank you; we shall be on a trip to Rome from the 13th to the 20th of September, we would like yourself and your team to accept to have this meeting with our family on the day that will fit you best, or during the Wednesday audience on September 19.

“May God bless you, Francis.”

The response came quickly, and it was a surprise: the Pope himself had fixed a meeting at the Casa Santa Marta on September 19th, three-quarters of an hour before the general audience.

The meeting itself lasted a quarter of an hour. That is a great deal more than the “30 seconds” the family had asked for, Noelia and Omar hoping only for a quick blessing, but even so it is still difficult to speak of a fully fledged marriage ceremony. The father, the mother, three of their daughters, two sons-in-law and one granddaughter had a relaxed talk with the Pope. Family pictures were shown, photos were taken, they talked and joked. Pope Francis gave them his advice on having a lasting wedding.

“With you, bread and onions”, he said. It's a Spanish expression that harks back to ancient Egypt when bread and onions were staple food for the poor who couldn’t afford much else. It means staying together even during the hard times.

The whole group sat around a low table in armchairs and they were still all sitting there when the Pope decided it was time for a collective absolution. He spoke about some of the sins they could have committed, and of the “hitches that there had certainly been in their marriage”. He added that this was also the time to thank God for His grace that had “kept this family so united” and also for “so many fruits” it had given: “It is truly a great grace.” The grace of the sacramental union? Hardly… Then he blessed them all, in the name of the Father, and of the Son, and of the Holy Spirit, saying that he absolved them “of all their sins”.

Collective or general absolutions in the Catholic Church are normally strictly reserved for emergency situations, such as an impending disaster or the moments before a battle when a military chaplain has no time to hear individual confessions. Much abuse has been recorded during the decades following Vatican II, with priests organizing penitential celebrations with collective absolution and no individual confessing of sins. The Congregation of the Doctrine of the faith published pastoral norms as early as 1972 which make all this clear. Among others, when circumstances allow, penitents should at least say an act of contrition, and when grave sins are involved, survivors should confess them individually within a year.

The video of the Pope’s general absolution does not show any of this. Perhaps because that part was not filmed – but it does not seem likely. It all sounds more like a friendly conversation where a sacramental absolution suddenly appears out of the blue. This raises the question: is living together as man and wife in a civil, non-sacramental marriage on the part of Catholics still a mortal sin, or not? Pope Francis appears to point to an answer which is a departure from Catholic teaching and tradition when he opined in June 2016: “I’ve seen a lot of fidelity in these cohabitations, and I am sure that this is a real marriage, they have the grace of a real marriage because of their fidelity.”

Seconds later, Pope Francis asked the couple to hold hands, posing the question: “Do you want to stay together?”  The video then shows Noelia turning to Omar: “Are you sure?”, she said. “Of course”, he replied. The Pope then looked inquiringly at Noelia, who said: “Yeees…” He blessed them again without words, before asking God to “keep them always together” and to give them “the grace of having many grandchildren”. And that was it.

Noelia, visibly surprised and moved, observed: “There we are, we’re married.”

The same day, she would post the video on twitter with these words: “Then one day… the Pope who speaks your language marries you in private under the eyes of your children. I have no words, 15 minutes of private audience with @Pontifex_es at Saint-Marta where our dream of marrying in church and having our marriage blessed.”

According to the Uruguayan daily El Pais, Noelia Franco told their reporter she was “in tears” during the ceremony. She recounted more details.

“Then Francis entered. He greets us, we start making jokes and telling anecdotes. He asked us whether we wanted to stay together and whether we wanted to get married and that after the Vatican would send the certificates. Our sons-in-law acted as witnesses and we got married,” she said.

The Uruguayan news-site Telenoche says Noelia Franco is a Catholic. It is not clear whether Omar Caballero is also a Catholic (that is the whole point of having engaged couples produce their baptism certificates before obtaining a church wedding, and doing other sorts of paperwork to check identities, make sure there was no previous sacramental marriage and so forth), nor does anyone seem to know or even care whether their five daughters were baptized.

The question is not whether Caballero and Franco are sincere in their desire for marriage and their commitment to remain faithful to each other as long as they both live (although that question was not put to them). The critical issue is the banalization of the sacrament of penance and of that of marriage, which here appears to be devalued to the point of being an on the spot blessing that simply completes a lasting civil union.