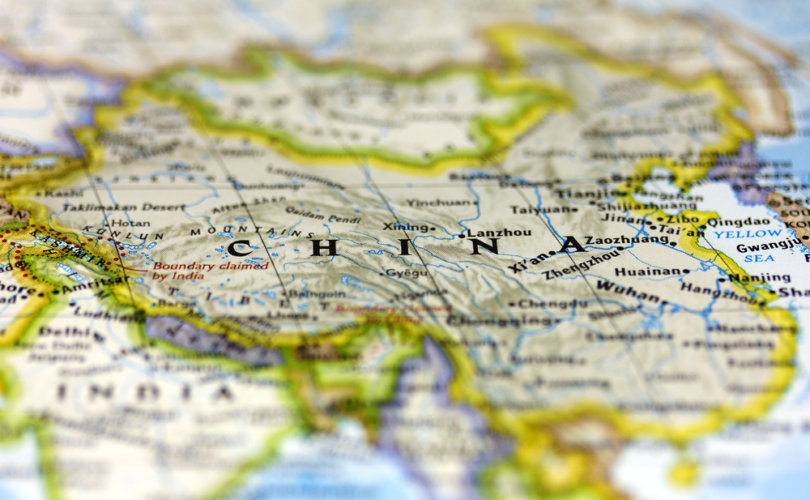 (LifeSiteNews) — It is for good reason that Francis Gasquet, whose book on the Black Death was published in 1908, asserted that “China is the great breeding ground of epidemics.”[1] Genomic analyses have shown that smallpox, the bubonic plague, and multiple deadly influenzas, including the “Spanish Flu,” actually originated in China.

It is perhaps fitting that the earliest known epidemic for which we have archeological evidence swept across northeastern China 5,000 years ago. It was a precursor of things to come.

A few years ago, excavating the site of a prehistoric village, Chinese anthropologists discovered a tiny house choc-a-bloc with bodies. Almost a hundred corpses had been hastily thrown into the single-room of the dwelling 5,000 years ago, after which it was burned to the ground and the village itself abandoned. Fire was the chief purifying agent of primitive man.

The village was located in China’s northeast, a vast area stretching from just north of Beijing all the way to the Amur river which marks the border with Russia. Hamin Mangha, as the site is called today, contained the foundations of 29 houses, but only one was filled with human bones. The 97 bodies had been stacked two and three high, suggesting that they had died too quickly to be properly buried. Half were children, the others were adults, and not a single one was over the age of 35. Because of infectious diseases, lifespans were much shorter then.

After considering a number of different scenarios, including warfare and earthquakes, the anthropologists Zhu and Ji concluded that “the large death toll might have been caused by a plague in the Horqin Sandy Land [in northeast China] 5,000 years ago.”[2]

The outbreak doesn’t seem to have been restricted to Hamin Mangha, to judge from the existence of another mass burial site dating from the same time. A couple hundred miles away lies Miaozigou, which was excavated some years earlier. The skeletons unearthed there were piled together in similar fashion and were the same age as the Hamin Mangha victims. Something had happened in Miaozigou that likewise killed a lot of people in a hurry and led the survivors to abandon the spot as accursed.

“This similarity [between the two sites] may indicate that the cause of the Hamin Mangha site [disaster] was similar to that of the Miaozigou sites,” the authors wrote. “That is, they both possibly relate to an outbreak of an acute infectious disease.”

But if an epidemic devasted the entire region, what acute infectious disease may have caused it?

Chinese scientists are unable to give a clear answer to the question of what killed the residents of Hamin Mangha and other settlements up to hundreds of miles away. It could have been smallpox which, in one form or another, plagued humanity for at least 10,000 years before it was eradicated a few decades ago.

We know from written records that practitioners of traditional Chinese medicine have been grappling with deadly strains of smallpox since well before the birth of Christ. By 200 B.C., they had already invented an early form of vaccination, called variolation, to protect people against the disease.[3] Smallpox was certainly deadly enough to kill half of the population of Hamin Mangha, a death toll so high it may have led the survivors to burn their remains and flee the village in horror.[4]

But there is an invisible killer even deadlier than smallpox that may have struck Hamin Mangha. This would be the same disease that was responsible for three of the greatest pandemics in recorded history — the Plague of Justinian, the Black Death, and the Yunnan Plague — the Bubonic Plague.

All three plagues, each of which made their way West, can be traced back to major epidemics in China. But the Celestial Empire also endured many other outbreaks over the course of time. The historical record suggests that China, at least from the time of the first Shang dynasty (1600–1046 B.C.) has probably never been completely free of the plague.[5] The reason is that China is the ancestral home of the plague bacillus, Yersenia pestis, and certain populations of rats and other rodents there serve as natural reservoirs of the disease.

The preliterate people who lived in Hamin Mangha did not leave us a written record of their travails, but the archeological record establishes that they relied on both farming and hunting for food. And among the animals they hunted was a ground-dwelling rodent — something like a prairie dog — called a marmot. Marmots, as it happens, are among the natural reservoirs of the Plague bacillus.

Even today, marmot hunters in northeast China occasionally come down with one or another variety of the Plague through contact with infected animals. Hunters can become infected not just through bites from infected fleas, but by direct inoculation while handing or skinning carcasses of infected marmots. For this reason, illnesses and even deaths from Bubonic Plague are not uncommon in northeast China, even though the disease itself can now be easily treated with antibiotics if diagnosed early.[6]

The last major epidemic of the Plague occurred in China’s Northeast in 1910–11. Medical experts trace this epidemic — this time of the deadly pneumonic variety — back to marmot hunting as well.[7] Estimates of the death toll range up to 60,000, but this number is largely based on urban statistics.[8] It is impossible to know how many people in the surrounding countryside or remoter villages succumbed.

Aside from the Plague, there is one other suspect in the murder mystery that is Hamin Mangha. We cannot rule out the possibility that this early epidemic was caused by a novel influenza virus. Many influenzas have crossed the species barrier over the millennia and taken up residence in new host populations of human beings. This may have been a true zoonosis, as such infectious diseases are called, of a new and deadly virus.

We know such zoonotic transfers have often happened in China. The Chinese have eaten marmots — and pretty much everything that flies, walks, crawls and swims — since time immemorial, providing countless opportunities for such infections to occur.[9] And once it does, China’s large population also provides ample opportunity for such a virus (or bacteria) to gain a permanent foothold among its new hosts and become an endemic disease. The several viral pandemics that have emerged from China over the past century or so, including the Spanish Flu, the Asian Flu, the Hong Kong Flu, etc., are proof enough of this.

Returning to our plague village of Hamin Mangha, we cannot know today whether the villagers perished of smallpox, the Bubonic Plague, or some unknown but deadly flu virus.

The only thing we are sure of is that the residents of Hamin Mangha did not die of something like COVID-19 or, as I call it, the China Virus. That particular scourge would have to wait until PLA bioweapons experts had mastered 21st century genomic technology, created an enhanced coronavirus in the lab, and released it upon the world.

The China Virus is an “Unrestricted Bioweapon”

Humanity is constantly being bombarded with zoonotic bacteria and viruses that, by reason of random genetic mutations and recombinations, manage to cross the species barrier to infect mankind. If the virus in question is highly lethal but only moderately infectious, it infects a small number of people, kills them quickly, and then dies out with its hosts. If, on the other hand, the virus is highly infectious but, say, causes little more than the sniffles, it might stick around for centuries in the human population. The common cold has been with us since the beginning of time and may well still be around at the end.

Every once in a while, however, a nightmare emerges from nature. Often the result of a close encounter with a bird or a swine, a novel pathogen arrives on the scene that both spreads quickly and also kills mercilessly. A pandemic follows, and millions, or tens of millions, of people die.

The China Virus is different. It did not manage to cross the species barrier on its own. In fact, its precursor did not even exist in nature. It is a manmade virus, the result of artificial laboratory insertions into an existing coronavirus.

The goal was to create an “unrestricted bioweapon”–a virus that was highly infectious but only moderately lethal that its makers could plausibly deny any connection with. The pandemic that followed the virus’ release, like the virus itself, was the first manmade pandemic in the history of the world.

But perhaps not the last.

Steven W. Mosher’s forthcoming book, The Politically Incorrect Guide to Pandemics, can be pre-ordered on Amazon.