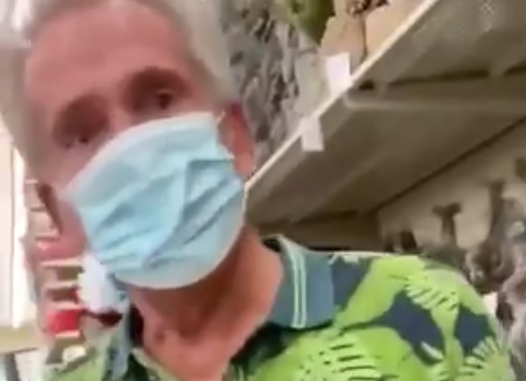 December 16, 2020 (LifeSiteNews) — I’ve been going to the local gym for the last four weeks. Election season is always stressful, and Michigan winters are cold. Seeing how I work from home and all the restaurants in my state are closed due to our tyrannical governor, Gretchen Whitmer, exercising at the gym provides a much needed escape.

One of the gym’s requirements is that you have to wear a mask and wipe down the equipment after you’re done with it. I’m fine with that.

But every once in a while, when I’m running on the treadmill, rowing, or doing some other strenuous activity, my mask slips beneath my nose. I’m not the only one this happens to. I’d venture to say that at least half of my fellow gym-goers have their masks under their noses for an extended amount of time as well. Staff rarely, if ever, walk up to them and ask them to pull them up. They seem to be aware that people need to take deep breaths when performing intense workouts.

This past week, a guy has been pestering me about my mask not being over my nose. On multiple occasions, he’s walked over to me, breaking social distancing rules. One time, he asked me, while I was in the middle of a planking exercise where my hands were out in front of me on the floor, to pull it up. No “hello” or “hey, what’s your name?” Just a cold-hearted request for me to put the cloth on my face over my nose. Eventually, he told the front desk worker that I wasn’t following the rules.

These sorts of impersonal, hard-and-fast interactions, purportedly rooted in the “science” that masks make us safe, are becoming all too common in America. Every day I hear new horror stories about how someone at a store or a family outside at the park has been berated by a COVID Karen for not wearing a mask. The video below, which shows a guy yelling at a woman to “put your mask on,” has been making the rounds on social media as of late. It should send shivers down your spine.

What is wrong with people?
pic.twitter.com/W8yY7z0sbo

There’s clearly some sort of shift happening to human beings at a subconscious level with all this mask-wearing. It’s complex, but here’s what I think is going on.

Firstly, wearing a mask is how you show that you’re “in the club.” Masks indicate that you’re “following the science” and that you’re a part of the majority and superior to those who don’t wear one. There’s a sort of collective brainwashing going on that’s teaching people to hate those who aren’t “in the club.”

Second, wearing a mask is a form of virtue-signaling. It shows we’re “doing our part” to help protect others. It’s a sort of secular work of mercy, a pinch of incense, if you will, demanded by the state religion of liberalism.

But there’s another thing that masks do that’s equally repulsive: they hide our faces. Now, why does that matter? Because by not seeing other people’s faces, you can’t see anyone’s emotions. You can’t see, in other words, them smiling and laughing, two thing that make us uniquely human and are some of the most pleasurable things the human eye can observe.

Masks also discourage small talk and seem to disincline us from giving compliments to someone about their appearance. Moreover, they disallow us from flashing a smile to an overjoyed infant sitting in their mom’s shopping cart in the check-out lane. What a sad thing that we can’t smile back at happy children anymore.

As far as I can tell, these masks are turning us into trans-humanist robots. They’re making us view and treat other people as sub-humans, as mere carriers of a virus to be avoided and reported to authorities immediately instead of treating them as children of God whom we should interact with in a charitable way.

I’m not excited to go back to the gym this week. I imagine I’ll be asked yet again to put my mask over my nose when it falls below it. If I am, I’ll comply as best as I can. But I’ll also respond with a kind “hello” and try to get to know the guy who’s been on my case the last few weeks. Maybe we’ll have some things in common. Maybe we won’t. Either way, at least I’ll have tried to interact with him in a joyful, Christian, and human way.