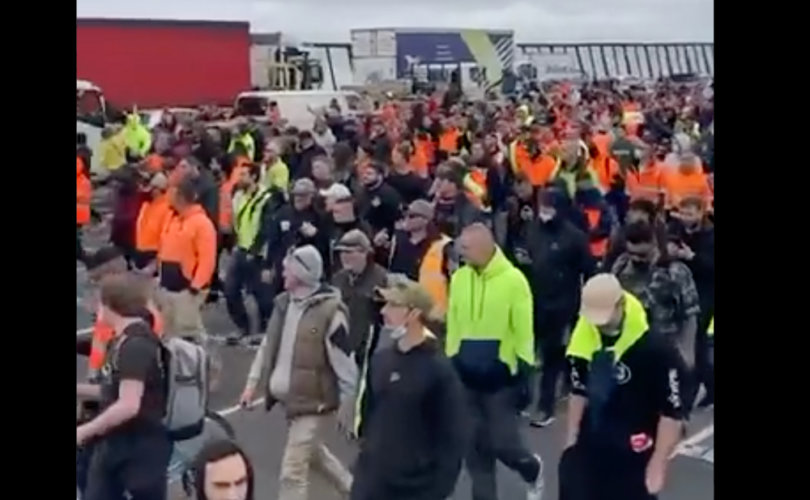 MELBOURNE, Australia (LifeSiteNews) — Melbourne routinely wins awards for being the world’s most liveable city. The infrastructure is excellent, everything works as it should, the weather is mostly pleasant, crime is low, and the people are for the most part friendly.

But in the last two years all that has changed. Because of the COVID crisis, the city has been turned into something more like a war zone. The streets became empty, citizens were locked in their houses, freedom of movement was restricted, workplaces ceased to function, the economy slowed down sharply, and police started to commit acts of violence against ordinary people because they had the temerity to protest against the tyrannical measures. For the first time, people began to fear the authorities and, in many cases, each other.

This is the subject of the documentary Battleground Melbourne created by a prominent protestor and democracy advocate, Thoper Field. He shows how Premier Daniel Andrews orchestrated an attack on the basic rights of the citizens of Melbourne, citing “health advice.” Any criticisms were with the meaningless mantra that they were “following the science – so shut up and obey.”

That science advice, of course, was never submitted for public scrutiny. Anyone who questioned it or offered scientific arguments and evidence that contradicted the political narrative was viciously demonised and censored. Especially ridiculous was the use of computer models to form policy, even when that modelling proved to be so wrong it would have been better to use a dart board (a common problem with most modelling).

The most savage attacks by the Victorian government were mounted against those who exercised what they thought was their right to protest publicly. Field, who was himself arrested, reveals graphic footage of brutal police tactics used against unarmed, peaceful protestors. When the initial attempts by the police to instil fear did not work, they resorted to using armoured trucks designed for a foreign enemy, not unprotected civilians. It was Battleground Melbourne indeed.

Field presents some of the people who will be remembered in history as the ones who stood up against tyrants. Perhaps the worst treated, and certainly one of the bravest, was Monica Smit. We are shown footage of her being arrested without explanation. Then we hear how she spent 22 days in jail, her imprisonment including a humiliating strip search, because she refused to back down under police threats. There are many others taken from all walks of life, including Rukshan Fernando, a wedding photographer who became, in effect, a war photographer.

The documentary shows multiple instances of outrageous police actions, including the use of rubber bullets, the pepper spraying of an older woman lying on the ground, and military-style tactics to hunt down and provoke protestors. Two former police officers express what many others in the police force must have felt – that instead of protecting the public, they were told to do the opposite.

The main value of the documentary is its reconstruction of the sequence of events. It shows that Andrew’s tactics of intimidation were deliberate and that he is a vicious and egotistical bully. His overriding interest was to exert power and to look like he had saved the state. When he realized that his strategies were failing, he shifted to the vaccine mandates for political expediency: if everyone could be force-vaccinated, he could cover up his failures. As Field says, it was clear that this had little to do with public health and everything to do with politics.

Just how tyrannical Andrews has become was confirmed when he arrogated to himself unilateral power to declare, at any time, a pandemic and implement lockdowns. That kind of power has never been concentrated in the hands of one person in Victoria. The state’s legislature is controlled by the party in government, not the party’s leader. But Andrews is effectively positioning himself as the head of the Executive, and claiming that he, together with another member of the Executive, the Chief Health Officer (an unelected bureaucrat) should be free to issue more “mandates” whenever he likes. He got his way.

Revealingly, the word “mandates” is used because they are not “laws.” What the state governments have been doing is illegal under Federal law, which always overrides State law. By shifting the “mandates” to the Executive arm of government, however, state governments dodged that constraint. They are the criminals.

Virtually every health policy imposed by the Andrews government has failed. Lockdowns did not “stop the spread.” The vaccinations, which were promised to be “one shot to get out of here” have been a complete failure. In the first half of 2021, according to the Worldometer, there was only one serious case in Australia of coronavirus and handful of people who tested positive. Now “cases” (positive tests, not necessarily someone who has symptoms) are in the thousands per day, and there are more serious and critical cases. So much for the vaccines, which are actually experimental gene therapies. It is now being admitted that they do not prevent infection or transmission, and do not provide much protection against the new variants.

What has the Andrews government’s response been? To push hard for boosters, as if to say “The vaccines don’t work, so let’s have more of them.”  Ads on Melbourne TV urging people to get a boosters play continuously; it is taxpayers’ money used to propagandise taxpayers. Andrews is also hinting that he will make boosters a condition of having the right to work or go to cafes and restaurants.

For those of us who have lived in Melbourne all their lives, and have been awake to the political tyranny, it seems that the harm will be lasting. There will be a lingering suspicion of the aggressive fellow citizens who attacked us for not following the rules. The attitude of those who are compliant—and have been hypnotised by the relentless propaganda—is getting even worse as it becomes obvious, even to them, that nothing makes sense and the vaccines do not work.  Yes, a few do wake up, but most are coming to the irrational conclusion that if things are not making sense, it must be because the rules were not followed strictly enough. Consequently, they are becoming even more aggressive.

To this writer it has long been obvious that the institutions and norms that underpin Australian society are rarely understood or appreciated by Australians themselves. We are not taught civics and tend not to ponder such matters. They are just taken for granted. Worse, many of those moral and ethical foundations are Christian in origin, and there has been a sustained and partially successful attack on Christianity for decades in Australia, which has further hidden them from view.

It is different for migrants, or people of migrant heritage, some of whom feature in Field’s documentary. Having come from more politically fraught countries, they tend to have a much better understanding of how important those moral and legal principles are – and why they are worth fighting for.

But many Melbournians, it turns out, were quick to abandon the very things that made the city a great place. The rot can be seen across the spectrum: the judiciary, the public service, the media, academia, and the medical community. The shame of having betrayed our society will be long lasting.

David James is a Melbourne-based journalist.