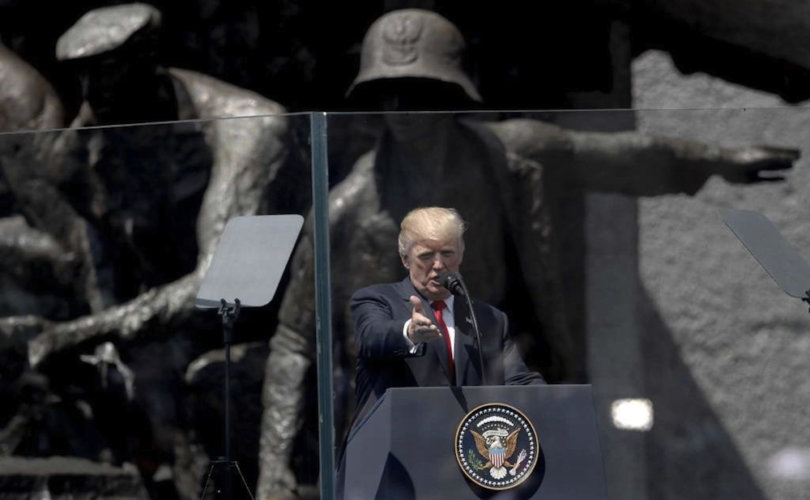 OK, maybe not literally, and maybe clean up crews weren’t out scraping up liberal gray matter from the streets and sidewalks of Washington, D.C., and Manhattan, but liberal media provided plenty of evidence of pundit brains unable to process the idea of celebrating family, freedom, country and God — the very things most people hold dear, if not dearest, in their lives.

The Left freaked out. Totally

Leftist pundits were quick to associate President Trump’s words with the “alt-right,” i.e., far-right fringe groups. They sought to sever the President from mainstream Americans for whom they feared his words might resonate deeply.

Regarding the President’s assertion that “the fundamental question of our time is whether the West has the will to survive,” Zach Beauchamp tweeted, “This is an astonishing line coming from a U.S. president. This is what the alt-right has been saying for years.”

Beauchamp couldn’t stop there, “Most of us see the West's crisis as being the weakening of its commitment to liberal values. Trump sees said weakening as the *solution.*” When Beauchamp says, “most of us,” he is referring to his small, insular group of fellow pundits.

Jamelle Bouie joined the tweetstorm, “Imagine being a political writer in this moment and being utterly unable to identify clear white nationalist dogwhistles.”

Vox’s Sarah Wildman also chimed in, “This morning in Warsaw, Poland, President Donald Trump issued a battle cry — for “family, for freedom, for country, and for God” — in a speech that often resorted to rhetorical conceits typically used by the European and American alt-right.”

The Atlantic’s Peter Beinart said, “In his speech in Poland on Thursday, Donald Trump referred 10 times to ‘the West’ and five times to “our civilization.” His white nationalist supporters will understand exactly what he means. It’s important that other Americans do, too … The West is a racial and religious term. To be considered Western, a country must be largely Christian (preferably Protestant or Catholic) and largely white.”

Why the explosive response from the Left?

But to a left-leaning punditry back home, Trump’s speech was perceived as a direct threat to many of its causes, especially the promotion of abortion, euthanasia, the undermining of biological families, and chasing faith and the church itself out of the public square.

At the outset, President Trump spoke of St. Pope John Paul’s triumphant return to Poland in June 1979 when “one million Poles gathered around Victory Square for their very first Mass with their Polish Pope, that day, every communist in Warsaw must have known that their oppressive system would soon come crashing down.”

The President continued, “They must have known it at the exact moment during Pope John Paul II's sermon when a million Polish men, women, and children suddenly raised their voices in a single prayer. A million Polish people did not ask for wealth. They did not ask for privilege. Instead, one million Poles sang three simple words: ‘We Want God.’”

Perhaps what the communist regime ruling Poland feared back then is exactly what our leftist pundits fear today now that Donald Trump occupies the White House and Republicans hold the majority of seats in both houses of Congress and in statehouses and governor’s mansions throughout the country. Paraphrasing the President, they must sense their oppressive, statist designs for America will soon come crashing down.

And what can be more repulsive to the left than those three words, “We want God?”

President Trump averred, “Together, with Pope John Paul II, the Poles reasserted their identity as a nation devoted to God.”

Likewise, the identity of the United States has undergone violent assault from within, from a small but powerful band of elite jurists who have changed the definition of marriage, undone the meaning of man and woman, boy and girl, and have sought to shut down and criminalize religious liberty and adherence to faith and conscience at every turn.

No wonder the President’s words have panicked the left, causing the media freakout we now witness.

The President didn’t stop there: “We must work together to confront forces, whether they come from inside or out, from the South or the East, that threaten over time to undermine these values and to erase the bonds of culture, faith and tradition that make us who we are. If left unchecked, these forces will undermine our courage, sap our spirit, and weaken our will to defend ourselves and our societies.”

With those words, he rightly called attention to the incremental totalitarianism that threatens our nation, primarily through the courts, through the indoctrination of our children via liberal academics at our universities, and through the relentless media barrage promoting everything from Planned Parenthood to “same-sex marriage” and “transgenderism.”

The Left can’t succeed if people are free to speak truthfully. This is why from day one they have searched for any way possible to shut down the President, to silence him, to distract from the important things he is saying and doing, to ridicule and deride him.

Outside of their shrinking urban ideological bubbles, it’s not working.

Trump said, “We put faith and family, not government and bureaucracy, at the center of our lives. … And above all, we value the dignity of every human life, protect the rights of every person, and share the hope of every soul to live in freedom.”

“The fundamental question of our time is whether the West has the will to survive. Do we have the confidence in our values to defend them at any cost? Do we have enough respect for our citizens to protect our borders? Do we have the desire and the courage to preserve our civilization in the face of those who would subvert and destroy it?”

Back to those exploding heads

The left has relied on American citizens and those of other nations to not have the confidence to defend our values at any cost, to not have enough respect for ourselves to protect our borders, and most important, to not have the required desire, will and courage to preserve our civilization from the elite few who seek to reshape and re-engineer it according to their statist dreams.

Trump’s speech caused heads to explode because it is a direct assault on liberal ideology while at the same time condemning the tactics of the left.

The Left seeks to bring about change not with guns and tanks; it seeks to do so quietly, subversively, undermining our culture from within. The Left has learned that the real battle is for hearts and minds, not against enemy artillery.

“Our own fight for the West does not begin on the battlefield — it begins with our minds, our wills, and our souls.

“Today, the ties that unite our civilization are no less vital, and demand no less defense, than that bare shred of land on which the hope of Poland once totally rested. Our freedom, our civilization, and our survival depend on these bonds of history, culture, and memory.”

“So, together, let us all fight like the Poles — for family, for freedom, for country, and for God.”