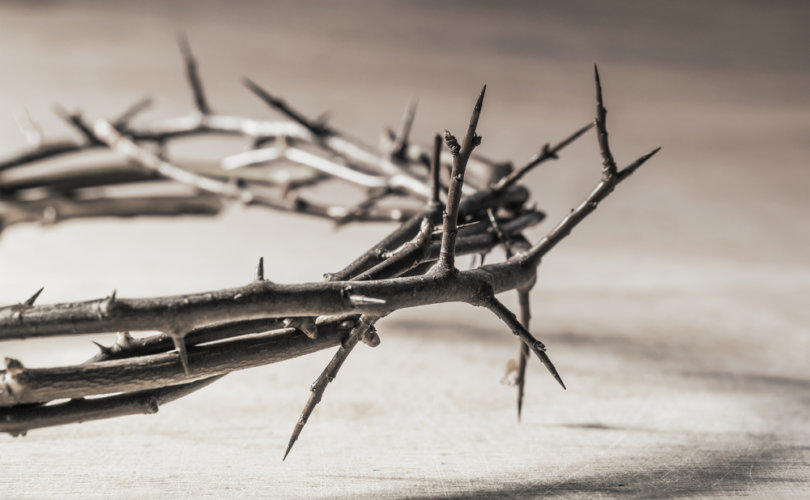 April 4, 2019 (LifeSiteNews) — On Friday, March 29, the cathedral of Notre Dame de Paris was silent — the silence broken only by the rhythmic jangling of a large and precious incense-bearer.

Several dozen Knights and Ladies the Holy Sepulchre processed toward the center of the nave, from where they solemnly and silently moved to the high altar draped in purple. They were there for a reason: for their knighthood, which is to preserve and protect the holy relics of Christ’s passion. The Holy Crown of Thorns is about to be presented to the faithful.

Borne by a priest in traditional red vestments, the Crown reposed on a red velvet cushion in a crystal and gold reliquary that allowed the faithful to see the relic in detail, as they did when they approached for individual veneration.

As the procession advanced in the hushed medieval majesty of Notre Dame, Catholics from all over the world fell on their knees as the reliquary approached in the first part of the nave, which was closed to tourists for the duration of the ceremony. The Holy Crown of Thorns is considered to be one of the holiest relics of Christendom, second only to the Shroud of Turin.

The veneration of the Holy Crown of Thorns is a regular event in Paris and, strangely enough, not a well known one, even by Parisians. It takes place every Friday during Lent and on every First Friday during the rest of the year from 3 p.m. to 4:30 p.m. On Good Friday, there is exposition from 10 a.m. to 5 p.m. The veneration is always done with great solemnity and accompanied by prayers and lectures led by the Cathedral rector, Msgr. Patrick Chauvet, and other clergy.

On March 29, Msgr. Chauvet invited the faithful to meditate on the theme of the “suffering servant” who, prefigured by Job, accepts pain and injury in expiation of mankind’s sins. His words were all the more striking through the presence of one of the instruments of the Passion of Our Lord, the Crown of mockery and insults whose thorns deeply wounded His divine face.

“Throughout His passion, Christ presented Himself as a true King,” Msgr. Chauvet explained, recalling that the crown of thorns was on His head until the end. “But He is not as our kings, His Kingdom is that of Heaven,” a kingship that gives all for the salvation of its subjects.

After a series of lectures, meditations and chants under the firm and friendly guidance of the Knights of the Holy Sepulchre, the faithful were invited to come forward, one by one, to personally venerate the holy crown of thorns, either by touching the reliquary or by kissing it.

It was a deeply moving moment. Returning to their seats, many pilgrims brushed away tears, having in a way touched the sufferings of Christ and being touched by Him.

Europeans, Asians, Japanese, blacks … aristocratic faces and ordinary ones, workers with a few hours to spare, young and old, pensioners from the Paris region, classes from Catholic schools, tourists who’d come for the occasion or who joined the ceremony by chance. The universality of the Church was palpable. Differences are not erased, but all are joined together in the common worship of Our Lord.

Paris is truly privileged to have in its heart such a special treasure that gives witness to our Savior’s self-giving love.

The Holy Crown of Thorns is mentioned in the gospel of St. John. The “disciple whom Jesus loved” tells how Roman soldiers mocked Christ after He was flogged on Good Friday morning. They covered him with a purple mantle and viciously pushed a crown covered with numerous thorns onto His head in order to provoke an agony of pain.

Certainly, the instruments of the passion, bearing traces of the precious blood of Jesus, were reverently kept by His mother and disciples. Their trace was lost or at least their location was not known in the centuries immediately after the crucifixion and resurrection of Christ. Many historians believe that they were purposely hidden away in times of persecution.

A tradition subscribed to by St. John Chrysostom indicates that St. Helena, mother of Constantine and the emperor of Byzantium, had a vision around the year 325 that led her to discover the holy cross in Jerusalem, when she ordered her servants to dig in a certain place. Of the three crosses found, only one miraculously healed a dying woman. The wood of this cross was collected and parts were distributed in the Christian world. St. Helena is also said to have found the “titulum” bearing the letters “INRI” near this Cross.

From the fourth century on, not only the cross but other relics of the passion were publicly venerated. Through the centuries, many would be taken to Constantinople for safekeeping because of the Persian invasions, and relics also became a sign of prestige for the Christian empires and monarchies of the time. The crown of thorns’ existence and the veneration it received are attested from the fourth century on.

The future St. Louis, king of France in the 13th century, decided to buy the crown and several other relics from the Latin emperor of Byzantium, Baudouin II de Courtenay, who was in financial need. Louis also had to pay Venetian bankers, who had accepted the crown as security for the Latin empire’s debts.

The negotiations were successful and on August 10, 1239, King Louis IX went in person to receive the relics in Villeneuve l’Archevêque, 80 miles from Paris. Not only the crown of thorns but a number of thorns of the Spina Christi plant of which 70 considered to have been used during the passion are presented in different European cities as authentic, a large nail and also a 9.5-inch piece of wood of the cross, including a mortise joint consistent with it having been part of the crossbar.

Both the nail and the wood are now presented at the veneration of the holy crown in Paris but remain on the central altar during the ceremony.

St. Louis is known to have distributed the thorns of the holy crown as presents for other heads of state and religious dignitaries.

Together with his brother, Louis IX divested himself of his kingly garments and wearing a simple tunic accompanied the relics on their way to Paris. Taking off his shoes, he carried the crown barefoot all the way to Notre Dame de Paris.

He then decided to build a monumental reliquary where all the relics of the passion would be kept. It became the beautiful “Sainte Chapelle,” an extraordinary Gothic sanctuary that can be visited inside the present “Palais de justice” close to Notre Dame.

With the troubles of the 1789 Revolution, the relics were removed from their sanctuary, deposed in the Basilica of Saint-Denis and then transferred to the National Library. Thanks to officials who still had Christian feelings left, they were kept unharmed and later restored to the archbishop of Paris in 1804 after the Concordat between the Catholic Church and Napoleon in 1801. In 1806, they were placed in the Treasure of Notre Dame, where they remain.

For anyone planning to venerate the holy crown of thorns, arrive early at the Cathedral Place because the line to enter is usually quite long and go to the upper part of the nave. Entrance is free and all who indicate they have come to pray can join the ceremony.