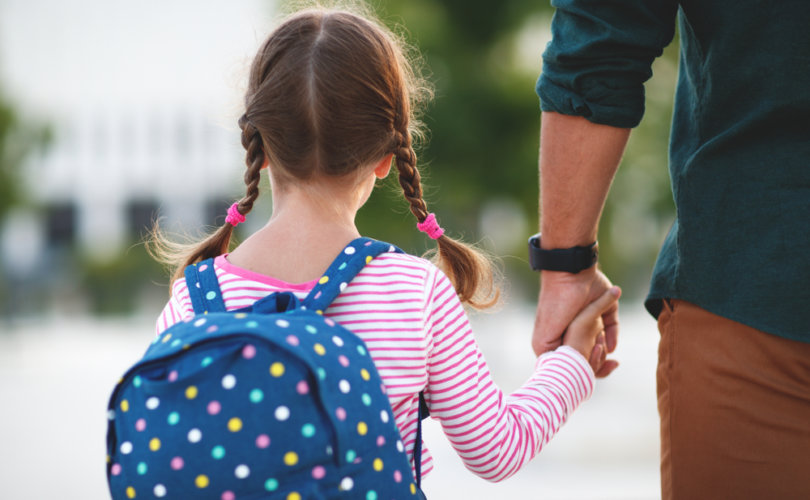 August 13, 2019 (LifeSiteNews) – Over the past several years of writing on the subject of the transgender phenomenon, I’ve received many phone calls and emails from despairing parents. The details are always different, but the stories are always very much the same: Their child, often struggling with body image issues, autism, or mental illness, was persuaded by peers and the public school establishment that he or she—usually she—was transgender. Other possibilities are almost always rejected, and often the parents face threats from the school authorities or social services for not being “affirming” enough of their child’s desire to switch genders. The results are always heartbreaking.

One recent example was detailed this month in USA Today by Jay Keck, a suburban dad who lives just outside of Chicago. His nightmare began in April of 2016, when his 14-year-old daughter became convinced that she was in fact a boy—with the staff of the public school in Hinsdale District #86 emphatically endorsing this delusion and opposing Keck’s attempts to help his daughter every step of the way. In fact, the teenage girl, who had shown no indication of gender dysphoria or a desire to be male throughout her childhood, is on the autism spectrum—a fact her school ignored when she declared herself to be transgender after beginning to hang out with another girl who professed to be a “boy” trapped in a female body.

Keck’s daughter chose a male name, and the school staff—“who had full knowledge of her mental health challenges”—began using that name without telling either Keck or his wife. They began to treat the teenage girl as a male, referring to her as “he” and “him,” and when her parents finally discovered what was going on and requested that their daughter be referred to by her legal name, they ignored their wishes. When challenged, the assistant superintendent of the school district claimed that this was because they were simply following the law, but as Keck pointed out, there was no such law, only a 2016 directive from the Obama administration “that said schools need to officially affirm transgender students”—guidelines that were blocked by a judge that same year and rolled back by the Trump administration in 2017.

Things soon got even worse. As Keck described it:

My daughter told me that the school social worker was advising her about halfway houses because he thought we did not support her. The social worker confirmed this when I scheduled a meeting with him to discuss it. This felt like a horrifying attempt to encourage our daughter to run away from home.

We had our daughter evaluated by a psychologist approved by the school district. He told us that it was very clear that our daughter’s sudden transgender identity was driven by her underlying mental health conditions, but would only share his thoughts off the record because he feared the potential backlash he would receive. In the report he submitted to us and the school, he did not include these concerns that he would only share in person.

In my attempts over the past several years to get help for my daughter, what I have learned has shocked me.

The National Education Association has partnered with the Human Rights Campaign and other groups to produce materials advocating automatic affirmation of identities, name changes and pronouns, regardless of parents’ concerns. In 18 states and the District of Columbia, including in my home state of Illinois, there are “conversion therapy” bans, which prevent therapists from questioning a child’s gender identity. No wonder my daughter’s therapist would only speak to me off the record.

Some agencies, like the New Jersey Department of Education, warn school districts to “be mindful of disputes” between children and their parents over gender identity. The department's “Transgender Student Guidance” document refers educators to the state’s “Child Abuse, Neglect, and Missing Children” webpage, suggesting that school staff might be encouraged to report parents if they disagree with their child transitioning.

In short: the introduction of transgender curriculum in public schools is quite literally resulting in the recruitment of children to the transgender cause, introducing confusion that is having predictable but devastating effects. Parents are often afraid to speak out, and professionals often decline to state their actual analysis on the record for fear of being attacked by the LGBT mob. As a result children and teenagers are being given so-called “treatments” that are blocking puberty—and some are even getting mastectomies and orchiectomies (which consist of the surgical removal of the testicles.) The results are irreversible.

School officials are determined to cut parents who are desperate to help their children out of the equation—when Keck and his wife requested that her legal name be used at graduation, the school rejected this and used a male name, instead.

“Now, thanks in large part to my daughter’s school, my daughter is more convinced than ever that she is a boy and that testosterone may be necessary for her to become her authentic self,” Keck wrote. “She turned 18 in late June and life-altering, dangerous testosterone injections are just one ‘informed consent form’ away. She can turn to any one of Illinois’s 17 Planned Parenthood clinics for cheap and easy access. No extensive mental health assessment will be required, and there will be nothing I can do to stop her.”

I’ve said this before, and I’ll say it again: The transgender phenomenon is destroying children and teens, and there will be much suffering in the years ahead as boys and girls grow up to grapple with the permanent decisions that adults are facilitating and enabling. In the meantime, if your children are in public school, pull them out—now. You won’t regret it. Our public schools are now the ground zero of a grand cultural experiment, and children are the guinea pigs. Make sure that your children are safe.

Jonathon’s new podcast, The Van Maren Show, is dedicated to telling the stories of the pro-life and pro-family movement. In his latest episode, he interviews Kristen Jenson, founder of Protect Young Minds who works to help parents porn-proof their homes and their children. Jenson is the author of Good Pictures, Bad Pictures: Porn-Proofing Today’s Young Kids. You can subscribe here and listen to the episode below: