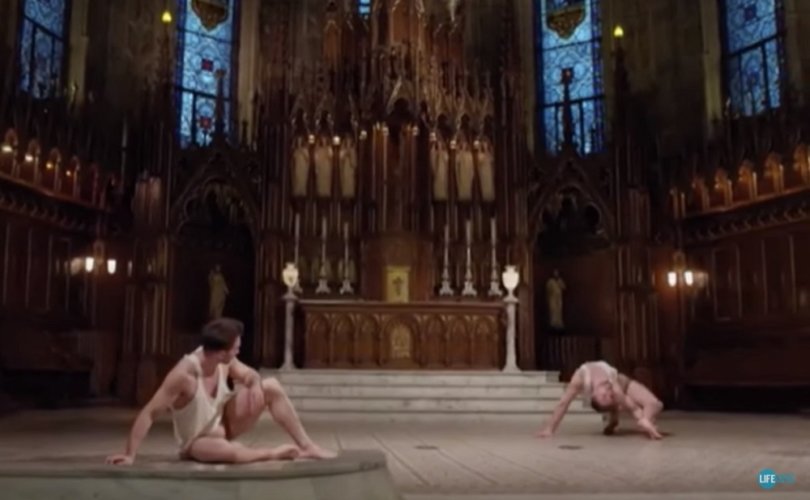 WARNING: The following article and video contain disturbing content and show a sacrilegious event inside a Catholic church.

The two dancers perform to Jeff Buckley’s sexualized adaptation of the song “Hallelujah” by Leonard Cohen, according to gloria.tv, which first called attention to the disturbing three-minute video.

“The hallelujah is not an homage to a worshipped person, idol or god,” Buckley explained to the Dutch magazine OOR, “but the hallelujah of the orgasm,” noted the gloria.tv report.

The most disturbing scene in the video comes in its final seconds, as the camera zooms in on the hands of two male dancers, imitating Michelangelo’s famous depiction of the creation of Adam, as the hands of God and man touch.

This appalling mockery replaces immutable Scriptural truth with a narcissistic gay interpretation that places perverse passion between men above God’s love for humankind.

“I wanted to push the Hallelujah deep into the secular world, into the ordinary world,” composer Cohen once said.

“He’s rescued the word hallelujah from being just a religious word,” said the Right Reverend Nick Baines, Bishop of Croydon, in a BBC radio documentary, according to a 2012 Rolling Stone article. “We’re broken human beings, all of us, so stop pretending, and we can all use the word hallelujah because what it comes from is being open and transparent before God and the world and saying, ‘This is how it is, mate.’”

Following the David and Bathsheba reference, the sexuality of the lyrics is drawn further forward and then reinforced in an image of torture and lust taken from the story of Samson and Delilah – “She tied you to a kitchen chair / she broke your throne, she cut your hair” – before resolving with a vision of sexual release: “and from your lips she drew the Hallelujah!”

“This world is full of conflicts and full of things that cannot be reconciled,” Cohen has said, “but there are moments when we can transcend the dualistic system and reconcile and embrace the whole mess, and that’s what I mean by ‘Hallelujah.’ That regardless of what the impossibility of the situation is, there is a moment when you open your mouth and you throw open your arms and you embrace the thing and you just say, ‘Hallelujah! Blessed is the name.’…

“The only moment that you can live here comfortably in these absolutely irreconcilable conflicts is in this moment when you embrace it all and you say, ‘Look, I don’t understand a f***ing thing at all – Hallelujah!’ That’s the only moment that we live here fully as human beings.”

And as the song “rescues” the exclamation “Hallelujah!” from being a declaration of praise, the male pas de deux performed in the sanctuary is a defiant act “rescuing” the sacred space from the presence of Christ.

Please watch at least a portion of the video below, in order to understand what is happening within the Catholic Church:

What is seen on the surface is disturbing enough, but to peer into the truest meaning of this performance is to catch a horrifying glimpse of what God sees in the hearts of many of his priests.

At its deepest level, this is an expression of the depravity of the homosexual elite inhabiting both the Church hierarchy and the Church’s vast clerical bureaucracy.

God is letting us see this so that our eyes might be opened, that we might perceive and understand the extent and the gravity of the relentless homosexual offense toward him.

For the homosexualists occupying the ranks of the priesthood, worship of the Triune God is secondary to idolizing the male body. Their first love is not for the Mass: It is for sodomy.

And so through this video, God has allowed “what has been spoken in darkness” to be “shouted from the rooftops” (Luke 12:3).

This video brings into sharp focus what St. Paul warned us about long ago:

God gave them up to degrading passions . . . men, giving up natural intercourse with women, were consumed with passion for one another. Men committed shameless acts with men. (Romans 1:26-27)

The dance takes place in the sanctuary – before the altar, before the tabernacle – declaring to the world a passion that burns not for Jesus Christ, but for perverse sexual “intimacy” between men.

In a sense, the video was unavoidable. It had to happen. Why?

Because those to whom the Church is entrusted have not come completely clean on homosexuality among priests and prelates, despite a barrage of red flags being waved for all the world to see:

God has permitted this video, so that we might understand that homosexual priests and prelates are not men dealing with a little after-hours/off-duty problem with custody of their thoughts.

No. This video is a graphic expression of what God himself sees in the hearts and minds of so many men occupying Church sanctuaries around the world as they sacrilegiously offer the Holy Sacrifice of the Mass.