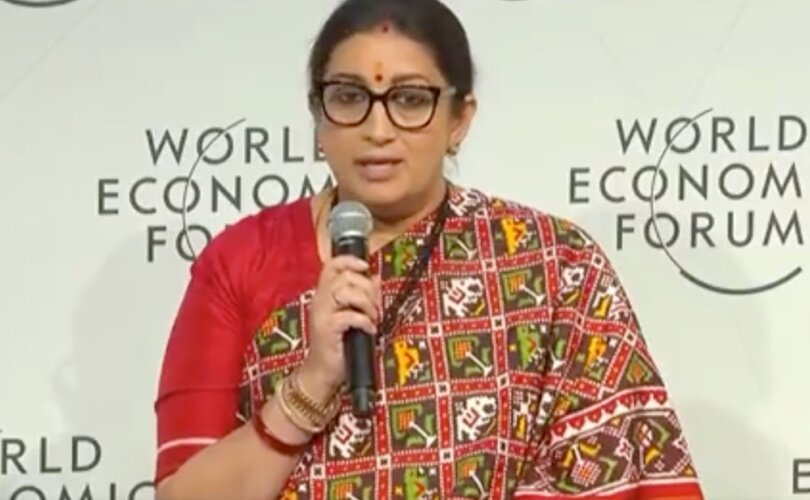 DAVOS, Switzerland (LifeSiteNews) — On Day 2 of the globalist World Economic Forum’s (WEF) meeting in Davos, “access to abortion” was a key issue.

“[Narenda Modi] is the first prime minister in India who passed in both houses of parliament medical termination of pregnancy for 24 weeks for women, without a whimper or noise from any other man in Indian politics,” India’s Family Minister for Women and Child Development Smriti Irani proudly proclaimed Tuesday during a panel discussion titled “Gender Parity for Economic Recovery.”

Abortion is a big part of the WEF Globalist agenda:

“Termination of pregnancy” and “reproductive health” were among the euphemisms used in the discussion to describe the killing of the unborn.

The Nigerian Minister of Finance Zainab Shamsuna Ahmed, who was also part of the panel, mentioned the use of digital IDs in the African country to “bring women into the banking systems.” The Nigerian government has been at the forefront when it comes to pushing Central Bank Digital Currency (CBDC) and digital identities on its citizens.

RELATED: The Central Bank of Nigeria wants to link its central bank digital currency to a digital ID system

Furthermore, Gabriela Bucher, Executive Director of the pro-abortion, pro-contraception charity Oxfam International, included the usual “woke,” neo-Marxist talking points in her statement. Bucher advocated for a “wealth tax” and called it a “feminist concept,” because “most of the billionaires, as you know, they are mostly white men and that is actually the system that is patriarchal, neocolonial, and perpetrates this inequality.”

This is certainly an interesting statement to make at a conference organized and supported by many of these “patriarchal, neocolonial” billionaires and their closest allies.

Naturally, the panelists never talked about women being happy or fulfilled; rather, the focus was solely on women entering the workforce and increasing the number of women in management positions. We have to “use more women in the labor market,” economist Ilan Goldfajn said.

Of course, it is beneficial for corporations to advocate for contraception and abortion, so women stay in the workforce and keep paying taxes to the government instead of having children and raising them at home.

Around noon there were several special addresses by high-ranking politicians, including EU Commission president Ursula von der Leyen. The German politician prophesied “the next decades will see the greatest industrial transformation of our times, maybe of any time.”

NOW – Ursula von der Leyen at WEF: “The next decades will see the greatest industrial transformation of our times, maybe of any time.” pic.twitter.com/k7l8L3J4zn

This transformation will happen due to efforts to achieve the goal of “Net Zero” carbon emissions by the year 2050, according to the head of the EU Commission. Von der Leyen talked about the EU’s “Green deal industrial plan,” which includes the transition to so-called “green energy” sources, banning the sale of gas-powered cars, and introducing carbon taxes.

A key portion of the overarching globalist agenda is the promotion, acceptance, and actioning of the UN’s 2030 Sustainable Development Goals (SDG), which are pro-abortion and heavily promote a green agenda “to combat climate change.” This is  outlined by the United Nations themselves when promoting their pro-abortion 2030 Agenda, “Gender equality lies at the heart of the 2030 Agenda.”

The SDG agenda was on full display at the WEF during another panel discussion titled “Economics of Women’s Health.” Fittingly, two of the panelists, Natalia Kanem, the executive of the pro-population control U.N. Population Fund, and Mark Suzman, CEO of the infamous, pro-abortion Bill & Melinda Gates Foundation, even wore the SDG lapel pins for everyone to see.

Moderator Helen Clark lamented the fact that the COVID-19 pandemic led to “setbacks” in reaching the SDG and “gender equality,” which includes access to “reproductive health,” i.e., contraception and abortion.

Clark briefly talked about the WEF’s “women’s health initiative,” a project by the globalist organization that also pushes abortion and contraception under the guise of “reproductive health.”

The CEO of the pharmaceutical company Organon, Kevin Ali, mentioned the problem of population collapse in many countries due to low birth rates, particularly in South Korea and China. He said that the problem was not easy to fix, even though the possibility of in vitro fertilization (IVF) was available.

Suzman proudly talked about how closely the Bill & Melinda Gates Foundation works with the U.N. population program to make “injectable contraceptives” available to people around the world.

READ: Follow the money: These groups are funded by Bill Gates’s obsession with ‘global health’

Today’s events at the WEF showed that behind all the euphemisms and globalist talking points lies a deadly agenda that is aimed at the weakest in society, especially the unborn children in the womb.