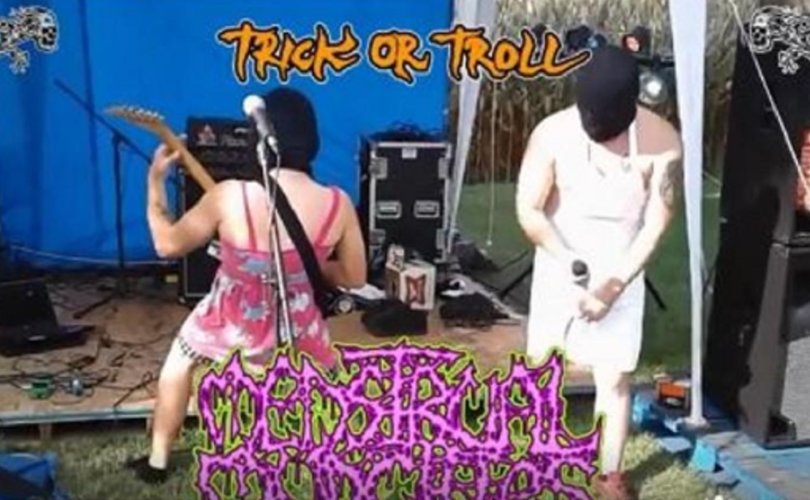 August 7, 2019 (LifeSiteNews) –– Reports have emerged that Dayton mass murderer Connor Betts — who killed nine people and injured dozens of others in a shooting rampage outside a bar — was the lead singer of a “pornogrind” death metal band that performed horrific songs about “rape, murder, necrophilia and other gruesome acts against women.”

Betts’s band called itself “Menstrual Munchies” and was known to wear Antifa masks and dresses while performing songs with “sexually violent, death-obsessed lyrics and dehumanizing imagery depicting women,” according to Vice News.

The Dayton, Ohio mass shooter was a member of a death metal band called ‘Menstrual Munchies’ and was pictured during one on-stage performance in an Antifa mask and a woman’s dress.https://t.co/yEhralj1Ig

Among the album titles released by the band is 6 Ways of Female Butchery. Others are too graphic to print here.

The album covers reportedly depicted gruesome scenes including the rape and massacre of female bodies.

“One album cover shows a woman consuming feces, while another shows an illustration of a young woman’s headless body chained to a bed, covered in blood, as a man puts his pants back on,” according to BuzzFeed.

“The mainstream media is finally beginning to acknowledge that Connor Betts was a far-left extremist who expressed support for the anti-ICE terrorist, Antifa and the presidential candidacy of Elizabeth Warren, as well as retweeting numerous left-wing personalities and news outlets,” reported Joseph Paul Watson for Summit News.

By late Monday night, CNN admitted in a tweet, “A Twitter account that appears to belong to the Dayton gunman re-tweeted extreme left-wing posts as well as tweets supporting violent protest group Antifa.”

“While much media attention has been focused on what websites radicalized the El Paso shooter,” continued Watson, “little interest has been shown in uncovering Betts’ true motive.”

“I want socialism, and I’ll not wait for the idiots to finally come round to understanding,” reads one tweet from the account, according to Newsweek.

“Pornogrind is a subgenre of a fast and extreme kind of heavy metal called grindcore, which is known for its mostly dark, satirical themes of sexual violence and gore delivered for shock value,” according to the BuzzFeed report.

That sexual violence is directed solely toward women.

One tweet from another metal band described Betts as “another dime a dozen Ohio grind dude who caped progressive politics while treating women like s—.”

Men who read pro-homosexual and pro-transgender books to young children while attired in flamboyant feminine clothing with their faces plastered in heavy, garish feminizing make-up do not celebrate or admire femininity; they mock and denegrate it.

The dark misogyny that compelled the Ohio shooter’s band is not very different from that which compels the men now conducting DQSH in public libraries across the country.

DQSH is not about increasing tolerance; it’s about demeaning womanhood.

“They are grotesque hypersexualized caricatures of women. They mock women and debase our womanhood and femininity. A drag queen is no different than a racist donning black face,” continued Bohac.

“The library hosting such an event teaches our sons that women are just sexual objects and it teaches our daughters that they must be overly sexualized to be desired. Enough is enough,” she added.

“Drag Queen Story Hour” and “pornogrind” death metal music both come from the same dark place in the hearts of men untethered from reality, who reject half the human race.