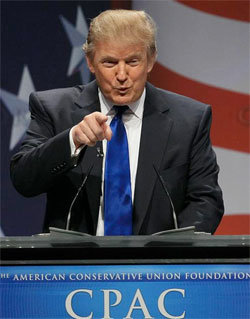 Calling people a string of adolescent names and refusing to avail yourself of basic manners is not 'truth telling,' it’s buffoonery.

Arguably the single most disturbing incident during the recent Republican primary debate went unnoticed by most. Fox News host Megyn Kelly asked reality show star and business tycoon Donald Trump about his habit of consistently denigrating women who disagree with him by calling them names, including calling one woman a “dog.” “Only Rosie O’Donnell,” Trump replied. And to the shame of the audience, a roar of applause went up that lasted painfully long.

I originally thought that Trump could be ignored. Surely, no one could tolerate that type of behavior from someone who wanted to be president of the United States for long. But his numbers keep going up, and conservative commentators such as Rush Limbaugh and Sean Hannity are climbing into the Trump clown car. After Trump released his immigration plan, conservative media darling Ann Coulter even tweeted, “I don’t care if Donald Trump wants to perform abortions in the White House after this immigration policy paper.”

I’m as frustrated by political correctness as anyone else. As a full-time pro-life activist, I’m faced with it and bogged down by it on a daily basis. But are we actually at a point where our principles allow us to cheer wildly at the sight of a rude and ungallant businessman referring to a woman as a “dog” just because that woman has said vile and repulsive things herself? As anti-porn activist Matt Fradd has noted, it is a manly thing to treat a woman with dignity, even if she has forgotten hers.

But the comments went virtually unnoticed—except for the enormous backlash against Megyn Kelly for having the audacity to ask a man who regularly swaps out his wives for younger women and has a habit of calling women names a very legitimate question. Not to mention his other statements that are as creepy as they are indicative, like his comment, “I don’t think my daughter Ivanka would pose for Playboy, although she does have a very nice figure. I’ve said if Ivanka weren’t my daughter, perhaps I would be dating her.”

I wrote a number of these things in another column recently, and was unsurprised to find that plenty of conservatives disagreed with my analysis of Trump. For some reason, some conservatives think they can talk about how dignity, honesty, and integrity belong in the White House, and then in the same breath support The Donald.

But he’s a “truth teller”! insist his supporters. No, he’s not. Calling people a string of adolescent names and refusing to avail yourself of basic manners is not “truth telling,” it’s buffoonery. Being rude and crude isn’t “defying political correctness,” it’s just being rude and crude. You can tell the truth without sounding like a drunk teenager. And being a misogynist isn’t anti-feminist, it’s anti-feminine.

In short: Donald Trump is to presidential politics what Family Guy is to animated cartoons.

It seems that the radical feminists and secular leftists have done such a good job of stigmatizing concepts like chivalry and the idea that men should treat women gallantly that even some conservatives have bought into it. We should be engaging in a real discussion about their worldview versus ours, rather than ceding defeat by descending into a bare-knuckle brawl where they call us misogynist pigs, and we prove them right.

Does Rosie O’Donnell say disgusting things? Absolutely. Does that give us an excuse to call her a “dog,” or any other name for that matter? I would hope that the worldview we’re trying to hold up contrasts with the crude behavior of modern feminists. Trump is inviting us all to climb down into the gutter and fire back. It makes me feel a bit nauseated that so many conservatives seem to be taking him up on his invitation.

As I was discussing this with one of my friends, she pointed me towards some Facebook comments the brilliant historian Eric Metaxas wrote on Facebook regarding Trump. His comments are a wonderful blast of fresh air amid all of the Trump apologists:

Donald Trump's despicable comments about Megyn Kelly are God's mercy toward the U.S. We've been allowed to see the madness of Saul in time to reject him. If anything has ever illustrated our debased view of manhood…Donald Trump is it. He is not gentlemanly or chivalrous or heroic. He is a win-at-all-costs Saul who would mesmerize us for a time and lift our hopes, only to destroy us in the end. His viciously nasty comments toward Rosie O'Donnell were not what a gentleman says about a woman, no matter who she is or what awful things SHE has said. A gentleman would never have stooped to that level. Would George Washington or Abraham Lincoln speak about a woman that way? We've fallen very far that we would tolerate this behavior.

That, I think, is how a Christian and a real conservative responds to a man who takes the national stage and says horrible things about women. Those who are defending Trump by saying that those on the left (where Trump himself oh-so-recently resided) say things about us that are much worse are missing the point, not to mention ignoring the “turn the other cheek” admonishment.

When we respond to vulgarity with vulgarity, our opponents win the argument. And when we howl our approval at a billionaire calling a woman a “dog,” we cannot claim, in any sane or rational way, to be consistent with any principles.