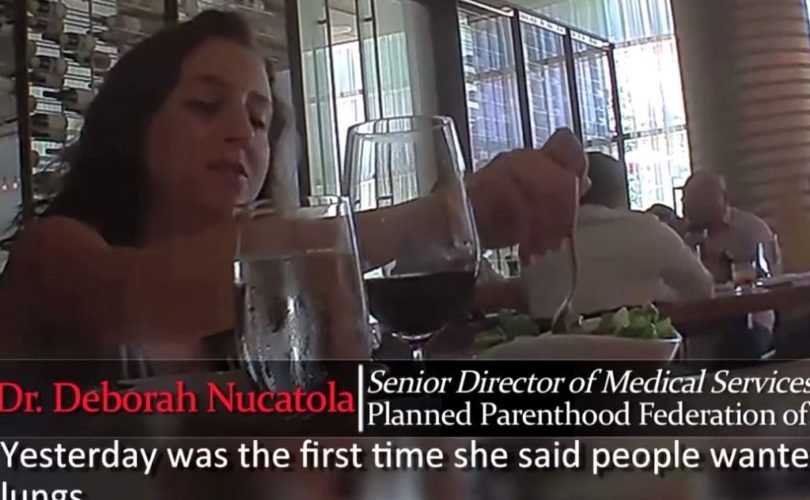 I watched the video put out with your face on it. I heard you talking about harvesting fetal body parts. I saw you sip your wine while talking about how to remove an intact fetus.

I want you to know that I’m not disgusted by you. I’m not disgusted, because I used to be just like you. You see, my former Planned Parenthood clinic used to harvest fetal body parts. I used to sift through their bodies and prepare them for transport to the research lab we were contracted with.

The other day, I learned a new thing that I hate because of my work at the clinic. Dry ice. We used to participate in studies where we would have to collect fetal body parts and ship them to research labs…all for stem cell research. We kept their little bodies cold and preserved by using dry ice. My daughter was really excited to put water on it so she could see the smoke. I stood there and couldn't get the memories of those little bodies out of my mind. My kids were squealing with excitement and I felt like I couldn't move. I had to make a decision in that moment. I could either let my past consume me, or I could repurpose that memory and use it for good. And that’s what I chose to do. I sat down next to the block of ice and watched my kids run around in the smoke.

But that dry ice did cause me to recall that particular part of my work. All of the blood, body parts and extra tissue would be collected into a glass jar. That glass jar would come to me in the POC (products of conception) lab through a “pass through specimen cabinet.” I would take the jar to our sink, dump everything into a huge strainer, rinse out the jar and then rinse the blood out of the strainer. After I had a clean body, I would dump it into the glass baking dish that was sitting on top of an x-ray light box. I would put a little bit of water in the glass dish so that the body parts would float…that made it easier for me to manipulate them.

During the season of tissue harvesting, an intact body was gold. An intact fetal body is considered perfection in the land of fetal tissue research. But dismembered body parts were okay, too…and that is usually what we gave them. I would check the patient’s chart to make sure that they had signed the consent for us to donate their baby’s remains. Almost every woman did, because we made it seem like that by donating, they were helping others…altruism during abortion. If she had consented, then I would gather the parts wanted (usually all of them) and place them in a particular container given to us by the research company. At the end of the day, I would pack all of the containers neatly in the box with dry ice and ship them off.

That was my life, and I did it for eight years. The images of tiny bodies will always be burned in my memory. And in a strange way, I am thankful for that memory as it reminds me what I’m fighting for.

As I watched you on the video, I could almost see myself. After a grueling abortion day, we would all go out for margaritas and Mexican food. We would talk about the day and specific abortion cases. It wasn’t gross to us. We honestly didn’t think anything about it. We would plainly talk about harvesting fetal parts as if we were talking about harvesting a field of corn. That was our normal…and we were proud to live in it. I get the humor. I get how something grotesque to others can seem ordinary.

I understand the world you live in. I understand the blindness. I don’t think you are an evil person. I wasn’t an evil person. But just like I was, you are gravely misguided. I want you to know that I care about you. I have seen the things being said about you. I have seen the hate and vile comments about you. Seeing those things being said about you is honestly heartbreaking for me. I can’t imagine what you are feeling right now. I understand how hurtful people can be. I still receive comments like that sometimes.

But I am not one of those people. And no one involved in our organization, And Then There Were None, sees you as an evil person. We care about you. We want you to find peace. We want you to find true happiness. We know that won’t happen as long as you are involved in Planned Parenthood. We believe that your life matters. We believe that your life holds infinite value and worth. You matter to us. As hard as I fight to save unborn babies, I fight just as hard to save people like you from the grips of the abortion industry.

You can leave. We can help you. I hope you watch this video and see that we are a safe place for you to turn. Call me today at 888-570-5501 or email me directly at [email protected].

You can change your life.