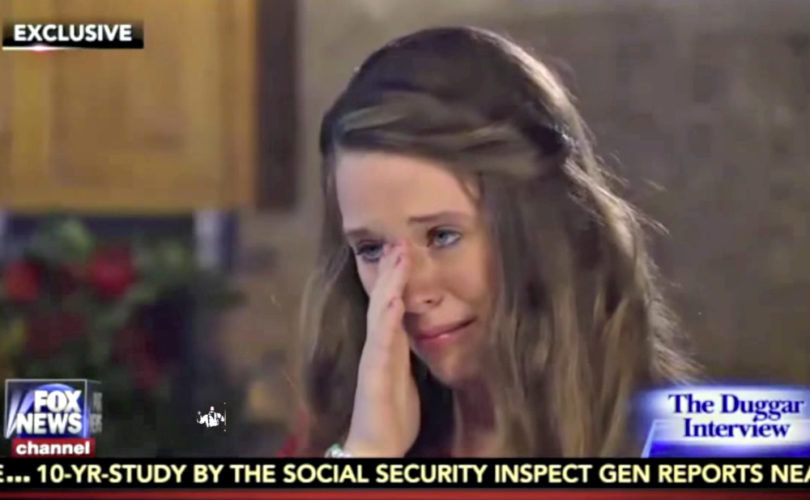 For the past two weeks, barrels of ink have been spilled analyzing every sordid detail of the Josh Duggar molestation scandal, but, strangely enough, almost none on the other scandal, the one that, in the words of two of Josh’s victims, was “1,000 times worse”: namely, the release, publication, distortion, and sensationalizing of their story for profit…or worse.

You would have thought that Megyn Kelly’s in-depth interview with Jessa and Jill Duggar on Friday would have given the Duggars’ critics pause. That it apparently has not is the clearest indicator that solicitude for the victims has never been the driving force behind this story – notwithstanding the many tearful protestations of sympathy for “those poor girls.”

Until now, those few who have dared raise questions about the dubious ethics and legality of the release and publication of Josh’s sealed juvenile records, and, more egregiously, the public identification of his minor victims, have been silenced by accusations of “enabling” sexual abusers, minimizing child molestation and the suffering of Josh’s victims, and seeking to protect the Duggar family in the name of technicalities.

But it’s hard to see how these justifications in the guise of moral outrage can survive the testimony of those “poor girls” themselves – a clear, confident, and convincing testimony of parents who responded openly and effectively to the abuse, of a perpetrator who repented, received counseling and has not re-offended, of victims who chose to re-establish trust with and to forgive their abuser, and have healed, and of a family that has been able to put a painful chapter in their history behind them.

A testimony, above all, as the sisters made clear, of victims who have had a 12-year-old wound wantonly ripped open and the most intimate details of their pain spilled out on the front pages of tabloids for the world’s entertainment. And all of this in clear violation of every journalistic and legal standard designed to protect juvenile and victims' rights, and with the dubious justification of “protecting” the victims.

“They definitely don't have the victims in mind,” retorts Jessa. “People say 'I feel for the girls' but they don't, because if they did they would respect our wish for this to remain private.”

“A system that was set up to protect kids, both those who make stupid mistakes or have problems like this in their lives and the ones that are affected by those choices, it's just – it's greatly failed,” she added.

When asked by Kelly how she felt when she first heard that their story was to be featured on the cover of InTouch magazine, Jill responded, bursting into tears (the only time either girl wept the whole interview): “I could not believe what was going on. I said, 'What right do you have to do this?' We're victims. They can't do this to us.”

Now, with the useful narrative of the oppressed and voiceless victims trapped in a “House of Horrors” crumbling beneath the victims’ own testimony, the response has been, shamefully, to discredit Jessa and Jill as victims.

“This is like watching Scientology defend itself,” Tweeted media personality Montel Williams as the girls’ interview aired on Fox. His tweet was in turn republished on Salon.com under the headline “The one perfect tweet which put Megyn Kelly’s new Duggar interview in context.” Others have accused the girls of being “brainwashed,” and of following the family “narrative” in order to protect the income from their TV show.

In other words: Dear victims, You’re liars. You say the media has distorted the truth, but we know better than you what you have suffered, and how you ought to feel about it. You say you have healed; but we say that you do not have the right to heal. You say you have forgiven your brother and love him; but we say that your brother does not have the right to be forgiven or to be loved. You say the exploitation in the tabloids has been more painful than the original abuse: we say you deserve it.

I believe there's a name for that: it's called victim-blaming.

Many of the responses to Jessa and Jill's interview calls to mind this rather biting quotation by C.S. Lewis:

Suppose one reads a story of filthy atrocities in the paper. Then suppose that something turns up suggesting that the story might not be quite true, or not quite so bad as it was made out. Is one's first feeling, 'Thank God, even they aren't quite so bad as that,' or is it a feeling of disappointment, and even a determination to cling to the first story for the sheer pleasure of thinking your enemies are as bad as possible? If it is the second then it is, I am afraid, the first step in a process which, if followed to the end, will make us into devils. You see, one is beginning to wish that black was a little blacker. If we give that wish its head, later on we shall wish to see grey as black, and then to see white itself as black. Finally we shall insist on seeing everything — God and our friends and ourselves included — as bad, and not be able to stop doing it: we shall be fixed for ever in a universe of pure hatred.

Let us be clear: It’s not that Josh’s crimes were not horrific (the sisters were very clear that what he did was evil and inexcusable). And it’s not that there may not be room for criticizing certain aspects of and learning important lessons from Jim-Bob or Michelle’s handling of the case. But when our reaction to the pleas from the victims themselves to respect their legal right to privacy, and to explain that they were not “scarred for life,” that they have received counseling, healed, forgiven, and put the past behind them, is outrage, then the time has come to ask ourselves what, precisely, is fueling this anger of ours.

In some cases, this anger perhaps stems from our own personal wounds: for many of us are deeply wounded when it comes to matters of sexuality, and this emotional case may have understandably touched those wounds. In others, however, it is quite transparently the desire for blood. But in either case, it is obviously time to stop pretending that it is borne of concern for the victims. In their interview on Friday, Jessa and Jill firmly took that fig leaf away from us.

Duggar sisters: Tabloids exploiting our story ‘a thousand times worse’ than what Josh did