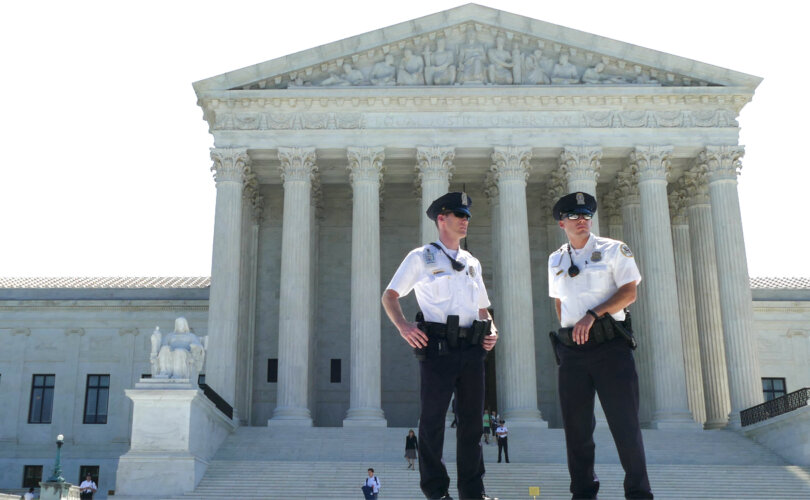 Outside the U.S. Supreme Court during the Obergefell v Hodges oral argumentsDoug Mainwaring

(LifeSiteNews) — Arguments focusing on religious liberty to amend or fend off the so-called “Respect for Marriage Act” (RFMA) are way off the mark, tantamount to raising a white flag, signaling yet another defeat for the immutable definition of marriage, the nuclear family, and timeless –– accurate –– definitions of man and woman.

Arguing for religious liberty carve outs is not a bad thing, but it’s not the best thing and it certainly isn’t a strategy that aims to regain vast swaths of territory ceded to politically correct Wokeism.  Doing so indicates demoralized resignation to the utterly impossible notion of same-sex marriage established by the Supreme Court’s 2015 Obergefell decision.

There is no rationale –– NONE –– for acknowledging or surrendering to a law that enshrines something that is not real, that does not actually exist, and can never come to be. Same-sex marriage is an illusion, a grand pretension perpetrated on an immense scale, which must be dealt with accordingly.

The goal of conservatives on Capitol Hill should not be to stave off RFMA, but to focus energy and resources on striving for the ultimate good: Overturning Obergefell and then restoring the indisputable, immutable definition of marriage state by state.

Republicans and anyone else they can get on board need to wage war against the lies upon which Obergefell was decided instead of sheepishly pleading for pathetic carve outs.

“Today’s Senate vote does not change the nature of marriage. It tells a falsehood about what marriage is,” said Andrew T. Walker, Ethics Professor at Southern Baptist Theological Seminary and fellow at the Ethics and Public Policy Center following Tuesday’s passage of the RFMA in the upper chamber.

“I … reject the entire premise that when we talk about [RFMA] we immediately hop into the defensive posture of religious liberty,” announced Newsweek opinion editor Josh Hammer in a recent NatCon Squad podcast.

Hammer said that the American right lost on same-sex marriage politically and juris prudentially because “we had so few people willing to actually make the affirmative, positive case for what marriage is: The permanent, exclusive, monogamous union of one man and one woman.”

“Let’s not immediately dive into religious liberty discussion. Let’s not necessarily forsake the affirmative case for marriage as one man and one woman” urged Hammer, “because that actually is the best and correct definition of marriage for families, for society, and for the country at large.”

“No matter how hard progressives try to deny it, marriage is the irreplaceable foundation for stable societies,” wrote William Wolfe, Deputy Assistant Secretary of Defense at the Pentagon and a Director of Legislative Affairs at the Department of State in the Trump Administration. “Not just any ‘marriage’ but marriage marriage: One man joining with one woman in a permanent, monogamous, committed union and dedicated to caring for any offspring such a union may produce.”

“Marriage deserves our full-throated support, based on the simple facts alone,” he continued. “Our efforts now must be focused on rebuilding our indispensable institutions — and there is none more vital than marriage and the family.”

The problem is that almost nobody on Capitol Hill wants to stand up for the immutable definition of marriage, including at last count, 47 Republicans in the U.S. House and 12 in the Senate, who don’t want to risk offending homosexuals or appear uncaring.

Republican Party leaders are presiding over the continued incremental demise of the immutable definition of marriage rather than leading the charge to restore it and encourage its flourishing.  Without a serious course change, “marriage” as we know it will be devoid of meaning.

“We can disagree with Supreme Court decisions, but we can’t disobey them,” said former Vice President Mike Pence in an interview with CBS News’ Face the Nation regarding RFMA.

“I respect the pronouncements of the Court,” said Pence, declaring complete capitulation to one of the most egregious rulings ever issued by the U.S. Supreme Court.

“States and the Federal government can and surely will continue to recognize the validity of same-sex marriages,” said Utah Sen. Mike Lee in a speech promoting his religious liberty amendment to his colleagues while accidentally acknowledging the weakness of the religious liberty argument: Genderless, non-conjugal, non-complimentary “marriage” cannot legitimately be described as “valid.”

Pence’s and Lee’s comments are not that much different from those of David French, senior editor of The Dispatch and a contributing writer for The Atlantic, who came under fire by one critic for being “far more concerned with minimizing division, rather than for Christian advocacy of the good, the beautiful and the true.”

“Millions of Americans have formed families and live their lives in deep reliance on Obergefell being good law. It would be profoundly disruptive and unjust to rip out the legal superstructure around which they’ve ordered their lives,” asserted French, who now ranks secular pluralism above establishing law and cultural practices that best lead to human flourishing.

“French’s reasoning seemed to entirely confine his concerns to mitigating competing interests between same-sex couples who want to get married and religious freedom protections,” observed Cory Higdon, professor of history and humanities at Boyce College. “But this purely pragmatic concern fails to wrestle with the profound moral and ethical issues involved in a society signaling that same-sex marriage is good.”

“In a stunning admission, French called a society willing to recapture a natural understanding of the family ‘unjust,’” noted Higdon.

French is wrong. While difficulties certainly would be encountered in untangling from the legal web created by Obergefell, to do so would not be unjust.

Stop being fearful: just say ‘No’

Conservatives need to look deep within themselves and find the courage and fortitude to stand up to the cascade of lies that brought us Obergefell and which have continued since, not the least of which are the plague of transgenderism unleashed by Obergefell and the acceleration of our culture’s slide into woke neo-Marxism with almost no resistance.

True kindness must often necessitate saying ‘no.’ It therefore requires a willingness to accept conflict. Niceness avoids conflict in order to continue being liked, always taking what seems like the safest or most socially beneficial course available. Niceness thus often functions as an excuse for moral or physical cowardice.

Niceness cannot therefore be or provide for goodness. Goodness requires resistance to or even conflict with the bad. To not stand up in opposition to the wrong out of a desire to remain safe or liked is not a virtue but a moral failure. And to demand that others ‘be kind’ or nice by saying ‘yes,’ that they not rock the boat and keep things peaceable and accepting, isn’t a sign of virtue, but an exercise of power to [intentionally] enforce conformity to a lie.

As I see it, there are 3 things that must immediately begin in order to restore the definition of marriage:

1. The rights of children, not religious adults, must be front and center

“Conservatives are repeating the same failed tactics related to marriage,” averred Katy Faust, founder of Them Before Us, an organization dedicated to putting the rights of children over the desires of adults.  “Religious Americans are not the primary victims of bad marriage policy. Children are. Start making child-centric arguments against unions, arrangements, and technologies that exclude a child’s mother or father. They’re both true and persuasive.”

“No one’s interested in fighting [same-sex] marriage (or the myriad other ways the Left is redefining family) if it’s just about minimizing discomfort of religious adults,” continued Faust in a subsequent Tweet thread. “But that’s how all these conversations come across. Not exactly the approach that will fortify wobbly-kneed Senators or citizens to stand against a cultural onslaught.”

We need to give Senators (and all citizens) someone to fight FOR. That someone is not the cake-baker or the florist. That someone is children. We need to make the direct connection (which is easy) between redefining marriage and motherless/fatherless kids.

The focus can’t be on the rights of religious adults (which is clearly under attack). That tactic lost us Obergefell. It will lose us the (laughably-named) Respect For Marriage Act as well. We have to fight smart, because they’re not stopping at marriage.

2. A critical mass of the same-sex attracted must signal their permission to overturn Obergefell

We same-sex attracted Americans must raise our voices and demand that the Supreme Court’s ill-founded Obergefell ruling be overturned. Politicians, both Democrat and Republican, who are afraid of their own shadows need the political cover that only those who were the targeted beneficiaries of Obergefell can provide.

We must pave the way to restore marriage and family, to reestablish timeless principles and immutable definitions, and to reopen the public square for the proclamation of truth.

To do so requires intellectual honesty and courage.

3.  Be not afraid of engaging in the ‘war for the freedom to remain human’

“Sometimes upholding the truth of objective value must bring not peace, but a sword,” counseled N.S. Lyons at the conclusion of his lengthy essay mentioned above.

Referring to C.S. Lewis’ The Abolition of Man, Lyons said, “Saying ‘no’ in defense of the good and the true takes men with chests – and not just in the sense of having the intuition of right and wrong, either. It takes the kind of spirited assertiveness and willingness to upset others that is not associated with geldings.”

“A war is indeed coming,” he warned. “A war to defend the Normal from the Lie. A war for the freedom to remain human.”

“This and no other is the true great war in our time – and indeed it is already here. We have no choice but to muster our courage and fight it, or perish.”

God assumed from the beginning that the wise of the world would view Christians as fools and He has not been disappointed. Devout Christians are destined to be regarded as fools in modern society. We must pray for courage to endure the scorn of the sophisticated world. If I have brought any message today, it is this: Have the courage to have your wisdom regarded as stupidity. Be fools for Christ. And have the courage to suffer the contempt of the sophisticated world.