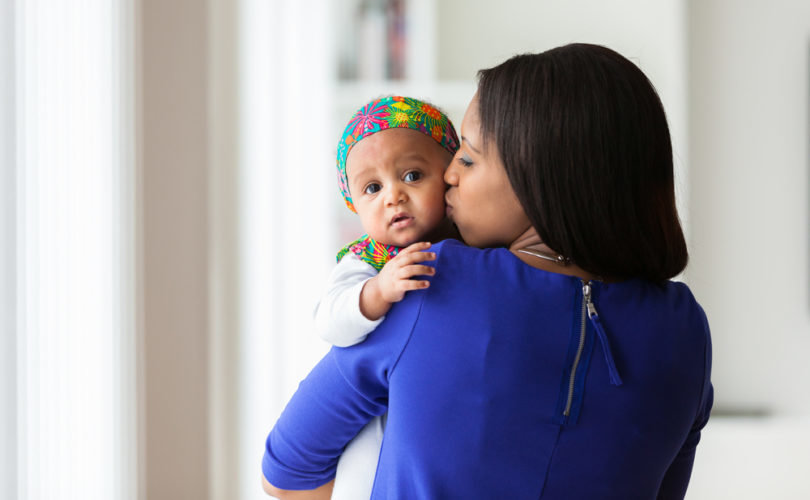 February 26, 2016 (LifeSiteNews) — Black lives matter. Or so we’re told. The left gets enraged when you put their rhetoric into context. Nationwide, #BlackLivesMatter leaders decry the tragic deaths of unarmed black lives at the hands of what is sometimes accurately called police brutality. In 2014, there were a total of 444 reported “unarmed deaths” according to the FBI (labeled as “justifiable homicides” with no racial/ethnic specifics). Yet over 330,000 deaths of unarmed black lives in the womb happen every year due to abortion brutality and this movement embraces the violence as “reproductive justice”.

Hamer, who was passionately prolife and an adoptive mother, would hammer today’s racially divisive #BlackLivesMatter movement that willingly supports the most institutionalized form of racism—population control (aka abortion).

In her denial opinion piece, “Dear conservatives: Abortion clinics don’t ‘target’ the black community”, Representative Gwen Moore (D-WI) wants to cry racism because prolifers invoke the #BlackLivesMatter hashtag to expose the movement’s blatant hypocrisy. (The Washington Post refused to publish my factual response to challenge her diatribe of lies.) Pro-life Congressman Sean Duffy (R-WI) rightfully called out the pro-abortion Congressional Black Caucus (CBC) for their silence. But the CBC and other black-led, liberal “civil rights” groups aren’t silent; they’re boldly vocal about their support of the number one killer in the black community. As an award-winning creative professional and citizen journalist, I’ve highlighted this betrayal by organizations like the CBC, the NAACP, (which I unapologetically call the National Association for the Abortion of Colored People), the National Urban League and others in our TooManyAborted.com initiative.

Dr. Mildred Jefferson (1926-2010), the first black woman to graduate from Harvard Medical School and the first woman employed as a surgeon at the Boston University Medical Center, denounced population control and its conduit, Planned Parenthood. She dedicated her life to caring for the sick and speaking globally about abortion’s violation of humanity: “I will not accept the proposition that the doctor should relinquish the role of healer to become the new social executioner. It is unconscionably unfair that the victim selected on which to test this social remedy of expendable lives, is the most defenseless member of the human family–the unborn child who cannot escape, cannot riot in the streets, cannot vote.”

Representative Moore wants to pretend that institutionalized racism isn’t inherent in a billion-dollar abortion empire that regularly celebrates its eugenicist founder. Planned Parenthood, according to its latest Annual Report, killed 323,999 [disproportionately black] human lives via abortion last year. Moore uses Planned Parenthood-funded Guttmacher to defend what is obvious to anyone living in urban America—the majority of abortion centers are located in predominantly black and Hispanic areas. Guttmacher makes the bogus claim (with zero demographic/geographic data) that 1 in 10 abortion centers are located in majority-black neighborhoods. In that same report, however, Guttmacher contradicts itself declaring “abortion services are concentrated in cities”.

Rep. Moore continues to falsify reality: “The inability or outright refusal to recognize the barriers black women encounter in accessing quality prevention services and reproductive care walks the line between sheer blindness and malice.” Black women have abortions at rates 5 times higher than the majority population. They are obviously accessing places that claim to provide prevention services and “reproductive healthcare”. Although, Planned Parenthood’s vital medical services to women have only declined every year in the last 5 years, including breast cancer screenings (down 41.3%), pap tests (down 58.1%) and barely existent pre-natal care (down 53.8%).

Moore also cites a sloppy 5-year “longitudinal study” by the pro-abortion Bixby Center for Global Reproductive Health, referred to as the “Turnaway Study” which can hardly be trusted. This is an organization that boasts that their work has led to: “new abortion methods, an expanded abortion industry workforce, and increased number of trained abortionists.” Their collaborative effort with the University of California resulted in their outrageous claim, and outright lie, that “95% of women who had abortions felt it was the right decision both immediately and over 3 years.” When contacted to join the study, 62.5% of the respondents declined to participate. More dropped off during the process leaving only 31% of the original post-abortive women contacted to participate. Yet these researchers used the non-representative sample to provide false results about poverty and post-abortive regret.

Commercialized abortion isn’t just about women being exploited, victimized, and sometimes even killed. It's about all three lives involved—mother, child (born and unborn), and father. We have an epidemic of fatherlessness in this country which directly causes increased poverty, higher abortion rates, and other negative outcomes. Communities that are fatherless are perfect prey for an industry that relies on men to abandon their responsibilities and their own posterity. In NYC, home of Planned Parenthood, there are 1,180 abortions for every 1,000 live births in the black community—more aborted than born alive. Compare that to 240 abortions for every 1,000 live births among whites and 610 abortions for every 1,000 Hispanic live births. Abortion apologists like Moore always talk about context, but never give any. Nationwide, Hispanics are uninsured at far higher rates than blacks, 24.4% and 15.9% respectively, yet have lower abortion rates. The poverty level among Hispanics, according to the U.S. Census Bureau, is almost identical to the black community—20.5% versus 22.5%.

How about access to the truth, Ms. Moore? GetYourCare.org is an online, easily searchable, database of over 13,000 comprehensive health clinics that provide far more real healthcare than Planned Propaganda, and without the violence of abortion. Sadly, Moore and her fellow pro-abortion Democrats pretend these thousands of resources don’t exist and legislatively try to shut down thousands more pregnancy help centers that offer real life-affirming care, at no cost, for mother and child.

The only extreme position here is justifying the deaths of those who could one day make history. Ms. Moore’s article is a reminder that many women and men confuse being empowered by being fooled by those in power. There is no dignity in willfully destroying our Future. There is no equality when it’s not extended to the most vulnerable among us. #BlackLivesMatter? #AllLivesMatter? Liberals like Moore show that hashtags are rather meaningless. Human beings, in and out of the womb however, are not.