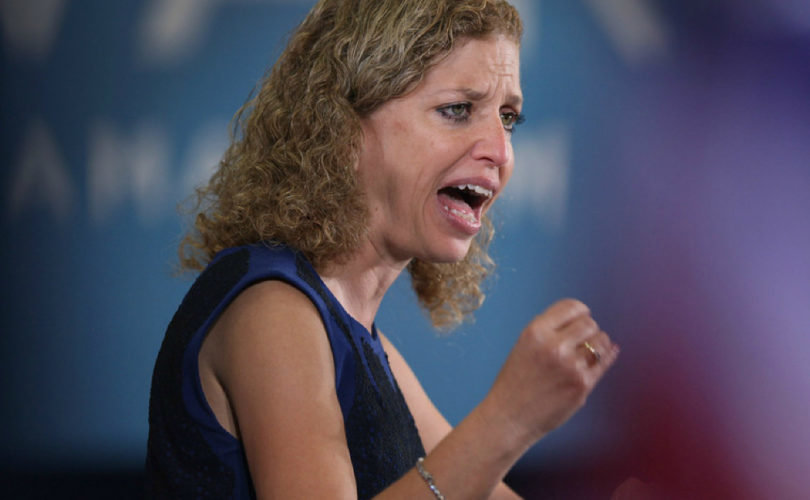 WASHINGTON, D.C., April 15, 2015 (LifeSiteNews.com) – It was a rare spectacle: A reporter spent several minutes on national television grilling a politician over abortion restrictions – and the politician was a Democrat. Debbie Wasserman Schultz, the chairwoman of the Democratic National Committee, got more than she bargained for when she went on The Kelly File last night.

Fox News anchor Megyn Kelly maintained a conciliatory tone throughout, but the questions became more difficult when she referred to the ongoing “spat” Schultz, a Florida congresswoman, has with Kentucky senator and Republican presidential hopeful Rand Paul.

The dust-up began last week when a reporter asked Paul – who has backed pro-life bills with and without exceptions for rape and incest – whether he supports abortion following rape. Paul took the opportunity to lash out at the media bias:

Why don't we ask the DNC: Is it OK to kill a 7-pound baby in the uterus? You go back and go ask Debbie Wasserman Schultz if she's OK with killing a 7-pound baby that's just not born yet. Ask her when life begins, and ask Debbie when she's willing to protect life. When you get an answer from Debbie, come back to me.

Schultz volunteered: “I support letting women and their doctors make this decision without government getting involved. Period. End of story. Now your turn, Sen. Paul.”

Later that day, Sen. Paul told Wolf Blitzer, “It sounds like her answer is yes, that she's OK with killing a 7-pound baby.” He added, “Debbie's position, which I guess is the Democrat Party position, that an abortion all the way up until the day of birth would be fine.”

That pretty well sums up the DNC's official policy. The 2012 Democratic Platform proclaims that all American women – and probably illegal immigrants and undocumented workers – have the inalienable right to “a safe and legal abortion, regardless of ability to pay.” The DNC believes American taxpayers should fund abortions throughout all nine months of pregnancy.

However, Kelly pointed out on her program that 80 percent of the American people are opposed to abortion in the third trimester, and 65 percent oppose second-trimester abortions.

So, the party of abortion extremism has to find a way to address the issue without explicitly stating it is far outside the American mainstream (and is continually slipping farther away) without angering the abortion lobbyists that fund, campaign for, and increasingly yield the formal mechanisms of power within the Democratic Party.

Debbie tried to duck the question altogether. When Kelly asked when “life begins,” Schultz responded – truthfully – that “the question that [Rand Paul] was asked, and that he’s trying to deflect by pushing it out on me, is: does he support exceptions?”

Kelly conceded, “He hasn’t been explicit on it. But I’m wondering about you, because I have you tonight.”

For once, Kelly noted that the question of “exceptions” goes both ways. Does the Democratic Party accept any exception to taxpayer-funded abortion, at any time, for any reason?

“At what point is it appropriate to say it’s no longer between a woman and her doctor?” Kelly asked. “You would admit that you can't have women aborting third trimester babies just on a whim, right?”

Debbie Wasserman Schultz responded, “Certainly not on a whim.” But she couldn't name a single stage of development, biological milestone, parental motivation, or extenuating circumstance that would make disposing of a human life require more thought than deciding to dye one's hair.

What if the child has brown eyes? What if it's a girl, and mama wanted a boy? What if she's aborting a child four hours before she was due to induce labor?

“I can't tell you a specific date and time past which we, in all cases, are certain that that choice shouldn't be made,” Debbie declaimed, “because that decision is very unique and individual to the woman, and should be in consultation with her conscience, and her God, and her doctor.”

“That is a decision left to her,” she said. One might add, left to her whim.

The Democratic Party chair closed the segment by chiding Rand Paul to “stop deflecting and answer the darn question.”

Debbie and her ideological compatriots have already answered the question. We should be most careful not to miss their terrifying answer.

Rand Paul backs use of abortion-inducing drug as ‘birth control’
Rand Paul introduces Life at Conception Act in U.S. Senate
Rand Paul promotes bill to ‘end abortion on demand once and for all’
Sen. Rand Paul clarifies remarks on abortion, confirms he is 100% pro-life