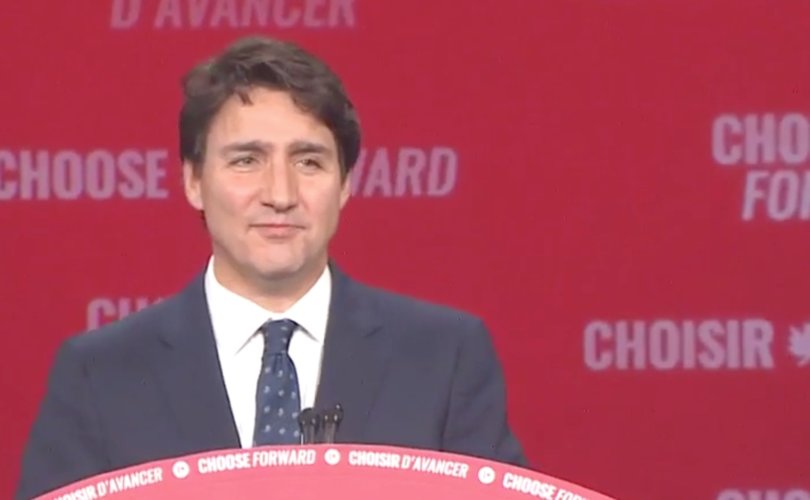 (LifeSiteNews) — You have no doubt heard the things that Prime Minister Justin Trudeau has been saying about the Freedom Convoy truckers and their supporters.

According to him and his pea-sized intellect, the truckers are racists, Nazis, hateful, anti-science, irresponsible, and so on. In addition, they like to desecrate historical memorials and statues, and are pretty much the worst people to ever live.

This “fringe minority” in the mind of Prime Minister Blackface is a group of radical individuals with “unacceptable views” who do not represent Canadians.

I don’t really know how Trudeau defines a Canadian, but I imagine he and I would disagree.

At any rate, as is common with Marxists and Faucian fascists, the truth of a thing is an afterthought, and all that matters is the narrative. Trudeau has gaslit Canadians with lies and falsehoods that he has no issue vomiting forth bilingually.

So, what lies has Justin Trudeau told us today? Let’s dive in and debunk the nonsense that the Canadian PM just can’t help spreading faster than coronavirus.

It takes a Nazi to know a Nazi

The term Nazi has in some ways lost all meaning as it is thrown around by the left as an everyday pejorative to chastise anyone a leftist disagrees with. Everyone who holds to traditional socially conservative views is at risk of being called “Nazi” by some nutjob on the left.

Therefore, Justin Trudeau has resorted to his old tired tricks and labeled the freedom movement sweeping the nation as something tainted by Nazis. This is because there is footage of an individual holding a Nazi flag at the protest last weekend.

Now, there have been rumors that it might have been a plant from a provocateur, but this is hard to verify. However, I can tell you as someone who lived in Ottawa for years, that at every major protest there are always people waving strange flags for strange causes.

I recall seeing the hammer and sickle of the Soviet Union on more than one occasion at Parliament Hill, as well as Nazi flags and flags for other terrorist organizations.

Crazy people do crazy things and they like other people to see their crazy ideas in public. Whether or not there was an actual Nazi supporter at the protest is irrelevant, as the vast majority — tens of thousands — of supporters would have nothing to do with it, and it does not represent Canada or her patriots.

In addition, Trudeau himself was caught unwittingly signing a Nazi flag years ago; does this make him a Nazi? No, of course not.

However, his dictatorial style and willingness to coerce people into medical procedures under the threat of punishment while at the same time segregating the population into clean and unclean classes — that might actually make him more of a Nazi than he would like to admit.

Trudeau has also spread the fake news that the protestors and truckers are “desecrating” war memorials and statues of great Canadian heroes. Of course, this is not true of the truckers, but it is true of groups Justin Trudeau supports.

An image of some protestors parking their cars near the steps of a national war memorial surfaced on Twitter, and a liberal commentator said the protestors used the memorial as a “parking lot.” Now, cars should not have been where they were, but downtown Ottawa was completely jammed and some out of towners tried to find a place to park, and picked the wrong spot.

Thankfully, the Ottawa Police chimed in and made sure they moved, and said it was a very cordial endeavour with no issues.

Hi there — When asked by police to move, they complied and are no longer there. Thank you.

Now, contrast this with what Black Lives Matter supporters have done to statues in Canada and America over the past couple of years, and what the Every Child Matters movement did to facilitate the burning of churches and toppling of statues of former Canadian ministers across Canada.

Justin Trudeau fueled those movements, and they destroyed priceless patriotic and religious monuments.

Ezra Levant from Rebel News broke it down perfectly:

In addition, Trudeau says that what happened to a statue of Canadian hero, Terry Fox, was also unacceptable. For the unaware, Terry Fox was a brave young man who tried to run across Canada with a prosthetic leg to raise money for cancer research.

In reality, some trucker supporters put a flag and a placard on the statue, which is hardly a desecration. Also, it is a common thing for people to dress Terry up for a cause, but of course this cause is “unacceptable.”

The Canadian flag is not a symbol of hate Andrea. As for defacing the Terry Fox memorial….are you saying the Pride flag is a violent chilling act? Neither picture is offensive. Your narrative is crumbling and your disgusting virtue signalling is on full display. https://t.co/Ak9YMZfqoc pic.twitter.com/ToEajDz2E3

What is even more interesting, here is a video of the great Canadian hero lamenting how the liberal media even twisted his words in order to sell a narrative.

Terry Fox finding out the MSM twisted what he said. #FreedomConvoyCanada2022 pic.twitter.com/Pcu3YrQKf5

Nothing is sacred for the left and liberal media, not even men who give their lives to beat cancer.

Who is the real racist?

Trudeau has also called the freedom fighters “racists” for their insistence that they not be coerced into medical procedures against their will. This is absurd, especially considering one of the organizers, Tamara Lich, is an Indigenous woman from the Métis tribe, and considering the fact that there have been supporters from all races and backgrounds.

Honestly, Justin, can you really call anyone racist after having worn blackface so many times you can’t remember?

Trudeau is the real thief

As if he hadn’t insulted them enough, Trudeau made mention of the truckers supposedly stealing from the homeless by ransacking an organization called Shepherds of Good Hope, which serves the homeless in Ottawa.

I want to be very clear: We’re not intimidated by those who hurl abuse at small business workers and steal food from the homeless. We won’t give in to those who fly racist flags. And we won’t cave to those who engage in vandalism, or dishonour the memory of our veterans.

Well, turns out this is a dubious claim to say the least. Apparently, it was alleged that “members” of the freedom convoy harassed some volunteers at a homeless shelter. Now, there is no justification for harassment, this is true, however, there is no “membership” relating to the convoy by simply being in Ottawa while there is a convoy in town.

Whoever the idiots were that did something bad to a good organization, they should be dealt with. On the other hand, here is a video of the truckers actually providing food for the homeless.

The mainstream media won’t cover this, but truckers are providing meals for the homeless in downtown Ottawa.

Organizers also have pop-up pizza ovens, cooking food for everyone all over the city. These are the people Trudeau declares “unacceptable.” pic.twitter.com/KkHjJd73Px

Meanwhile, Trudeau has stolen two years of life from Canadians, and his policies are forcing people to lose their jobs so that they might end up in a situation where they too could become homeless.

There is more that could be said, but I think we have spent enough time pointing out the consistent failings of Justin Trudeau for one day.

Knowing him, we will have more to talk about very soon.