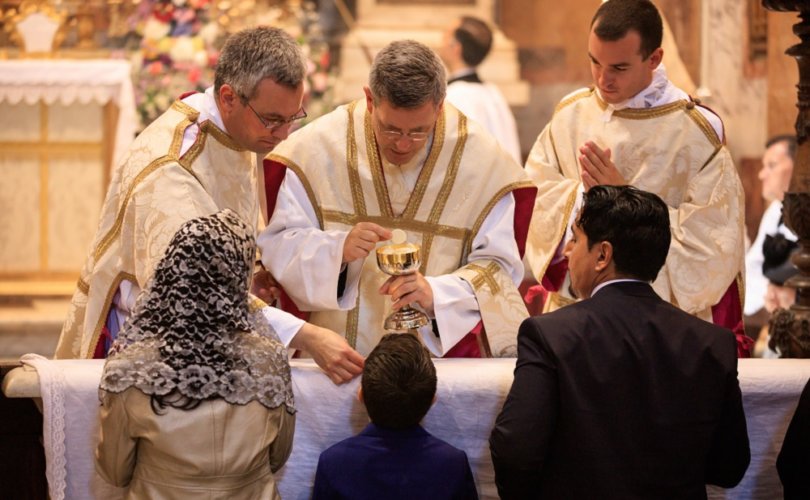 November 26, 2019 (LifeSiteNews) — Last week, on November 21, the feast of the Presentation of the Blessed Virgin Mary, Cardinal Müller and Cardinal Sarah were present at the abbey of Kloster Weltenburg in Bavaria for a pontifical Mass followed by the presentation of Cardinal Sarah’s latest book,  The Day Is Now Far Spent.

In his comments, the prefect of the Congregation for Divine Worship and the Discipline of the Sacraments returned to a favorite theme of many of his speeches and writings: the urgent need to recover a reverent manner of distributing and receiving Holy Communion. Like Pope Benedict XVI, Cardinal Sarah is a strong proponent of reception on the tongue by faithful who are kneeling. The consistent good example and lucid teaching on this matter from Pope Benedict XVI, Cardinal Arinze, Cardinal Cañizares, Cardinal Burke, Cardinal Sarah, and Bishop Athanasius Schneider, among others, have led countless Catholics to return to the traditional manner of receiving Our Lord.

But what about the famous passage from St. Cyril of Jerusalem’s Mystagogical Catecheses, used again and again to persuade Catholics that Communion in the hand is an ancient practice legitimately restored by the Church after the Second Vatican Council?

Coming up to receive, therefore, do not approach with your wrists extended or your fingers splayed, but making your left hand a throne for the right (for it is about to receive a King) and cupping your palm, so receive the Body of Christ; and answer: “Amen.” Carefully hallow your eyes by the touch of the sacred Body, and then partake, taking care to lose no part of It. Such a loss would be like a mutilation of your own body. Why, if you had been given gold-dust, would you not take the utmost care to hold it fast, not letting a grain slip through your fingers, lest you be by so much the poorer? How much more carefully, then, will you guard against losing so much as a crumb of that which is more precious than gold and precious stones![1]

We ought to note several things about this passage.

First, the extreme carefulness that St. Cyril demands of the one about to receive the Lord Himself, the King: not a speck of the consecrated bread should be lost — that would be like a mutilation of one’s body, a loss of something more precious than any created thing! It was, in fact, this very emphasis on the immense care to be taken toward the Eucharist, together with an ever deepening appreciation of the sheer magnitude of so divine a gift, that led the Church over time to abandon Communion in the hand and to prefer communion directly in the mouth. This is a primary example of organic development in the liturgy, which follows the implications of an original belief or attitude until the external expression most perfectly reflects and inculcates that belief or attitude. Conversely, the artificial return to a much earlier but long since discontinued practice — and one that now, suddenly appearing in a very different context, carries with it overtones of casualness and lack of faith in the Real Presence — is a primary example of the error of antiquarianism condemned in 1947 by Pius XII in Mediator Dei.

Second, if we look more carefully at what Cyril describes, and combine this passage with other hints from antiquity, we can see that even when Communion in the hand was practiced, it involved marks of reverence that (curiously?) never accompanied its re-invention in the late 1960s. In a forthcoming book, professor of Patristics Michael Fiedrowicz observes, concerning this passage:

It is significant that the Eucharist, laid on the right hand, is not then received by means of the less-valued left hand, but rather directly by the mouth. What appears at first glance to be communion in the hand reveals itself on closer examination to be communion in the mouth, with the right hand serving as a sort of paten. Bishop Cyril’s description shows that the attitude of the communicant is, then, not one of taking and capturing, but rather of reverent and humble reception, accompanied by a sign of adoration.

In his bestselling interview Christus Vincit: Christ’s Triumph over the Darkness of the Age, Bishop Athanasius Schneider — who, like Fiedrowicz, is a specialist in Patrology — goes into greater detail about the ancient ritual:

[T]he practice had a different form in ancient times than it does today: the Holy Eucharist was received on the palm of the right hand and the faithful were not allowed to touch the Holy Host with their fingers, but they had to bow down their head to the palm of the hand and take the Sacrament directly with their mouth, thus, in a position of a profound bow and not standing upright. The common practice today is to receive the Eucharist standing upright, taking it with the left hand. This is something which, symbolically, the Church Fathers would find horrific — how can the Holy of Holies be taken with the left hand? Then, today the faithful take and touch the Host directly with their fingers and then put the Host in the mouth: this gesture has never been known in the entire history of the Catholic Church but was invented by Calvin — not even by Martin Luther. The Lutherans have typically received the Eucharist kneeling and on the tongue, although of course they do not have the Real Presence because they do not have a valid priesthood. The Calvinists and other Protestant free churches, who do not believe at all in the Real Presence of Christ in the Eucharist, invented a rite which is void of almost all gestures of sacredness and of exterior adoration, i.e., receiving “Communion” standing upright, and touching the bread “host” with their fingers and putting it in their mouth in the way people treat ordinary bread. …

For them, this was just a symbol, so their exterior behavior towards Communion was similar to behavior towards a symbol. During the Second Vatican Council, Catholic Modernists — especially in the Netherlands — took this Calvinist Communion rite and wrongly attributed it to the Early Church, in order to spread it more easily throughout the Church. We have to dismantle this myth and these insidious tactics, which started in the Catholic Church more than fifty years ago, and which like an avalanche have now rolled through, crushing almost all Catholic churches in the entire world, with the exception of some Catholic countries in Eastern Europe and a few places in Asia and Africa. (223–24)

These words afford a backdrop for the disturbing admission made by one of Pope Paul VI’s closest friends, the eminent French philosopher Jean Guitton (1901–1999):

The intention of Pope Paul VI with regard to what is commonly called the [New Order of] Mass was to reform the Catholic liturgy in such a way that it should almost coincide with the Protestant liturgy. There was with Pope Paul VI an ecumenical intention to remove, or, at least to correct, or, at least to relax, what was too Catholic in the traditional sense in the Mass and, I repeat, to get the Catholic Mass closer to the Calvinist Mass.

As a result, says eminent liturgist Klaus Gamber, Catholics “are now breathing the thin air of Calvinistic sterility” (Reform of the Roman Liturgy, 5).

Moreover, as Bishop Schneider goes on to mention (and as he discusses at greater length in his book Dominus Est), in the early Church, a communion cloth was, at least in some places and times, laid over the hands of recipients so that they would not directly touch the Holy Sacrament and any fragments could be easily gathered. The Byzantine rite still utilizes such a cloth, held under the chins of those who are receiving in their mouths from a spoon handled by the priest. Some traditional parishes retain the use of a “houseling cloth” that covers the communion rail. While the invention of the handy communion paten renders the houseling cloth no longer necessary, traditional Catholic churches and chapels often retain it as an additional reminder of the sacredness of this Eucharistic banquet and a symbolic link between the people’s reception of the Lord and the cloth-covered altar of sacrifice on which the divine Victim has been offered. It underlines that they, like the priest, are partaking of a mystical sacrifice.

In short: The ancient record bears witness to beliefs and attitudes that would, over time, develop into the longstanding traditional communion praxis of both the Latin West and the Byzantine East. In the West, Communion on the tongue, kneeling, is the natural and suitable result of St. Cyril’s Eucharistic piety. The attempt to turn back the clock to antiquity — an antiquity, moreover, deceptively misrepresented and fictitiously reconstructed — is, in the end, nothing but a Trojan horse for Calvinistic sacramental theology.

What is at stake, therefore, is precisely those distinctively Catholic doctrines that a recent Pew Research survey indicates are rapidly eroding, even among those who still attend Mass. Cardinal Sarah, Bishop Schneider, and many others are pleading for a restoration of a traditional practice that emerged out of and reinforces the Catholic Faith. Will other Church leaders pay heed?

At the very least, right here and right now, every layman and laywoman can make a firm commitment, for the glory of God and the sanctification of their souls, always to receive Our Lord kneeling and on the tongue, at any and every Mass they attend, anywhere, at any time.