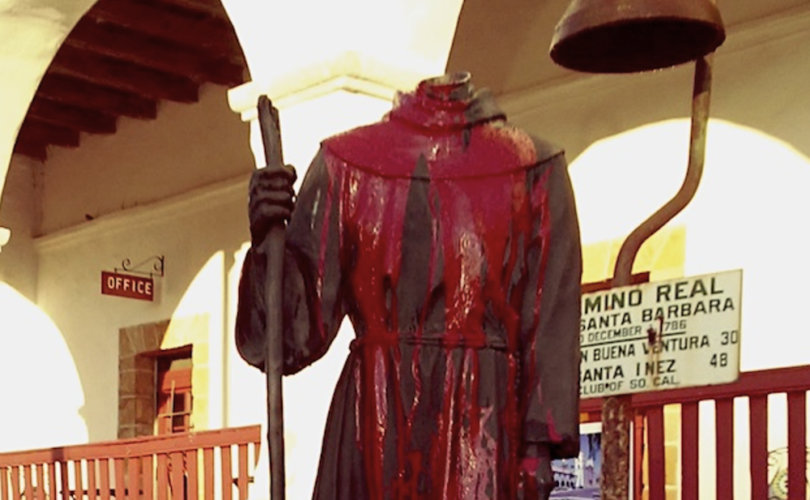 A statue of St. Junipero Serra was defaced in California.

Just last month another Serra statue was defaced at Mission San Fernando, just outside Los Angeles. The word “Murder” was written in large, blood-red letters down the front of his habit.

In May, a statue of St. Joan of Arc in New Orleans’ French Quarter was spray painted with the words “Tear it down!”

And at a Catholic retreat center in Indiana, a statue of the Blessed Virgin Mary was knocked over in the middle of the night.

After this summer’s assault on statues around the country, Marshall Connelly of Catholic Online asked, “Where does this movement stop?”

“While the public appears to be in a frenzy over controversial statues, St. Serra is a Catholic saint, and his statue is a religious icon,” Connelly said. “Of course, the non-religious do not appreciate this fact.”

Connelly continued, “There is a growing movement afoot to sweep distasteful moments and people out of history. While objective history is static, it is often clouded by time and perception. History is constantly being revised as political and social attitudes change. The heroes of one time and place are often villains in another.”

The question is, “where does the revisionism end? After the statues, what next? The names of streets, buildings, and cities? Should the money be reprinted to avoid any association with slavery? Should the Constitution be discarded or rewritten because its authors were slaveholders? And who will write the new one?”

Outside and inside the Church

This sort of madness is not only happening in our politics, in the public square. It’s going on inside our Church.

A Catholic school in California recently removed 162 icons and statues of saints in order to be more “inclusive.”

The Marin Independent Journal reported that parents of students at San Domenico School in San Anselmo are concerned the statues being removed is just the latest incident that demonstrates the school's declining Catholic identity.

In another move that makes the school less Catholic in order to be “more inclusive,” San Domenico's school counselor consults with students on issues of “LGBTQ awareness,” according to the “student support” page on its website.

“The Dominican teaching philosophy is not to teach there is only one truth,” explains Mirza Khan, San Domenico's director of philosophy, ethics and world religions. “It is to foster conversation, to intentionally invite in participants that have different perspectives in a very open-ended process of philosophical and spiritual inquiry. That has been a long-standing part of the Dominican tradition.”

St. Junipero Serra: An important icon of Christianity that the Left must destroy

Serra was beatified by St. John Paul II in 1988. Pope Francis canonized him during his trip to Washington, D.C., in 2015.

Born in Spain in 1713, Serra joined the Franciscans when he was just 17 years old. He later became a missionary priest in America, risking his life to save thousands of souls, founding nine missions along the California coast in the 18th century.

But that’s not what the political Left wants you to think. Radical groups like Antifa want to destroy western civilization and Christian values.

Their rhetoric creates a climate of hate and intolerance.

After the San Fernando Serra statue was defaced, Connelly asked the big question now on many minds. With the “statue of St. Serra vandalized, are Christian crosses next?