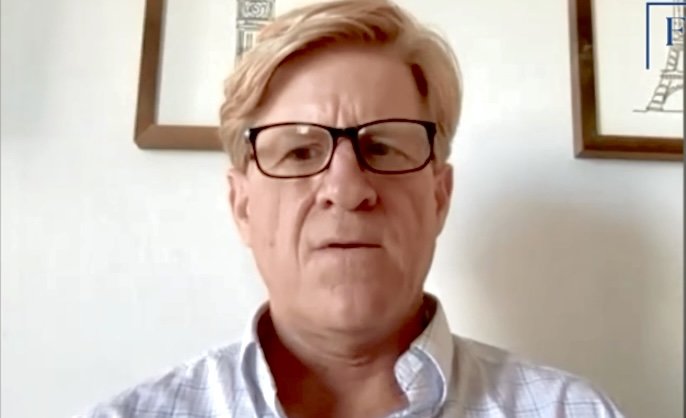 (LifeSiteNews) — Jack Maxey, the former co-host of Steve Bannon’s War Room show and a member of LifeSite’s Faith & Reason team, has found a large number of emails on Hunter Biden’s laptop that had been deleted but were retrievable. Among the emails, Maxey and his team discovered “numerous national security violations that we found today, which are horrifying,” as he told Ann Vander Steel yesterday for her Steel Truth Show.

In addition, the Maxey team found numerous e-mails that show the Biden family’s connection with Metabiota, the bio research company that is involved in the Ukrainian bio laboratories.

Maxey is currently in Switzerland for safety and is working with a team of computer and other experts on the content of the Hunter Biden laptop, a copy of which he received in October 2020 from Bannon for research. While preparing the laptop for public dissemination – Maxey has announced publicly that he will make the content in edited version available to the entire world within the next days – he and his team found that not just 128,000 emails were on that laptop but “double that number of emails; quadruple that number of photographs, documents that he [Hunter Biden] thought he had deleted.” “There are another hundred and ten, hundred and thirty thousand emails that no one even knew about. Let everybody know how bad it is,” he told Vander Steel.

As to the violation of national security, Maxey told Vander Steel that he cannot reveal the problem in detail for security reasons and that he has already contacted the U.S. Embassy in Bern, Switzerland. However, the Embassy has yet to call back.

But what Maxey was able to speak about are the ties of the Bidens to the bio labs in Ukraine.

“I have 100 percent, clear 100 percent, in writing evidence that Metabiota – you have heard me speak about this – that Metabiota [which] is inside Ukraine, working in those labs, is a DoD [Department of Defense] contractor, in writing,” Maxey said. “And just 15 minutes ago, we found documents that make it appear as if [Mykola] Zlochevsky, the crooked criminal chairman of Burisma, is actually one of the largest shareholders of Metabiota. And now America and the world can understand exactly why Joe Biden had to go over there and make sure that Zlochevsky was never prosecuted.”

As previous research on the laptop as well as a U.S. Senate report had shown, the Biden family is heavily involved with the Ukraine oil company Burisma, with Hunter Biden receiving $50,000 a month for years for sitting on its board. Joe Biden himself, when Vice President of the United States, met with a high-level representative of that company.

Joe Biden once himself bragged in public how he was getting an Ukrainian state prosecutor fired. That prosecutor was in the middle of an investigation of Burisma Holdings.

So when the head of Burisma is the largest shareholder of Metabiota, the link to the Bidens is probable. But Maxey posted hard evidence on his Gettr account. Among the posted emails is an email to Hunter Biden and his business partners from his own firm Rosemont Seneca. This email shows that Hunter Biden’s own firm has direct investments in Metabiota. John DeLoche, the managing director of Rosemont Seneca, wrote in March 2014 to Hunter Biden: “We had a great dinner with Nathan and Robert from Metabiota last night. They are looking to do a series A in a few months which would allow us to mark up our investment to 5X what we paid.”

The importance of Metabiota and its ties to the U.S. government become clearer when DeLoche continued: “They are digitizing the microbial world; what Palantir is to CIA, Metabiota is [to] the USDA [U.S. Department of Agriculture].”

According to one of the emails posted by Maxey, Rosemont Seneca was considering owning 33% of the Metabiota firm; it is not clear whether this turned out as planned.

But a more shocking email posted by Maxey reveals what Dr. Mary Guttieri, the executive vice president of Science and Microbiology at Metabiota, wrote to Hunter Biden about its larger plans for Ukraine. On April 3, 2014 – a few months after the Maidan Revolution and removal of the pro-Russian Ukrainian government – Guttieri wrote to Biden: “As promised, I’ve prepared the attached memo, which provides an overview of Metabiota, our engagement in Ukraine, and how we can potentially leverage our team, networks, and concepts to assert Ukraine’s cultural and economic independence from Russia and continued integration into Western society.”

Here, the involvement of Metabiota in Ukraine becomes very clear, as well as its involvement in the political-cultural agenda of the U.S. government at the time with regard to Ukraine.

“Yes, we were running labs inside Ukraine,” Maxey told Vander Steel on Tuesday. “Yes, Metabiota was in those labs.” And Zlochevsky, by being involved with the firm, was “getting a little cut in the grift on Metabiota when when the intel agencies are running a company. You get 5 x. And he got it.”

“This is the most criminal thing I have seen in my life,” the historian and political analyst concluded.

Maxey also pointed out that he believes this background story is the reason for Biden’s election, because they knew that they had, by their involvement in the Ukrainian biolabs, violated the rules for bio- and chemical weapons.

“We have been betrayed like nobody can imagine, and I’m going to tell you this is 100 percent why Joe Biden had to go get that [Ukrainian] prosecutor fired, 100 percent why Joe Biden had to become president [of the United States] because these guys violated the findings in the 2005 weapons of mass destruction document that was provided to the president of United States that was going to provide a blueprint for how to deal with everything from chemical, nuclear, and biological, and it was going to be done in a way that would have allowed for oversight by our elected leaders,” Maxey said.

Again, Maxey confirmed, from his insight into Hunter Biden’s files that the “Department of Defense was the one running Metabiota.”

A similar role was played by the company Black & Veatch, which worked with the Department of Defense to organize the biological research in Ukraine. This company also subcontracted Metabiota in the past. “They are in the [Hunter Biden laptop] documents, as well,” Maxey stated.

About Metabiota, Maxey says he has “been describing [it] as a dark operation from U.S. intelligence and U.S. health services since last summer. We now have dozens of documents proving that, in writing, everybody at Burisma knows about it. I have correspondence with Burisma executives talking about our secret biological projects in Ukraine.”

Even though Maxey never intended to do so with his research, it seems that his findings are actually going to vindicate some of the Russians’  claims about the U.S.-funded bio labs in Ukraine.