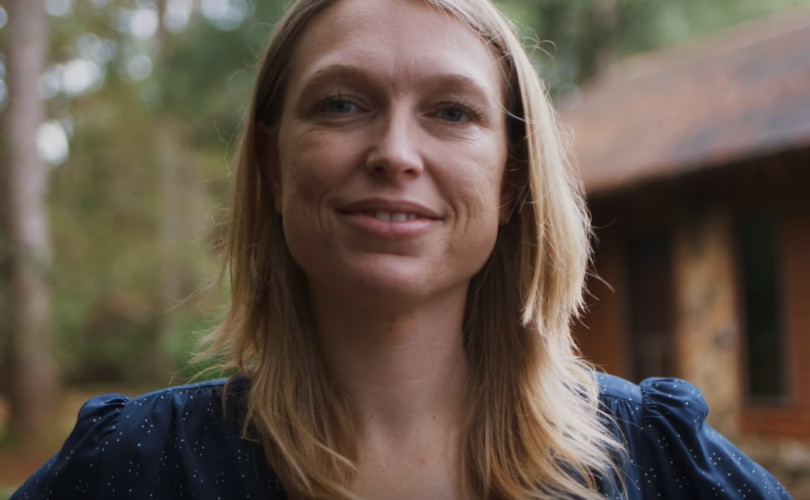 (LifeSiteNews) – If I told you that a young woman running for Congress decided to launch her longshot campaign with an intimate campaign ad that shows her on her Louisiana farm, playing with her beautiful blond little girl, taking care of their animals with her husband — and then going into labor and giving birth to a little boy, you might assume that it was a very pro-life TV ad. You would be wrong.

Louisiana Democrat Katie Darling fired up her campaign to unseat House Minority Whip Steve Scalise with an ad that features her husband driving her to the hospital, helping her from the car, and giving birth to a son while Darling’s voiceover explains that she is running to represent those concerned about “Louisiana’s abortion ban, one of the strictest and most severe in the country.”

This Katie Darling ad shows her going into labor with her infant son while she narrates the importance of pregnant women knowing they have the ability to abort their children pic.twitter.com/Om795olfbz

According to Darling: “We should be putting pregnant women at ease, not putting their lives at risk.”

She does not explain why protecting pre-born children such as her son puts her life or anyone else’s at risk, but she does feature some close-up shots of her daughter, presumably to make the point that her little girl will be less free unless she has the right to an abortion.

READ: Leftists and their media allies continue to shamelessly lie about late-term abortion

In short, Darling is narrating the importance of having the right to abort babies in the womb while zooming in on shots of herself with a baby in the womb — and ending with a close-up of that exact little boy, as if the imagery was designed to contradict her point.

As of June 24, 2022, Louisiana banned abortion with a handful of exceptions: to save the mother’s life; to prevent serious risk to the mother’s health; or if the baby in the womb is not expected to survive the pregnancy.

As a result of the ban, the grotesquely named “Hope” abortion clinic in Shreveport recently had to close after forty-two years when it ceased providing abortions on August 1.

In response, New Orleans public radio actually published an “obituary” for the abortion clinic rather than for the 3,000 children who died inside its walls each year. Media outlets have kicked into high gear attempting to portray Louisiana as a cruel and inhumane state for its pro-life laws, pushing headlines such as: “Louisiana woman carrying skull-less fetus forced to travel to New York for abortion.”

Darling’s campaign is a longshot as 70% of Louisianans are pro-life, making it the second most pro-life state in America, with 59 pro-life laws passed since 2006.

Congressman Scalise is open about his pro-life credentials, releasing a statement after the Dobbs decision stating that “this is our moment to protect the unborn”:

We know that if Democrats had their way, there would be unlimited abortion on demand, paid for by taxpayers. After the unprecedented leak of a draft Supreme Court opinion in May, Senate Democrats pushed for a vote on a bill that would legalize abortion through all nine months of pregnancy. Despite the efforts from abortion extremists, my Republican colleagues and I are committed to upholding the sanctity of life, protecting the unborn, and putting compassion and care at the center of our legislative efforts to help pregnant women bring more life into this world.

The Democrats may stand for many things, but there is nothing that they are more committed to than abortion.