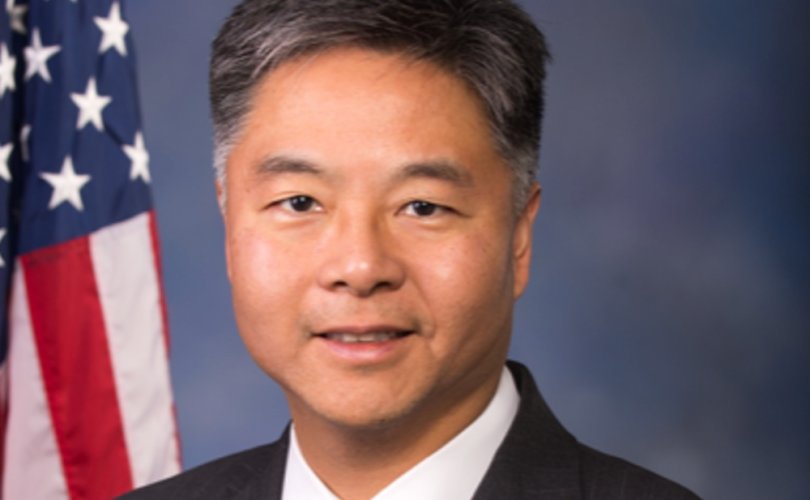 LOS ANGELES COUNTY, California (LifeSiteNews)— Liberal California Congressman Ted Lieu has been caught vacationing and enjoying the world while telling the U.S. House of Representatives that he cannot travel to D.C. “due to the ongoing public health emergency.”

RedState reported that Lieu “took his elderly parents on a cruise to Bermuda for Thanksgiving, then traveled to Hawaii for Christmas, and went to an NFL game at Los Angeles’ Sofi Stadium *maskless* with his wife and brother in October.”

The publication’s two articles contain photos of Lieu’s travels. When he is not challenging Catholic bishops to deny him Communion for a host of mortal sins he publicly promotes, he apparently enjoys vacationing.

On January 10, just two weeks after travelling to Hawaii, Lieu filed a proxy vote request, asking that another Congressman be allowed to vote in his place.

— Article continues below Petition —
PETITION: BOYCOTT IKEA for Discriminatory Policies Towards Unvaccinated Workers!
Show Petition Text
36197 have signed the petition.
Let's get to 40000!
Thank you for signing this petition!
Add your signature:
Show Petition Text

Lieu previously criticized the “tyranny of the minority” who were choosing not to wear masks as of July 2021, 14 months after the COVID shutdowns began.

“You have NO RIGHT to spread your respiratory droplets on me, on others, in public spaces and in businesses,” Lieu said in a tweet, responding to an account with 182 followers. “The majority of reasonable Americans are going to fight the tyranny of the minority who insist they can leave their saliva anywhere. And we will win.”

You have NO RIGHT to spread your respiratory droplets on me, on others, in public spaces and in businesses.

The majority of reasonable Americans are going to fight the tyranny of the minority who insist they can leave their saliva anywhere. And we will win. https://t.co/NrSnm7qh8a

“Conservatives laugh at Lieu’s stunts because we’ve been following common sense prevention measures instead of joining the Cult of Fauci,” RedState editor Jennifer Van Laar wrote, “but I wonder how the millions of fear-addled Democrats who literally only take the mask down to take a quick bite or sip, who don the mask as they drive solo in their Priuses, and who go into panic attack mode if another human being steps within their 6-foot bubble feel about Ted’s outright defiance of these new social conventions?”

“Will they even care? How do front-line workers, who cannot do their job remotely and are forced to be out in close contact with the unwashed masses, feel about Lieu using pandemic proxy vote rules as a way to play hooky from work?” she asked.