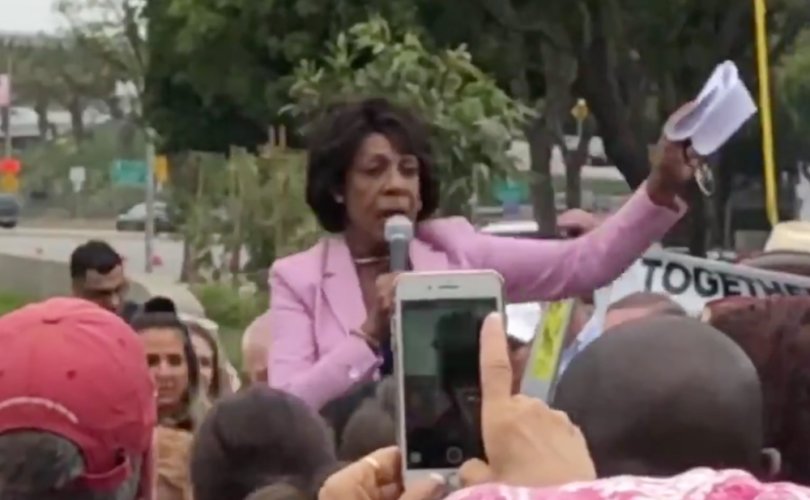 June 25, 2018 (LifeSiteNews) – On Friday night, Trump Press Secretary Sarah Huckabee Sanders was apparently kicked out of a Virginia restaurant because she works for Donald Trump.

“Last night,” she tweeted on Saturday, “I was told by the owner of Red Hen in Lexington, VA to leave because I work for @POTUS and I politely left. Her actions say far more about her than about me. I always do my best to treat people, including those I disagree with, respectfully and will continue to do so.”

As the Twittersphere exploded, National Review columnist David French’s response captured the situation succinctly: “Red Hen has a right to refuse service. Sarah Huckabee Sanders has a right to complain. Potential customers have a right to make their own decisions. I have a right to try to persuade people to stop politicizing everything. Freedom is easy to figure out—hard to execute.”

French is precisely right. Huckabee-Sanders (I met her once at a little conservative event a few months before she added the Sanders to her name) did what she should have done: She got up and left, rather than either making a scene or immediately becoming litigious like a gay activist in a cakeshop. The owner of the Red Hen can now feel as if he is a card-carrying member of The Resistance, and Huckabee-Sanders can let her followers know to avoid the restaurant as she heads over to Chick-Fil-A.

In contrast to the reaction of Huckabee-Sanders and David French, there is Democratic Congresswomen Maxine Waters, a hardline Planned Parenthood supporter who has dedicated her career to the promotion of abortion and nearly every other so-called “progressive” cause. Waters was enthused about the Red Hen incident, and predicted on TV that soon, Trump officials would not be able to shop at a restaurant, tank up at a gas station, or eat in any restaurant—because “the people are going to turn on them,” a rather worrisome turn of phrase.

Maxine Waters implies that people should “turn against” and “harass” those within the Trump Administration that defend President Trump’s agenda.

Maxine Waters calls for attacks on Trump administration: “If you see anybody from that Cabinet in a restaurant, in a department store, at a gasoline station, you get out and you create a crowd and you push back on them, and you tell them they’re not welcome anymore, anywhere.” pic.twitter.com/jMV7wk48wM

At a small “Keep Families Together” rally on Saturday, populated by people who apparently missed Trump’s executive order to end family separation, Waters tap-danced over to the line separating physical harassment from something more in her celebration of apparent stalking at the homes of Trump officials. “Already you have members of your cabinet that are being booed out of restaurants,” she shouted gleefully. “We have protestors taking up at their house who are saying, ‘No peace, no sleep. No peace, no sleep.’” So apparently “turn on them” includes showing up at their actual homes and shouting so that they can’t sleep.

Which is very true, of course. Just for the record, I’m with Princeton’s Dr. Robert P. George on family separation—absolutely opposed to it. I’m also opposed to open borders, and supportive of immigration enforcement, but there is a humane way to do so that does not involve splitting up children and their parents. It just simply seems extremely convenient that the champions of family breakdown—the Democrats and progressives (Black Lives Matter has the breakdown of the nuclear family listed as a goal on their website)—suddenly discover their empathy in such matters just in time to weaponize it against a president they despise.

As I’ve noted in the past, I don’t like comparing abortion to other issues, because I don’t think people should have to include a condemnation of abortion every time they talk about any other issue. But when someone has spent their life trumpeting support for one of society’s ugliest crimes against children—and when she and her colleagues didn’t waver in their support for Planned Parenthood for even a second when that organization was caught selling off baby parts like used car bumpers—I’ll take a pass when I hear them say things like “God is on our side” and that they are “on the side of the children.” Because the blunt truth is that they are on the side of the children that it is politically convenient to support at the moment, and opposed to the children who are politically inconvenient.

But moving past Waters’ support for violence against children in the womb—and the fact that some of the photos of crying children that were utilized to stoke up emotional reaction against family separation were apparently not of family separation, deeply damaging the credibility of progressive activists on this front—her calls for harassment of Trump officials is genuinely concerning. She can hate the president all she wants—as a Democrat, that’s pretty much her job—but when she starts celebrating activists showing up at the personal homes of those who work for the Trump Administration, things start to get more serious. It wasn’t that long ago that a Bernie Sanders supporter opened fire on Republican lawmakers after a baseball game, badly wounding Steve Scalise. If Trump Administration officials were abortionists, you can bet Waters would be screaming blue bloody murder.

Despite attempts by the Left to position themselves as the compassionate and loving party of the people, they have always brought with them an ugly undercurrent of violence. It is progressives who smash up university campuses and shut down speakers they disagree with. It is progressives who burn cop cars and smash store windows when things do not go their way. And it is progressives who believe, as a fundamental part of their revolutionary ideology, that violence is a justifiable means to a progressive end. Abortion is not the only evidence of this, but it is certainly that most tragic evidence of it.

That’s why when Maxine Waters starts to talk about the people “turning on” government officials, and then highlights the valor of those who show up at their homes with “God on their side,” it makes me very, very nervous.