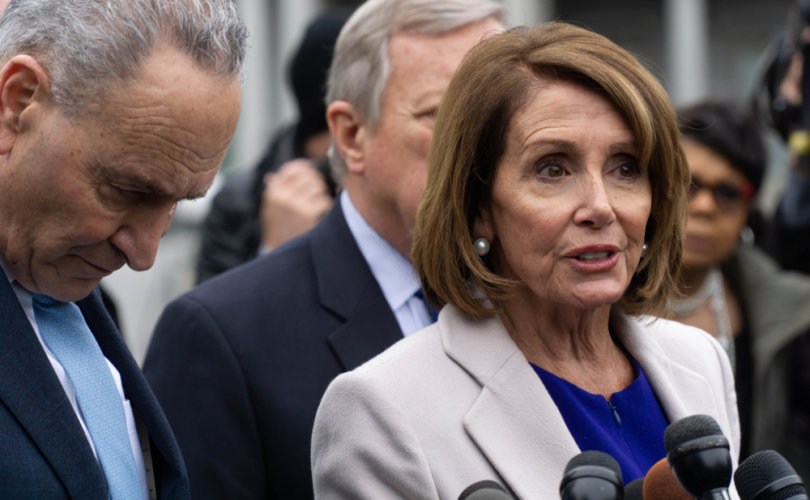 Democratic leaders including Nancy Pelosi address the media after meeting with Republicans to work out a compromise to end the partial government shutdown. Washington, D.C., January 4 2019Shutterstock.com

February 1, 2019 (LifeSiteNews) – The Democrats have overplayed their hand. I’ve never seen such a suicidal strategy on the part of pro-abortion progressives—and it proves that they’re getting genuinely desperate.

For decades, abortion activists and their political allies have wisely attempted to avoid the topic of late-term abortion entirely. Many insisted that partial-birth abortion simply did not exist, strategists warned behind closed doors that defending late-term abortion was a sure way to drive more people into the pro-life camp, and Nancy Pelosi even responded to a question about late-term abortion by ducking, dodging, and then demanding that her questioner be ashamed of himself because the question of killing third trimester infants is apparently “sacred ground” to her.

But then Hillary Clinton, the champion of the abortion industry, lost her bid for the presidency. She did so, it must be added, defending abortion at any stage in pregnancy, sending even reluctant pro-life voters into the Republican fold, but that lesson apparently remains unlearned. Clinton’s loss induced a well-publicized meltdown that continued with the confirmation of Neil Gorsuch to the Supreme Court and reached a crescendo with the collective shriek of rage and fear that met the replacement of Justice Anthony Kennedy with Brett Kavanaugh.

Progressives are now terrified that Roe v. Wade will be overturned and that legal abortion in the United States might be under threat. One abortion activist and journalist, Robin Marty, has already released a Handbook for a Post-Roe America and is warning her ideological allies that Roe’s days are numbered. I’m not so sure about that—we have no idea how Kavanaugh and several other justices would vote on Roe v. Wade, and the pro-life movement has snatched defeat from the jaws of victory several times in the past, when supposedly pro-life justices (Kennedy included) decided to uphold Roe.

But the best evidence for the desperation of abortion activists is their decision to whole-heartedly embrace late-term abortion. In New York, Governor Andrew Cuomo lit up landmarks with pink light to celebrate a bill that essentially permitted abortion until birth. In Virginia earlier this week, Democratic delegate Kathy Tran put forward a similar bill, and when questioned by Republican Todd Gilbert, admitted that her bill permitted abortion until forty weeks. Even, Gilbert asked, when “she has physical signs that she is about to give birth? She’s dilating?” There was an awkward silence, and then Tran’s response: “My bill would allow that, yes.” That same day, Tran had submitted a bill to protect caterpillars at certain stages.

Just as the wave of shock and outrage that met the New York late-term abortion bill had begun to recede, the Virginia bill set the debate ablaze once again. When Governor Ralph Northam attempted to defend the bill in an interview, he ended up simply horrifying people even further. “If a mother is in labor,” he stated, “I can tell you exactly what would happen. The infant would be delivered. The infant would be kept comfortable. The infant would be resuscitated, if that’s what the mother and the family desired, and then a discussion would ensue between the physicians and the mother.” In other words, late-term abortion involves killing an infant if the family decides to—and infants born alive could be left to die.

Videos of these exchanges have gone viral, racking up millions of hits. To many people, the agenda of the Democrats has suddenly become crystal clear: They are the party of abortion, regardless of how barbaric the procedure is. Democrat politicians are so afraid of recent pro-life gains and pro-life judicial appointments that they seem willing to stake out this ground, come hell or highwater—and in doing so, they have tipped their hand. They are becoming, as Trump recently tweeted, “the party of late-term abortion.” Trump also spoke for many when he noted that he had seen the defences of late-term abortion and simply found them “terrible,” reminding people of a famous debate moment: “Do you remember when I said Hillary Clinton was willing to rip the baby out of the womb? That’s what it is, that’s what they’re doing, it’s terrible…This is going to lift up the whole pro-life movement like maybe it’s never been lifted up before. The pro-life movement is very much a 50-50, it’s a very 50-50 issue, actually it’s gained a point or two over the years. I think this will very much lift up the issue because people have never thought of it in those terms.”

That is precisely right. Ironically, as the Democrats scramble to protect the abortion industry, their morbid enthusiasm for prenatal infanticide is causing ordinary Americans to recoil in horror. Vice President Mike Pence responded to the late-term abortion bills by penning an editorial for the National Review, noting that these procedures violate “every demand of human decency,” and that in his opinion, the “New York and Virginia bills aren’t some bold departure into a brave new world. They are the last gasp of a dying movement that stands in stark and irreconcilable contrast with our nation’s timeless founding principles.”

I hope the vice president is correct. I do think that this is a significant moment in the abortion debate, the moment where the Democratic Party abandoned all pretence of caution and threw their lot in with those who demand the right to kill babies right up until the moment of birth, and occasionally even after. Men like Ralph Northam demanded that everybody see him as the compassionate one in the debate, and nobody bought it. Because Cuomo and Tran and Northam were so blunt about what it was that their bills would permit and facilitate, they could not deny that these bills were death warrants for full-term babies. Perhaps they forgot how ugly and extreme that is. If they did, the American people are letting them know, loudly and clearly.